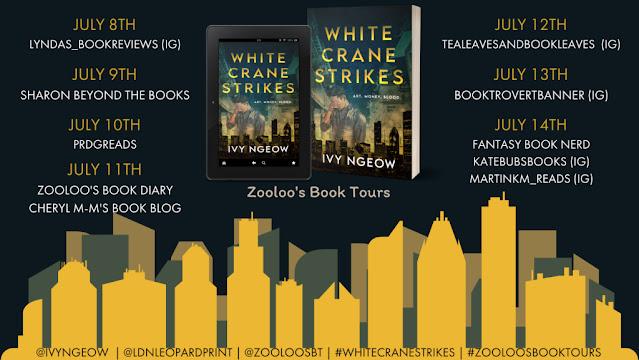 This one is a bit of departure from my usual repertoire as it is a crime drama set in 1970' US.

Before we get to what I thought about the book, I am going to give you some information about it, and the there will also be some info about the author, Ivy Ngeow. 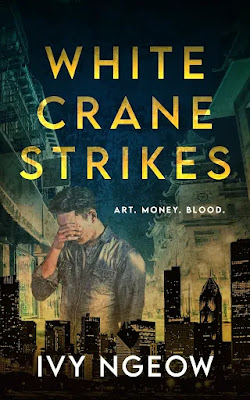 An enormous mansion. A Chinese restaurant. A baby on the way. Handyman Jerome “Jay Jay” Lee has landed a dream job. An underground tong seems to think so too.

Chicago, 1971. Jay Jay’s girlfriend wants a big knock-’em-dead wedding and a new bigger apartment with the whole ball of wax. Grateful when her art world schmoozing lands him a fixer-upper gig for a wealthy arts patron, he has no idea about the sleeping dragon he’s about to wake. His boss gets him a Chinatown side hustle, and Jay Jay looks the other way when he overhears an organized crime conversation for fear of losing the much-needed extra income and takeout treats. But when the Chinese restaurant manager vanishes, Jay Jay is trapped in threatening tong talk and the chow is now no fun. His family is now deep in hot soup.

Will Jay Jay be able to save them before he’s crispier than a burnt wonton?

White Crane Strikes is a standalone. Fans of Lehane, Ovidia Yu and Naomi Hirahara, who like compelling characters, stirring settings and surprising twists, will love this smart and witty thriller.

White Crane Strikes is a crime fiction novel set in 1970’s Chicago. It revolves around the main character, Jerome Lee (otherwise known as Jay Jay), a Chinese American whose father left him in childhood, and his pregnant wife, Dallas.

When we meet Jay Jay originally, he just starting a job as a handyman for down at heels Mr Alfred. A once wealthy socialite who has let his New York mansion fall into disrepair and ruin. Whilst looking at the place I order to fix it up he discovers a something that will change the course of his life.

In White Crane Strikes, Ivy Ngeow brings together both family drama and elements of the Chinese underworld. The book is mainly character driven as we follow both Jay Jay and his wife Dallas.

Instead of high-octane thrills and spills that would be associated with crime novels, Ivy Ngeow instead paints a very human picture of crime and its effects on others. In addition to this, it has a very human cost, and there is very little flashiness to the crime that we see in the book, and in all honesty, it is quite low key until the last act of the book.

Throughout the story, there is lots of character development with both Jay Jay and his wife. Initially they seem rather unconnected as Jay Jay builds his business up, tries to untangle himself from the demands that his family put on him, such as getting a job for Ernesto, who happens to be a disgraced cop, and is ultimately trouble.

On the other hand, his wife Dallas, a saleswoman in the local department store, and previously an artist has her own character arc. As Jay Jay spends more hours building up the business, she finds tha she is unfulfilled. However, this all changes when she meets a mysterious stranger, and a relationship develops. This is not a romantic relationship as such, but rather a platonic meeting of interests that Dallas feels that she does not readily explore and subsequently increases her frustrations. She becomes more embroiled with the man and a relationship develops that seems to revolve around her love of art and the missed opportunities that being a mother and wife now entail.

In essence, this is a period piece, set in the 1970’s, and Ivy Ngeow does a good job of evoking that time period. There were elements of the book that I did not particularly gel with, particularly some dialogue choices, but I was able to see the story that Ivy Ngeow was telling and move past my difficulties.

This is an interesting crime novel and approaches the action in a different manner, with Ngeow describing the issues as if they were happening on the side lines, seemingly far away from the main protagonist until it affects him personally.

As the book is mainly a character driven plot, you need to like the characters (or not like them but they need to be interesting!), and Ivy Ngeow does a good job of having a good cast of characters. Both the main characters are interesting, although they do engage in some actions that I did not understand their motivations for, which I am not going to mention as it would be a major plot spoiler. Equally, Dallas is a good character, and I quite enjoyed her character arc.

White Crane Strikes evokes a good sense of the period and immerses you in the story, with good characterisations, flowing prose and elements of mystery that you want to see solved.

Born and raised in Johor Bahru, Malaysia, Ivy Ngeow is the author of three published novels and numerous short stories, one of which has been performed and broadcast on the BBC World Service.

Others have been published in literary journals such as Burning Press, Lunate, Fixi Novo anthology and and also broadsheets like The Straits Times.

Her debut novel won the 2016 International Proverse Prize, and was published in Hong Kong in 2017. She holds an MA from Middlesex University where she was awarded the University’s 2005 Literary Press Prize, an international competition, out of 1500 entrants. Most recently, she was editor of Asian Anthology New Writing Vol.1 which was published in Feb 2022 in London. Her lates novel was on a longlist of 12 for the 2021 Avons x Mushens Entertainment Prize for commercial fiction by a BAME writer. Ivy is a regular suburban mum who loves dogs, cake and piano-pounding. She lives in London. 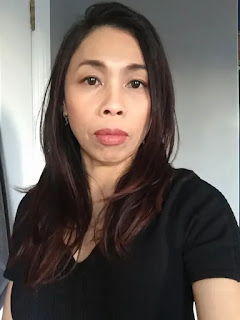