Series review - The Chronicle of the Unhew Throne

The Chronicle of the Unhewn Throne 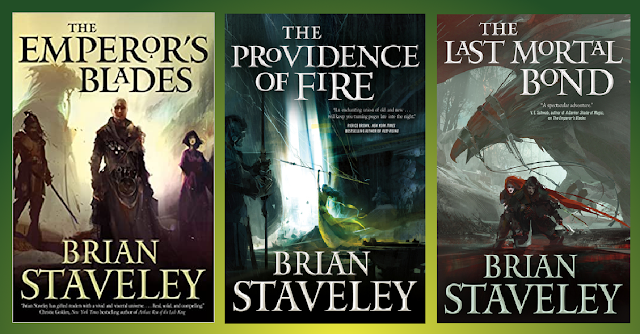 Something a little different today! Rather than do individual reviews for books as part of a series, I am going to look at the series as a whole.

Books in the series:

The Chronicle of the Unhewn Throne is an Epic fantasy set in Annur and ruled by a ruling family called the Malkeenians. Their right to rule is based around the fact that the ruler has ‘burning eyes’ which is seen as a blessing by the gods.

The empire is plunged into chaos when the Emperor is killed and in the line of succession, Kaden is the male heir. However, as a child he was sent by his father to learn the ways of an order of isolated monks called the Shin Monks who live in the remote mountains of the country.

In the meantime, his sister Adare who lives in the palace of Annur is coming to terms with her father’s death and is awaiting the return of her brother.

Amidst the turmoil, the middle son is training to be an elite soldier in a group of special ops soldiers called The Ketteral, which use giant hawks.

In all honesty, the premise of the series is quite familiar. The monarch dies, the kingdom is thrown into turmoil, arrmies amass in order to attack the seat of power, let’s get the kingdom back together boys for just one more show. Throw in Gods, ancient enemies, some assassins, lots of intrigue, some backstabbing yada, yada. Like I said, all pretty familiar to any seasoned fantasy fan, and let’s face it, there is nothing wrong with that. Most stories have a familiar premise to them. However, what is important is its execution, and that is what we are going to talk about here!

A word of warning!

This is a series review in which a plot unfolds over three books. In those books, major plot points are revealed. So, in order to avoid any spoilers, I am going to be a bit vague and gloss over them a little bit. You know, maintain an air of mystery and all that!

The main Characters (please excuse any spelling mistakes coz I listened to the audio, and it doesn’t give precise spellings)

Adare Malkeenian – Daughter of the Emperor of Annur

Kaden Malkeenian – Youngest Son of the Emperor (Shin Monk, and also the heir)

Il Tornja – Famous military leader and Regent in place of Kaden, who is off being a monk in some remote monastery and needs to get back to the capitol Annur

Triste – A courtesan in the story

Pyrre – An assassin, and priest of Ananshael {God of Death)

Balandin – A ketteral magic user (known as a leech)

Gwenna – recruit of the Ketteral and is commanded by Valyn

And lots of others, but they are the main ones.

Book One – The Emperors Blades

In this first book, we deal with the ramifications of the death of the emperor. Kaden, the heir to the throne is sequestered as a monk for eight years, undergoing the brutal raining associated with being a monk. Valyn is enduring the brutal training of the Kettral, and Adare is hunting the murderer of her father.

Book Two – The Providence of Fire

Kaden returns to Annur and sets in motion his view of the empire and is attempting to counter the plans of the enemies of the empire. Adare, flees the Dawn palace as the enemies of the state’s plans come to fruition and a coup is played out. In the meantime, ancient enemies of humanity are making themselves known and the Urghal, a tribe of barbarian nomads, are amassing in the in the north under a terrifying new leader.

Hunted by the empire, Valyn is now a fugitive and has seemingly joined forces with the barbarian horde, along with his team of crack soldiers.

We come to the conclusion of the series where everything starts to come together. The book starts a year after the events of book two.

Things have changed considerably. Adare and the republic are in discussion in order to repair the schism that has emerged. The plans of the ancient enemies seem to be coming to fruition and the Urghal army is now marching on Annur.

Let’s talk about the series.

I enjoyed the series as a whole. It is full of really good ideas and there are some interesting aspects to a familiar storyline. The first book itself, is a serviceable book that hooked me in. It has some good prose and the characters kept me entertained. Whilst the story dragged me in it is certainly not perfect for a number of reasons.

But first, let me tell you what I did like. I liked Valyn’s POV. An elite band of soldiers that literally swoop in (due to the fact that they ride giant hawks called Ketteral, and yes, the name is a little off because how many times in my head that they were called Kestrals, and due to the fact that they indeed do resemble kestrals meant that it kept getting stuck in my head with the name). Imagine something like the SAS that are used like knives to deal with the most difficult and secretive of missions.

Kaden’s POV, at times was a bit iffy! The group of monks that he gets sent to are brutal to their studets in order to teach them that they are empty vessels. However, the methods felt a bit like I had seen it before. And when it comes to Kaden as a character, I was a bit hit and miss to be honest.

Adare’s character really didn’t have any substance for me and I was hoping that she would. The book doesn’t seem to focus on her much at all, and when it did, I wasn’t that enamoured with her and I didn’t really like where she ended up.

The plot itself centred around the death of the emperor and trying to uncover the mystery surrounding it, with a couple of other mysteries thrown in for good measure.

However, I think that the weakest point of the book was its pacing. It was quite variable and at times seemed to drag, whilst, at other times it moved rapidly and brought in a number of elements that I liked. The point that it really gets going is the last third if the book.

The world building itself is good. Brian Staveley does an exceptional job of weaving it into the fabric of the story, avoiding info dumps and subsequently giving a immersive reading experience, and I liked the Asian influences that it brought in.

In terms of characters, Brian Staveley has some brilliant characters, with some of them firmly planted as some of my favourite characters in fantasy. Neera just made me howl with laughter each time she is on the page, and award for best character development goes to Gwenna.

Now, the problems that I highlight as whole aren’t major problems and didn’t put me off reading the rest of the story. However, the one major gripe that I have about this book is its treatment of women as a whole. Throughout the book, I wasn't that fond of the way that women were either described by their physical attributes or that they are used mainly as a plot device, like Halin, who it seems to me is there to move Valyn’s storyline on.

Contrary to that though, there is hope in the form of Pyrra, the skullsworn who as soon as she is introduced pretty much takes over the story and reignited my interest. There were other women in the story that are quite good, like Gwenna, but again, she is described initially by her physical attributes.

I think one of the reasons that I stayed with the book was due to the fact that I listened on audio which was read by the fantastic Simon Vance who adds that extra dimension to the story. Simon Vance's narration is always good and I find that the books he narrates, I have always continued with.

Onto book two! Upon reading book two, I was so glad that I stayed with the series as this by far is the strongest book. There is a massive improvement in this story as a whole, and the problems of the first book get addressed throughout. Adare is given more of the spotlight, but on the whole, I think the potential of her storyline does not meet expectations as she makes one bad decision after another, and I spent my time with my head in my hands just wondering why, why? She does have one great moment, but on the whole, what can you say.

In terms of the other two POV’s, Kaden does have the most development in this story. Revelations come thick and fast and we learn more about the plots that face humanity as a whole. This aspect of the story really fleshes out the series as a whole.

And then there is Valyn, poor Valyn who just cannot seem to get anything right, Throughout this book, his situation goes from bad to worse, with no let up.

Again, the characters are strong in this book, and this is where the two stars of the show make their appearance or become more in focus. I am mainly talking about Gwenna, who instead of being a side character to Valyn, comes into her own and really shines through as one of my favourite characters.

In addition to this, a new character is introduced, the old woman Neera. I just love her sardonic attitude to everything. She is foul mouthed and unafraid to let her feelings be known. She has no respect for anyone, and she cracked me up everytime she was on the page.

Finally, book three. What can we say about book three? For me there were some problems  again, mainly in relation to pacing. As with the other two books, the story is excellent, the characters are all good, especially Gwenna who continues to steal the show everytime she is on the page, and so does Neera, who again had me laughing out loud whenever she entered the verbal sparring match. However, the book could have been a few hundred pages shorter if we didn’t have a ton of background exposition and flashbacks which gets a bit repetitive after a while. Don’t get me wrong, there are some absolutely amazing bits, particularly the final dénouement of the story, but it would have been a stronger book for me if some of the other stuff wasn’t there.

So finally, would I recommend this series?

I think I most definitely would! There are lots of strong points in here. Brian Staveley is a fantastic writer and some of his prose is just brilliant. I think as a debut writer in the first book, he made some mistakes, particularly in relation to some female characterisations, but this got rectified in books two and three. However, on the whole, I felt that the ideas got in way of the pacing at some points, particularly book three where there seems to be a lot of exposition which at times impacted on the plot. However, there are some absolutely amazing things in there, and it is bolstered by some great characterisations, particularly Gwenna and Neera, and as I see that Gwenna is in the next series, I will be definitely carrying on. Oh, and in addition there is also another book, a standalone called Skullsworn that centres on another of my favourite characters Pyrra, the Skullsworn assassin