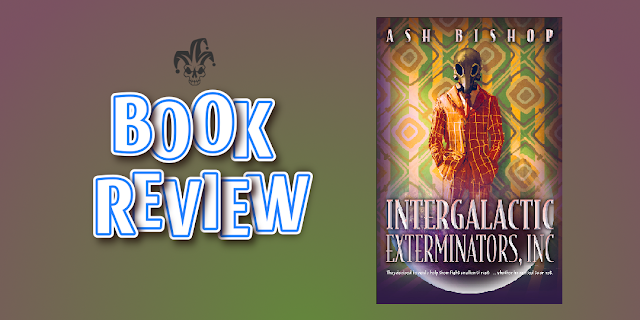 A sparkly new book to talk about today - Intergalactic Exterminators by Ash Bishop.

When Russ Wesley finds an unusual artifact in his grandfather’s collection of rare antiquities, the last thing he expects is for it to draw the attention of a ferocious alien from a distant planet. Equally surprising is the adventurous team of intergalactic exterminators dispatched to deal with the alien threat. They’re a little wild, and a little reckless. Worse yet, they’re so impressed with Russ’s marksmanship that they insist he join their squad . . . whether he wants to or not.

“This book is so much fun it ought to be illegal in all known galaxies. Ash Bishop has written a wildly imagined, deeply felt, swashbuckling page-turner. I loved it.” —Jesse Kellerman, New York Times bestselling author of The Burning 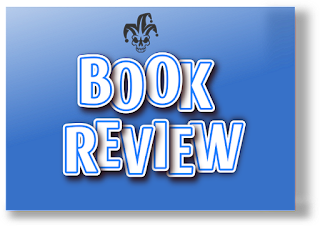 This was one of those books where I thought ‘that looks kinda interesting and fun, let’s give it a whirly - gig and see then shall we?’
So I did! And guess what? It was kinda fun!
The story revolves around Russ Wesley, a bit of a drifter who returns to the town where his grandfather lived after Russ hears of his death. We hit the ground running with the story and are immediately thrust into a situation where, after Russ hits a deer. He encounters a strange group of people who are seemingly hunting an alien creature which is in the woods near his home town. The incident is the catalyst for him becoming involved with a group of people called the Intergalactic Exterminators Inc. A group of misfit aliens whose job is to clean up other aliens’ messes.
Through a quick flash back we learn more about Russ, such as how after he has been to his grandfather’s funeral, he soon learns that his grandmother is about to lose the bookshop that is grandfather owned. He quickly tries to breathe life into the place by cleaning it up. This in turn leads him to find out that on the side, his grandfather also sold strange objects on the side via the internet in order to make ends meet, where he finds a strange rock. This in turn leads him to become involved with a local girl in the town who also happens to be a pretty smart electronics engineer and all round know it all called Nina.
The first part of the book brings us up to speed with the events prior to Russ meeting the Intergalactic Exterminators, and when we eventually get to the point where the beginning has some backstory, we learn that the reason for the visitation is due to one of these objects that his grandfather had acquired. However, he soon finds himself with an unwitting partner, Nina who manages to crash his party and also gets herself on the training program with an eye to helping her parents deal with crippling debts.
I have to say I enjoyed this story quite a lot. Don’t get me wrong, it wasn’t perfect, but on the whole it was light hearted fun that I found to be immensely entertaining. I think because it gave me a nostalgic feel, reminding me in some ways of 80’s Sci Fi films like Battle Beyond The Stars. Don’t get me wrong, it is nothing like it, but it had that kind of feel to it. I liked the characters. Russ and Nina in particular.
And I think one of the reasons for this was due to the fact that they weren’t perfect. Russ can be a little annoying, and Nina can be self serving and short sighted due to the fact that she has some things going off with her father and she is doing her level best to help him. Similarly with Russ. He seems to make a lot of bad decisions in order to help his grandmother keep the bookstore. In terms of the rest of the characters, they are a bit archetypal, but I didn’t mind that at all. It was a light and refreshing read, that had a decently paced plot, but also managed to get some decent world building in there as well.
Like I said, it wasn’t perfect, there were a couple of things that I didn’t like. I thought at first there is a rather large onus on guns, as this is the primary reason that Russ gets recruited into the Intergalactic Exterminators in the first place. And, in the first part there is quite a lot of information about guns, such as type and specifications about them that I think just did not need to be there.
In addition to that, there were a couple of instances where when the female protagonists were described, there was a bit of male gaze going on that did not need to be there in all honesty. On the whole, Ash Bishop did write some decent female characters, but there were some occasions where he described them in terms of body parts rather than how the characters actually were, but these instances were quite brief and I was willing to forgive the author and in reality, the comments were thrown out as Ash Bishop really didn’t do a bad job in most respects.
Intergalactic Exterminators Inc is a fun, enjoyable read that was pretty decently paced and more importantly kept me entertained