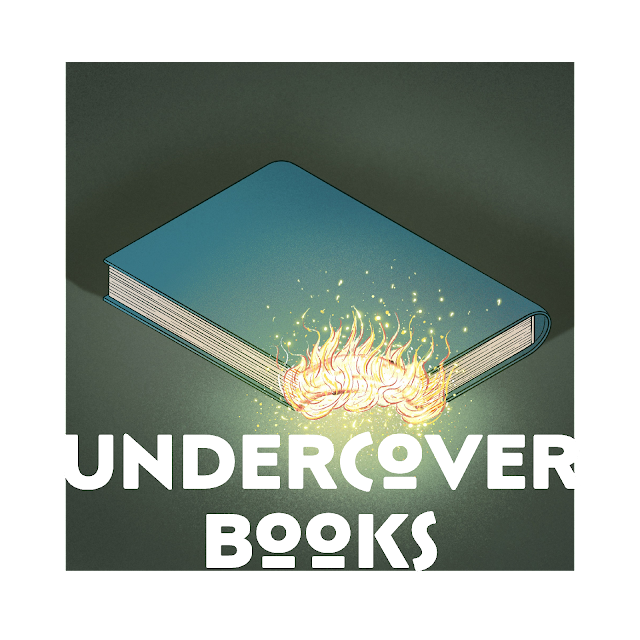 Today, I am going to talk about some that I have read, or are waiting to be read that I think should be talked more about, or haven't seen people discussing them often enough. Now, I want to be specific here, this doesn't mean that they aren't talked about, it's just that I haven't seen discussions or anyone drawing my attention to them. As we all know, there aren't enough hours in the day to read or catch up with all the books.
The books are in no particular order, so here goes. 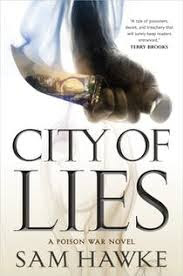 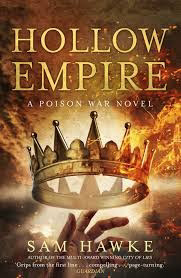 This is a brilliant Duology by Sam Hawke and includes the books City of Lies and the Hollow Crown.
Here's the book synopsis for City of Lies
Jovan wears two faces. Outwardly, he is the lifelong friend of the Chancellor’s charming, irresponsible Heir. Quiet. Forgettable. In secret, Jovan is a master of poisons and chemicals, trained to protect the Chancellor’s family from treachery.
His sister, Kalina, hides her frustrations behind a mask of calm. While other women of the city hold positions of power and responsibility, her own path is one of secrets and lies— hidden even from her own brother.
When the Chancellor succumbs to an unknown poison and a revolutionary army lays siege to the city, Jovan and Kalina’s structured world unravels. Trapped and desperate, they soon discover their civilized country also has two faces; behind the beauty and sophistication is an ugly past built on oppression and treachery…
Both books are fantastic thrillers set in a fantasy world and Sam Hawke won the premier award in Australia for SFF books, the Aurealis awards, and also the Ditmar Awards.
You can find reviews for both City of Lies & Hollow Empire on the blog.

2. The Stone Knife by Anna Stephens. 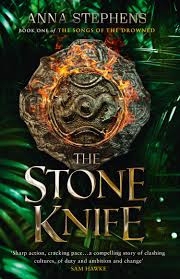 With the second book of the Songs of the Drowned Trilogy, The Jaguar Path being released in July, we need to talk about the first book The Stone Knife. I have yet to read the Godblind Trilogy, but I am aiming to read it this year. However, The Stone Knife simply blew me away. It is epic fantasy at its best and has a deaf protagonist, set in a Mesoamerican world. This tale is dark and bloody, but has so much else going for it. A queernorm society, a book where what people regard as a disability is in fact a strength. It truly is a fabulous book.

3. The Chronicles of Stratus Duology by Marc de Jager. 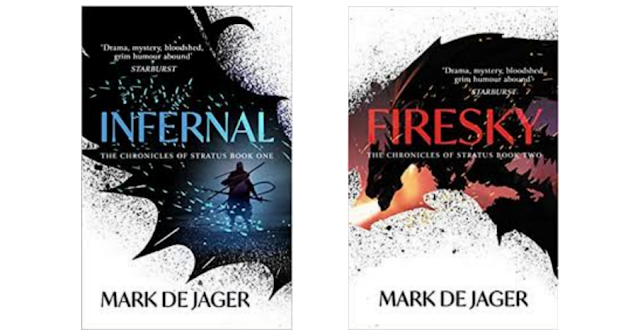 Another Duology. This time about dragons. This bloody and often quite funny fantasy is definitely one of my favourite reads. There are two books in the series, Infernal & Firesky.
In the first book we meet Stratus, a man who wakes up with no memory of who he is. He then makes his way to the largest city and ends up in the employ of the prince, and aiding them in their fight against The Worm King.

Now, I do see this one mentioned quite a bit, but not half as much as it should be. For me this is my favourite series by Mark Lawrence. It' s set in 1986 around a group of D & D playing teens. The main protagonist is boy genius who discovers he has cancer. This may seem like a maudlin tale, but instead Mark Lawrence fills this book with so much life, and with some times wimey shenanigans it's just a pure joy to read.
PS also read Mark Lawrence's short story Tiny Dancers. It's worth its weight in words! 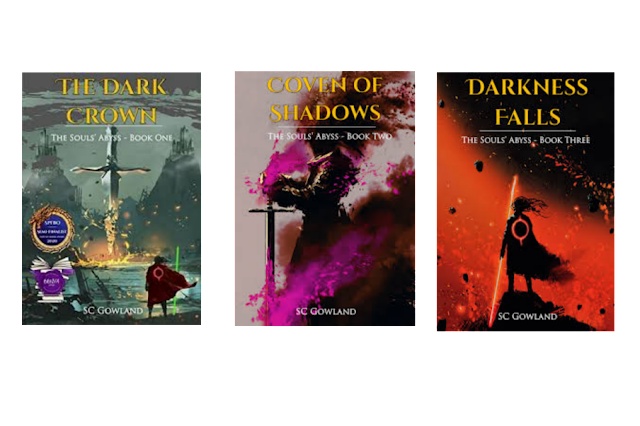 I have regularly given these books 5 stars because I quite simply love them. The story is full of adventure, brilliant characters and Panthers (which if you imagine battle cat from He - man you are about right). In amidst all this there are some star warsesque stuff in there as well with a magic system that resembles the force. It gears more towards classic fantasy, but hey! Who doesn't live a bit of classic fantasy.
NB. This series is getting a makeover, and these will soon become the old covers

6. The Many Lives of Stephen Leeds by 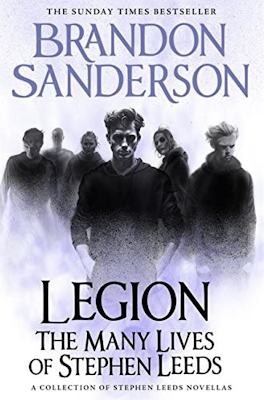 I bet you never expected to see an undercover book from the powerhouse that is Mr Brandon Sanderson, but yep I am going to add this to the list. This is a collection of three Novellas by Brandon Sanderson based on the genius adventurer, Stephen Leeds, a man beset by mental health problems who has a number of different personalities in his head. I really like this crime fighting adventurer who has a number of differing personalities in his head. Each one a genius in a field that Stephen needs to complete his missions, so there may be a weapons expert, martial artist, computer techie etc etc. I think you get the picture.
Right now to some books that are on my TBR but haven't read yet. However, they are languishing on my Kindle waiting for me to get to them.

7. A Night of Blacker Darkness by Dan Wells. 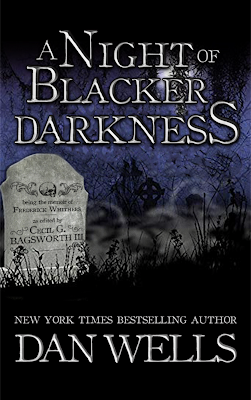 Dan Wells is the author of of one of my favourite films - I am not a serial killer. I picked this up a while ago, and it is available on KU
Here's the synopsis for the Night of Blacker Darkness
Wrongly imprisoned, Frederick Whithers is desperate to commit the crime he's already being punished for: defrauding the bank out of a vast inheritance. He fakes his death to escape, but when he's seen climbing out of a coffin everyone assumes he's a vampire; when he shows none of the traditional vampire weaknesses, they decide he must be the most powerful vampire in the history of the world.
Half horror and half farce, Frederick's tale is an ever-growing avalanche of bankers, constables, graverobbers, poets, ghouls, morticians, vampires, vampire hunters, not to mention some very unfortunate rabbits. With a string of allies even more unlikely than his enemies, can Frederick stay alive long enough to claim his (well, somebody's) money? And if he can't, which of his innumerable enemies will get to him first?

8. The Throne of Amenkor by Joshua Palmatier 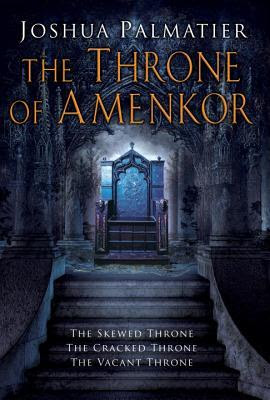 I got this one quite recently after seeing it on, erm.... Twitter I think. Anyway, I thought it looked rather interesting. Here's a synopsis.
The Throne of Amenkor Trilogy omnibus brings together The Skewed Throne, The Cracked Throne, and The Vacant Throne for the first time.
One young girl holds the fate of a city in her hands. If she fails, it spells her doom—and the end of her world.
Twice in the history of the city of Amenkor, the White Fire had swept over the land. Over a thousand years ago it came from the east, covering the entire city, touching everyone, leaving them unburned—but bringing madness in its wake, a madness that only ended with the death of the ruling Mistress of the city.
Five years ago the Fire came again, and Amenkor has been spiraling into ruin ever since. The city's only hope rests in the hands of a young girl, Varis, who has taught herself the art of survival and has been trained in the ways of the assassin. Venturing deep into the heart of Amenkor, Varis will face her harshest challenges and greatest opportunities. And it is here that she will either find her destiny—or meet her doom. 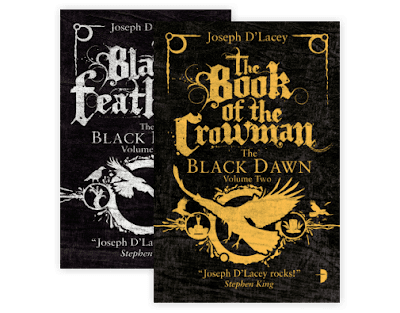 I have the first one of this duology on my Kindle. I picked this up after watching Trin’s book tube channel Portable Magic.
The book is written by Joseph D'Lacey, known for his eco - horror, Meat.
There are two books in this series, Black Feathers and the Book of the Crowman.
The synopsis for Black Feathers is down below
It is the Black Dawn, a time of environmental apocalypse, the earth wracked and dying.

It is the Bright Day, a time long generations hence, when a peace has descended across the world.

In each era, a child shall be chosen. Their task is to find a dark messiah known only as the Crowman. But is he our saviour – or the final incarnation of evil?

10. The Unhallowed War by Tim Akers 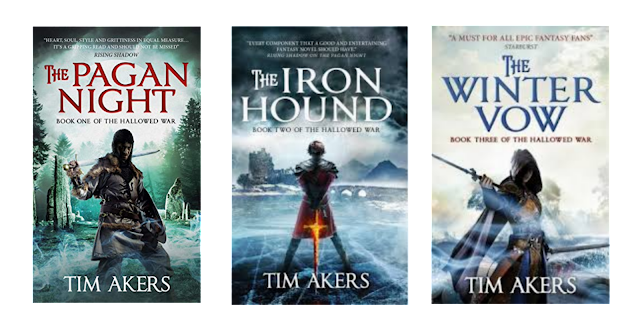 This Trilogy by Tim Akers is published by Titan books. Again, I have the first waiting to be read, but here is the blurb for the first book.The Pagan  Night -
The Celestial Church has all but eliminated the old pagan ways, ruling the people with an iron hand. Demonic gheists terrorize the land, hunted by the warriors of the Inquisition, yet it's the battling factions within the Church and age-old hatreds between north and south that tear the land apart. Malcolm Blakley, hero of the Reaver War, seeks to end the conflict between men, yet it will fall to his son, Ian, and the huntress Gwen Adair to stop the killing before it tears the land apart. The Pagan Night is an epic of mad gods, inquisitor priests, holy knights bound to hunt and kill, and noble houses fighting battles of politics, prejudice, and power.
And with this I will say goodbye. I have lots more books that could go on this list, and maybe I will do another feature to highlight them. Do you have books that you see no one mention. Leave a comment in my Twitter or Instagram page (I had to turn comments off here due to high spamming rates😭) 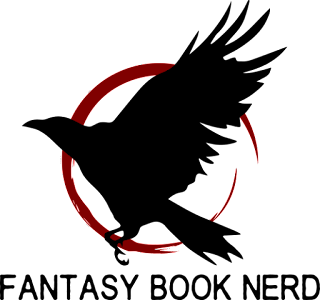