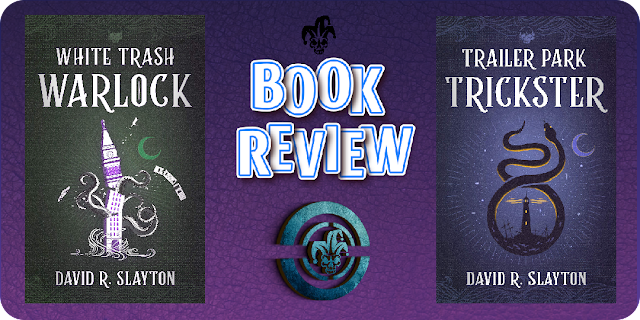 A couple of short reviews for you today. The first is White Trash Warlock, followed by it's sequel Trailer Park Trickster.

Not all magicians go to schools of magic.

Adam Binder has the Sight. It’s a power that runs in his bloodline: the ability to see beyond this world and into another, a realm of magic populated by elves, gnomes, and spirits of every kind. But for much of Adam’s life, that power has been a curse, hindering friendships, worrying his backwoods family, and fueling his abusive father’s rage.

Years after his brother, Bobby, had him committed to a psych ward, Adam is ready to come to grips with who he is, to live his life on his terms, to find love, and maybe even use his magic to do some good. Hoping to track down his missing father, Adam follows a trail of cursed artifacts to Denver, only to discover that an ancient and horrifying spirit has taken possession of Bobby’s wife.It isn’t long before Adam becomes the spirit’s next target. To survive the confrontation, save his sister-in-law, and learn the truth about his father, Adam will have to risk bargaining with very dangerous beings … including his first love.

I have had White Trash Warlock on my TBR for ages and never got around to reading it, so when I saw that it was on the included list on a certain audiobook site, I thought why not. You see, I was in that conundrum phase of picking my next listen. I have loads in my library, but I just didn’t fancy them at this time. So I needed something new to listen to, I just didn’t know what and hey presto! Hello White Trash Warlock. I have got to say that this is an impressive debut about twenty-year-old Warlock Adam Binder. Adam is basically a good guy; he goes around hunting magical artifacts that have been made from magical creatures and destroys them. However, he does have some family issues. For one, they don’t believe that he has magic and when he was a teen, his brother Bobby (now a happily married doctor, living in Denver, far from his poor upbringing and calling himself Robert Binder rather than his growing up name of Bobby Lee) had him detained in a school for ‘troubled’ teens. Adding to that, Adam is gay, and he knows that his family don’t accept that either. Thus, there is plenty of family conflict.

Whilst living in Denver, Robert’s (Bobby Lee) wife has been acting strangely. She has experienced a number of miscarriages and Robert calls his mother in to look after his depressed wife as she has been acting out of character. However, one day he realises that her mental health difficulties may not be as they seem when he witnesses a strange phenomenon, which leads him to contact his estranged brother Adam to help. What they discover is far worse than first thought, as in fact his wife is possessed by a powerful entity that has taken over Denver. Therefore, Adam investigates the phenomenon, leading him to the hospital that Robert works at and that there are strange coincidences. Whilst investigating, the entity possesses two security guards who attempt to ‘dissuade’ (ie, Kill) Adam from digging deeper. In the ensuing fight one of the guards is killed and the other is saved by Adam who impetuously binds his life to Vic Martinez, which in turn leads to confusing romantic feelings. This sparks quite a sweet romantic subplot between Adam and Vic. Amidst all that there is some intricate world building, a tense supernatural storyline involving elves, gnomes and leprechauns as well as a whole host of other mythological creatures. The story is full of action, snarky humour, intriguing characters, and is mixed with plenty of emotional nuance as Adam solves the mystery of the entity over Denver.

They are my harvest, and I will reap them all.

Returning to Guthrie, Oklahoma, for the funeral of his mysterious and beloved aunt Sue, Adam Binder once again finds himself in the path of deadly magic when a dark druid begins to prey on members of Adam’s family. It all seems linked to the death of Adam’s father many years ago—a man who may have somehow survived as a warlock.

Watched by the police, separated from the man who may be the love of his life, compelled to seek the truth about his connection to the druid, Adam learns more about his family and its troubled history than he ever bargained for, and finally comes face-to-face with the warlock he has vowed to stop.

Meanwhile, beyond the Veil of the mortal world, Argent the Queen of Swords and Vic the Reaper undertake a dangerous journey to a secret meeting of the Council of Races . . . where the sea elves are calling for the destruction of humanity.

Immediately following the events of White Trash Warlock, Adam Binder returns in this equally impressive second outing for the not too overpowered warlock. Fresh from the events of the first book, Adam has returned to his hometown of Guthrie to attend the sad departing of his favourite great aunt and magic Tutor, Sue.
Again, things are not as they seem as Adam discovers that there are mysterious forces abroad and her sudden death makes him suspicious that all is not as it seems. Especially when his not so lovely extended family are on the scene, in the form his Aunt Noreen and cousin Jodi, who are attacked in Aunt Sue’s trailer by the Shadowy Warlock that Adam has been hunting in relation to the evil artifacts in book one.
Obviously, this leads to local enforcement digging into the strange events that surround the Binder family and with Jodi becoming increasingly erratic, long buried secrets and old mysteries begin to surface.
Meanwhile Vic, Adam’s not so long-suffering boyfriend is discovering the world that Adam inhabits as he is waylaid by Elf Queen Argent, who takes him to the spirit world, where they discover that there is a scheme afoot by rival elves. Vic’s subplot interweaves with Adams and when they both intersect, it leads to satisfying conclusion to the book. Again, the book is just as good as the first with the world building and lore of the spirit world been built upon and expanded. We also see Vic and Adam’s relationship grow and learn more about the Binder Family. The open conclusion of the second book is going to have you pacing until the third instalment comes out.