Hello folks
Welcome to today's post. Today, it's a promo for Peter Hartog's release of his new audiobook Bloodlines.
The book is part of his The Guardian of Empire City, and he has recently released the second book in this series called 'Pieces of Eight'
Bloodlines was originally released in 2019 and is available to buy or on Kindle Unlimited.
So what is the book about? Those dark and terrible things from your nightmares are VERY real.
They walk among us, masquerading as your neighbor, your lover, even your friend. You see, Empire City is full of them…if you only know where to look. How do I know this? Well, for starters the name is Detective Tom Holliday. I work homicide for Special Crimes. My friends, what few I have, call me Doc.
And the other reason?
I’ve got magic of my own.
Welcome to Empire City, where magic and technology co-exist, and humanity endures behind walls of stone and spell-forged steel. A place where danger lurks around every street corner, and anything is possible.
When former hotshot homicide detective Tom “Doc” Holliday is recruited to join Special Crimes, he trades in his boring desk job for a second chance to do what he does best: hunt down killers.
And his first case doesn’t disappoint—a murdered woman with a bogus past, her body drained of blood, and two eyewitnesses wasted on the designer drug goldjoy claiming a vampire did it. Armed with a fickle clairvoyance and saddled with a team whose past is as checkered as his own, Holliday embarks upon an investigation through a dystopian landscape filled with bio-engineered vampires, interdimensional shadow parasites, and the magical masterminds behind it all.
But to solve this murder and safeguard his city, Holliday will have to uncover the truth behind an ancient shadowy conspiracy and confront a destiny he never wanted.
Fans of Ben Aaronovitch’s Rivers of London and Jim Butcher’s The Dresden Files will fall in love with Empire City.
What reviewers are saying about Bloodlines
Perfect for anyone who loves science fantasy or wants a wonderful, gripping, multi-genre read.
- Beneath a Thousand Skies
.....this book is virtually a non-stop thrill ride from beginning to end with moments of tension that work brilliantly in making this a very suspenseful detective story throughout. There are also flares of the fantastic and horrific that lend a depth to BLOODLINES and give it much more of a punch than your everyday noir fiction.
- Out of This World SFF
Bloodlines is a fantastic book to read with a coffee and listening to a TV soundtrack like the Expanse
- Amazon Reviewer
About the Author 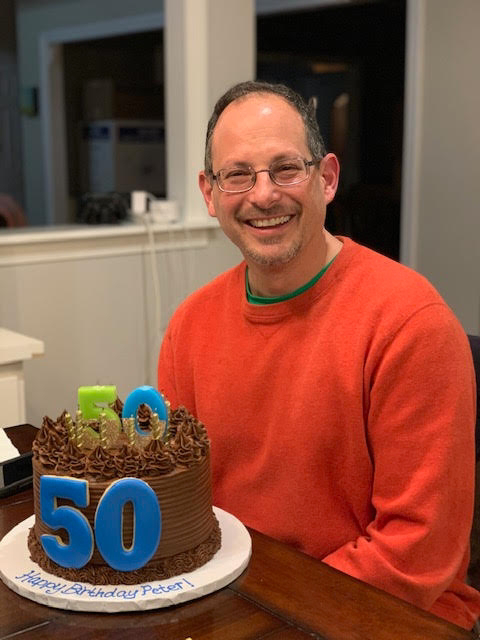 Born and raised in Massachusetts, Peter has spent the second half of his life in the Deep South. Despite being an unapologetic damn Yankee, that hasn’t stopped him from appreciating mild winters, Southern hospitality, or SEC football.
Peter has been an insurance professional for too many decades, which means before smart phones and the internet. Yeah, he’s THAT old, but he still enjoys all manner of science fiction and fantasy media, MMOs, reading, playing tennis, cooking, musicals, cheering his beloved New England pro sports teams, and the occasional good cry. He’s been playing tabletop RPGs since the golden age of The Keep on the Borderlands (which he still owns and has been kept in pristine condition).
BLOODLINES and its sequel PIECES OF EIGHT are Peter’s first attempts at novels but won’t be his last. A blend of science and urban fantasy mixed with dystopian crime thriller, his work has been lauded by Kirkus Reviews as “a riveting multi-genre tale with sharply drawn characters in a striking futuristic world.”
When he’s not reveling in geek nirvana, you can find Peter with his wonderful wife, two amazing sons, three fuzzy rescue cats and one fluffy golden retriever doing whatever it is a menagerie like that does.
You can find him as @althazyr on Twitter, as Peter Hartog on Goodreads, or visit his website at peterhartog.com to find out what he’s currently reading or his thoughts on writing, life and other random stuff.
Website: https://www.peterhartog.com
Twitter: https://twitter.com/althazyr
Blog: https://peterhartog.com/blog/
Goodreads: https://www.goodreads.com/author/show/18373280.Peter_Hartog
BLOODLINES IS OUT ON AUDIOBOOK ON OCTOBER 1st 2021