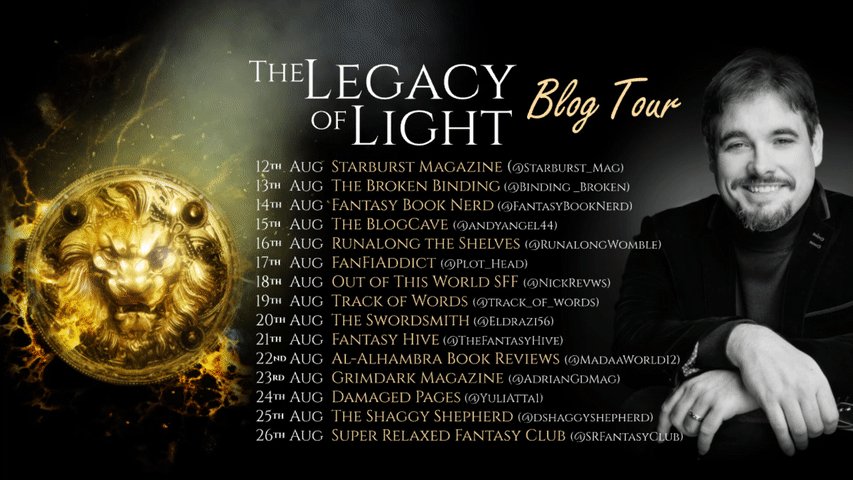 Welcome to Day 3 of the Blog Tour for the Legacy of Light by Matthew Ward, the culmination of the epic Legacy Trilogy.

There are loads of fantastic bloggers involved in the tour

As part of the tour I am pleased to announce that on Fantasy Book Nerd, Matthew Ward will be taking over this transmission and doing a guest post.

That is a lot of firsts!

So without any more waffle from me, I will hand you over to Matthew Ward

A little while ago, a question was doing the rounds on Twitter: What Three Things Does Every Fantasy Story Need? [1] With book three of my Legacy Trilogy – Legacy of Light – launching next week, this seems like a fantastic time to delve into yon question, doesn’t it?

(Obviously, this is one of those super-subjective lists, so if you disagree, you should absolutely share your thoughts in the comments below, or hunt me down on Twitter and tell me there.)

Thing the First: Something to Care About

Ideally, you’re going to want your reader to care about your protagonist. After all, they’ll be spending a lot of time together. But it’s important to note that your reader doesn’t have to actually like your protagonist. Many a story has played out to conclusion with the reader yearning for something appalling to happen to the lead [2]. Fondness is nice, love is better, but any emotional connection that drives the reader to turn the page is a winner.

As a second caveat, your reader doesn’t have to care about the protagonist. It’s perfectly fine for it to be something else, like the world building, the prose and so on. That said, it’s better if there’s at least one prominent character for the reader to cling to. Someone they look forward to showing up and strutting their stuff.

I’ll be honest, I’m a secondary characters man myself, maybe even tertiary. I love characters who can just be themselves, without the burden of shouldering the plot. If I love a story, you can bet it’s because I’ve latched onto a supporting act rather than the headliner, and there’s nothing wrong with that. A hooked reader is a hooked reader. Get ‘em any way you can.

I’ll be the first to admit that the Legacy Trilogy cheats in this regard. In each book, protagonist duties are shared across three or four characters, so there’s bound to be at least one that hooks the reader’s attention. Most folk seem to like all but one (although which one varies), but that’s okay. Someone always has to come last.

Thing the Second: Something that Shouldn’t Exist, but Does

This one’s easier. Every fantasy story needs a big bad, whether it’s your malevolent Dark Lord™ [3], the prospect of environmental collapse, some dreadful magical super-weapon, systemic oppression or a psychological burden. You might have a bunch of these, but one will be the main event – it’s the yardstick by which your protagonist’s success or failure is measured.

A balancing act is required here. For a fantasy story, you’re almost certainly going to want a speculative element powering the big bad. Magic’s the usual go-to, but there are other options – a creature that doesn’t exist in our world, for example [4].

The only real rules are a) That the empowering force should be something that cannot be understood – much less defeated – by the received wisdom of our workaday ‘real’ world, and b) The threat it poses must be an empathic one.

It’s no good having a Dark Lord whose threat doesn’t strike emotional resonance. Blarkon the Indefatigable can use the Ur-Power of Oblivion to collapse all the quasi-dimensions he likes if we don’t have a reason to care.

But if those empty dimensions are actually populated by innocents, or contain some kind of resource that’s vital to the survival of said innocents (or at least some arguably sympathetic characters) elsewhere? Well, that’s different. Hell, maybe one of those empty quasi-dimensions contains an irreplaceable piece of artwork crafted by the protagonist’s estranged, deceased father? How’s she supposed to get any kind of emotional closure if Blarkon turns the whole thing into lightly-scorched rubble [5]? It doesn’t matter how high concept[6] your speculative element is, so long as the stakes are clear-cut and engaging.

The Legacy Trilogy’s full of things that shouldn’t exist: bigotry, oppression, slavery, greed … but lurking behind it all is the threat of the Dark – the magic upon which all of existence was built. The Dark itself is a primal force, capable of great good and great evil depending on the will and intent of its wielder … but more often than not, it’s the perception of the Dark that leads to conflict.

Thing the Third: Something that Doesn’t Exist, but Should

Unlike Thing the Second, Thing the Third always wants to be wholly speculative. After all, there’s plenty of stuff in the real world that shouldn’t exist but does, and it’s easy enough to transfer them to a fictional environment. By contrast, things that don’t exist? Well, by their very nature they … don’t exist – you have to invent them.

As to the candidates? Again, magic’s a go-to [7], but if you really like unicorns or wotnot, set them loose on the unsuspecting reader and regret nothing. It’s worth noting, however, that this element can be speculative in either the real world, or the fictional one. Just as magic’s not much of a day-to-day occurrence hereabouts, maybe gunpowder doesn’t exist in your fictional setting [8]. Or, at the abstract end of the spectrum, maybe your world lacks light, sound, or the concept of peace. The important thing is to create a feeling of wonder in your reader, or else have your reader experience the reflected wonder of your setting’s inhabitants [9].

Case in point, in the Legacy Trilogy the light of the Goddess Lumestra is a versatile form of magic, once commonplace but now rare. It can heal, it can protect – it can even empower vast mechanical constructs – but more than anything, it can contest the Dark, just as Lumestra herself once did in ages past. By placing the protagonists at the heart of this age-old struggle, the engine of the story begins to turn.

And that’s the trick – whichever path you take, make sure to tie Thing the Second and Thing the Third together – that’s what gives your story and your world their identity. Thing the First gives you the means to have your reader pay attention to both. Get these right, and you’re well on your way.

Where will your story end? That’s up to you. As for the Legacy Trilogy? Well, helpfully I’ve written in all down in some handy novels, so you can find out for yourself …

Matthew Ward is a cat servant, creative consultant and author of the Legacy Trilogy, the final book of which – Legacy of Light – is available 19th August 2021. Follow him on Twitter (@thetowerofstars) or check out his website www.thetowerofstars.com.

[1] I’d credit the asker of the question here, but my search-fu is too weak to drag it out of the seething roil of tweets, retweets and replies.

[3] Or Lady. Or non-gendered title of their choosing. Even overbearing evil schemers have to move with the times.

[4] Dragons, vampires, werewolves or superluminal azure ghost-creatures etc. are only magical if the prevailing rules of your setting say they are. If they’re commonplace they’re mundane, and if they’re mundane they’re probably not magical at all. Just different.

[5] Blarkon cares not for the conventions of artistic criticism. Blarkon is forging a new paradigm.

[6] At some point, use of the word ‘bonkers’ seems to have fallen out of fashion.

[7] We can consider the various iterations of superpowers to fall into this category. You can claim Superman’s vulnerable to magic all you like, but how else does he fly? Magic, I tells you.

[8] Quoting from the classics: We can take these Deadites, we can take 'em! With science.

[9] Bringing us neatly back around to “Something to Care About”.

There we go, a round of applause for Matthew Ward everyone!

Before you go, below are some details about when the book comes out and a link . I am waiting expectantly for my own copy to come as I have ordered a signed copy to come from a very popular online indie bookshop, and I cannot wait to join the reviewing party. 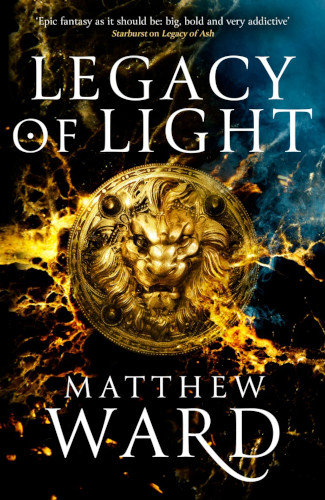 OUT ON 19TH AUGUST

AVAILABLE FROM THE PLACE THAT YOU BUY YOUR BOOKS

I also want to mention that Matthew's site, The Tower of Stars has tons of resources

for the Legacy Trilogy, such as maps, pronunciation guides, Recaps and lots of other things

that you will find most useful, and this is a resource that I visit very regularly.