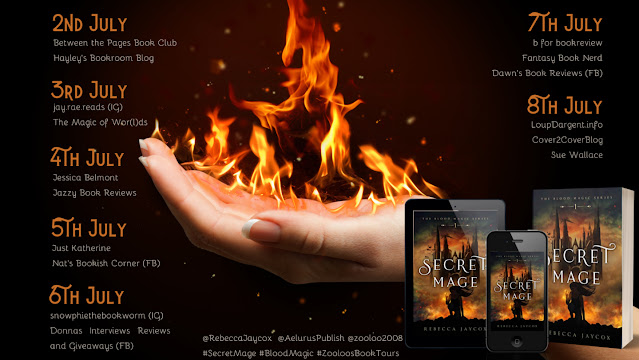 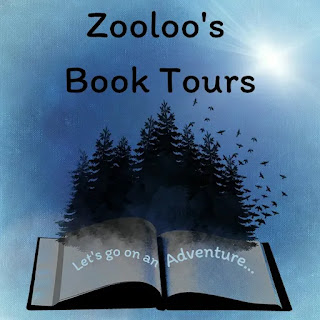 I am a little bit excited because this is my first time being on a blog tour for Zooloo's Book Tours. Today, I am going to be reviewing Secret Mage by Rebecca Jaycox, who if you want to know more about just press on the link.

As you can guess (because it is me!), this is a fantasy novel and if you move your little scrolly thing down there is some information about the book.

Reggie Lang might only be seventeen, but she’s had to grow up fast. Losing a father as a baby made things hard enough, but when her mom turned to alcohol for refuge, Reggie had to hold things together. She still does. If only she could escape it all …

When the other kids at school start calling her a freak, things only get tougher. What’s worse, she worries they’re right. Reggie shouldn’t be able to bring dead creatures back to life but somehow she can? If it wasn’t for her ride-or-die best friend, she’d have completely lost it by now.

When a mysterious man invades Reggie’s dreams, is it just another sign that she’s falling apart? He claims he’s her guardian – that he’s from another world. He tells her that her father’s killer is there …

… and that now an evil mage is gunning for her, destroying anything in his way.

Reggie’s always wanted to escape her life, but not like this. Does she really have to run to protect the people she loves? Who will take care of her mom? The man in her dreams says he’ll teach her about magic and protect her. That he’ll send someone he trusts to collect her. That her blood makes her powerful. It’s a hard choice, but ultimately protecting her mom is worth anything.

The magic-saturated world she discovers might be full of wonders, but the horrors are worse than she could have imagined. Can the man sent to guide her really protect her, or is the sign of his slavery an omen of what will happen to her?

Reggie will be pushed to her limits as she attempts her treacherous journey, struggling to adapt to a strange new world and learning to wield her powers. The Dark Mage isn’t easily evaded. He rules this world with a bloody fist. Because it’s blood he’s after—Reggie’s blood. And avoiding capture might just be the toughest thing Reggie has ever faced.

This is my first time reading a Rebecca Jaycox book, so I went and did a bit of digging - no, literally I had to dig a hole in the garden!

OOh, that is pretty terrible! Proper dad joke! Well, I am a dad so I have every right to tell bad jokes 😁

Anyways, where was I before I rudely interrupted myself? Oh yes, I was going to tell you about Rebecca Jaycox wasn't I?

Rebecca Jaycox grew up in the tiny town of Berryman, which borders the Mark Twain National Forest and the Courtois River about 70 miles south of St. Louis. The beautiful landscape fed her imagination, and she began writing stories at age 10 and never stopped.

Always seeking adventure, Rebecca moved to France after she graduated college with a journalism degree to teach English at a French high school. Bitten by the travel bug, she has recently visited Italy, Greece, Austria, Spain, and finally made it to her bucket-list destination of Istanbul last summer.

Reggie Lang is seventeen, and suffice it to say, she has a lot going on. She has a mother who has problematic alcohol use and mental health problems. In addition to this she has virtually had to bring herself up, and also look after her mother, acting as parent rather than a child, oh and I forgot to mention that her father went missing when she was a child. That would be enough for any broad shoulders, but there is more. She is being targeted at school and to top it all she has been experiencing inexplicable random acts of bringing dead animals back to life.

Obviously these random lazarus acts do have a perfectly logical explanation in that she is some kind of magical being (well, you did know there was something didn’t you?). Yep, she is magic and she gets frequent visits from this bloke who she describes as a cliche, and by the way he visits her in her dreams.

Welcome to Reggie’s world as she finds out about herself, her father and another world. You see through the course of the story, Reggie finds out that she comes from another reality called The Other, in which magic is a realty.

Secret mage is a pretty decent slice of portal fantasy, aimed at thirteen to eighteen year olds. Although, with the themes in the book, it would probably be aimed at the higher end of this age range as the book does deal with some more mature themes.

Rebecca Jaycoxs’s Secret Mage tugged at my attention from the start. Mainly due to the main character of the story, Reggie. She is equal parts snark and good heartedness and she is immediately engaging.

I have to admit, this is the first book that I have read by Rebecca Jaycox and I am quite glad that I got the chance to read this book, as normally I would have missed this.

The main characters in the story are vivd and relatable,  with the standouts being Reggie and Brwyn, the changeling elf. A number of different characters are introduced throughout the book including the main love interest Asher and the big bad Andrius Drake.

Unfortunately, I didn’t particularly gel with both Asher and Andrius to be honest. It wasn’t that they were bad characters, it’s just that they didn’t capture me wholeheartedly in this book. I didn't feel that there was much development in their personality,  although I think there may be more of them both as the trilogy progresses and it will be interesting to see how they develop later in the series.

However, I am willing to forgive these things that did not work for me in the story because Reggie is enough to carry the story by herself, as is Brwyn, who is duplicitous in his actions, but is intrinsically a good guy who is aiding the revolutionaries in the tale and is trying to aid the rebellion in his own way.
Throughout the book, Rebecca Jaycox manages to keep the plot moving at quite a bouncy pace. There are times when there are lulls in the plot, but that did not prompt any disengagement of my attention, again mainly due to the characters.

I enjoyed my visit to The Other. In fact I enjoyed this bit immensely, and Rebecca Jaycox builds a solid and believable world that she shows you through the eyes of the character, which is my favorite method of world building rather than massive info dumps.

The magic system is pretty comprehensible and again, rather than giving a mass of information about how the magic system works, we get to see it in action and discover its uses and limitations.

However, the strongest aspect of the book has definitely got to Rebecca Jaycox’s witing, She manages to pitch the tone just right and keeps you engaged in the plot. There are some times when my attention wavered, mainly when the romance enters into the story, but that is my problem, not the books.

What particularly impressed me was that Rebecca Jaycox does not shy away from pretty hefty subjects, such as mental health, problematic alcohol use, child carers and sex. Whilst there are scenes of a sexual nature, Rebecca Jaycox does not hide the fact that the characters have a sexual relationship and instead of portraying it as a bad thing, she presents it as a natural part of life, but remember to do it safely. And she deals with these other hefty subjects skillfully and with a light touch, highlighting how much of an effect that they have on an individual.

As a final note, it has to be mentioned that this book is a reissue and Rebecca Jaycox originally released this book as The Other Inheritance. However it has been revamped and a fantastic new cover by Molly Phipps added,  which is quite stunning and fits the tone of the book perfectly.

So , if you like your heroes to be part snarkiness, part good hearted with a dose of magic, then you cannot go far wrong with the Secret Mage.

NB: My thanks got to the publishers and Zoe for a pretty stunning copy of the book, which didn't affect my judgement at all. 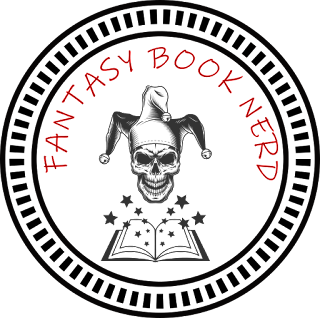