The Swordsman's Lament by GM White 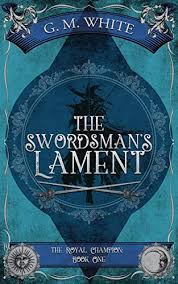 Good whatever time it is in the part of the world that you are living in when you are reading this post. I hope things find you well.
Today, dear reader, I have a review for GM White’s The Swordsman’s Lament, which I was sent by GM White (Ta very much!) who said ‘Ere, I have this book. Do you wanna have a look at it and maybe write something about it?”
So, obviously, I am not going to turn it down am I?
However, before we get into the review, I suppose we need a little ...  Book Blurb

A dead prince.
A grieving king.
A legendary swordsman accused of murder.
Loyalty counts for nothing when the king demands blood.
In the ancient city of Villan, wealth and power descend from proximity to the throne. As royal champion, and confidant to the king, Belasko thought he was beyond intrigues and machinations. But when the grief-stricken King demands vengeance for his murdered son, Belasko discovers he is expendable. His options are clear: find the killer or die for a crime he didn’t commit.
Forced into the city’s bleak underbelly as the palace mobilises against him, Belasko finds unlikely allies in his hunt for the truth. Can the veteran survive to protect his friends and prove his innocence?
Join Belasko as he hunts the real killer from the royal court to the depths of the city’s criminal underworld, finally learning the true meaning of The Swordsman’s Lament.
A story about friendship, betrayal and doing the right thing no matter the cost, this breakneck fantasy thriller is perfect for fans of David Gemmell, Sebastien de Castell and Miles Cameron

Now, when it comes to review writing, some are easier than others, and it is usually those books that I have really enjoyed that I find the most difficult to write about because I have so much to say.
Well here goes! I will try to get this out without falling in to too much gushiness. Oh, and I must mention, some of the references may be more relatable to people of a certain age, but I make no excuses, sorry!
The Swordsman’s Lament centres around our central character, Belasko. Master Duellist, teacher, advisor to the king and general friend of the stars. The story starts pretty much how it goes on, with a duel. Immediately, GM White sets up his main character, a good guy, skilled at fighting and generally nice to all those around him, unless of course you happen to offer him out in a fight, then you take your chances. Although, he will be pretty amiable to those that he is about to dispatch in a duelling contest.
After the bout of swordicuffs ends he returns to the Inn where he was dining, pays for any inconvenience and compliments the chef, the innkeeper's daughter Kendra, and offers her a job. He books a table at the inn and then comes back to the inn with the King of Villan and his family, subsequently giving her a job in the palace kitchens.
See, told you he was a generally good guy!
Thus starts a story of adventure and general chicanery that pretty much defines this zip wire of a plot.
To say that I loved this book, is an understatement. It is one of those books that reminds me of being a kid and the kind of stories and films that I watched and read as a child. It took me back to those dreary saturday afternoons where I would watch the saturday afternoon matinee and there would be films showing like Captain Blood or Robin Hood with Errol Flynn, or The Flame and The Arrow and The Crimson Pirate with Burt Lancaster. I absolutely lapped up these cinematic swashbucklers and it was these types of films that were my gateway into fantasy novels, as I wanted more things like this.
And guess what, The Swordsman’s Lament fits this bill perfectly. It just pressed the correct button, my happy nostalgia button that makes me feel warm and fuzzy and brings a smile to my face.
Belasko is a roguishly good guy who is instantly likeable and you cannot help but like him, and the rest of the characters are equally likeable (or dislikeable depending on their alignment).
Now, one of the things that I admired about GM Whites book is that whilst the book is short, he manages to fit so much in such a short space of time. It is a proper little Tardis of a book.
In two hundred pages, he manages to fit in backstory, world building and everything that you need to get you running along nicely with the plot.
This takes some pretty good writing chops, and I was instantly enamoured with it. The plot is a good action adventure that just sucks you in. Rooting for the good guy, and hoping that the bad guy and his scheming will be uncovered so that there will be some semblance of happy ever after.
I think one of the other things besides the plot and characters of the book. G.M. White writes fantastically vivid action sequences, which I freely admit. I love a good action sequence. They are typically flamboyant and swashbucklery and sated that desire to see a good sword fight.
Interspersed with this, is that element of comedy that you get in these types of books, but it is also levelled out with loss and grief.
So, if you want a book that is full of rambunctiously, spirited adventure, then The Swordsman's Lament is definitely your book.
And to top it all, this is the first time that I get to use this phrase (and I have been wanting to use it, like, forever!)It is a rollicking good read from start to finish.