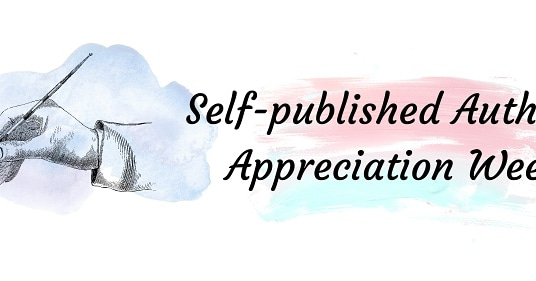 So if you want some recs for audiobooks out there by Self Published authors, I hope this will tickle your fancy

Now, the latest one (yesterday in fact!) that I have just bought is Dragonmage by ML Spencer. This is hot off the press and was just released yesterday. Obviously, I haven't had the chance to listen to this yet (or read it!) so I am looking forward to this one. 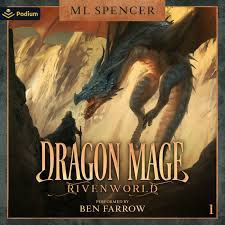 Aram Raythe has the power to challenge the gods. He just doesn't know it yet.

Aram thinks he’s nothing but a misfit from a small fishing village in a dark corner of the world. As far as Aram knows, he has nothing, with hardly a possession to his name other than a desire to make friends and be accepted by those around him, which is something he’s never known. But Aram is more.

Unknown to him, Aram bears within him a gift so old and rare that many people would kill him for it, and there are others who would twist him to use for their own sinister purposes. These magics are so potent that Aram earns a place at an academy for warrior mages training to earn for themselves the greatest place of honor among the armies of men: dragon riders.

Aram will have to fight for respect by becoming not just a dragon rider, but a Champion, the caliber of mage that hasn’t existed in the world for hundreds of years. And the land needs a Champion. Because when a dark god out of ancient myth arises to threaten the world of magic, it is Aram the world will turn to in its hour of need.
©2021 ML Spencer (P)2021 Podium Audio

This is one that I have just started, The Forever King by Ben Galley, and already this audio has grabbed me. 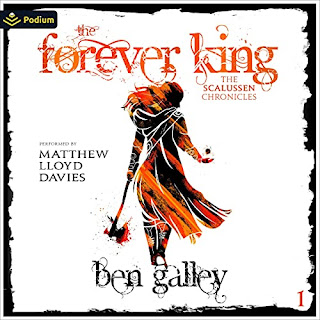 A brutal war against a vast empire. An immortal mage. Soul-drinking daemons. A trickster god with chaos in mind. And a girl with the future of the world in her hands. The Forever King is the start of an epic, blood-soaked fantasy saga.

In Emaneska, to consort with magick is to court death. Banned by the Arka Empire, magick's purging has finally brought peace to war-torn Emaneska.

Like any dutiful citizen, Mithrid Fenn wants nothing to do with magick. But when an illegal spellbook washes up on a beach after a battle between giant, unknown ships, Mithrid Fenn is thrust into a war she never knew existed. Her family slaughtered, Mithrid finds herself hunted by daemons and the emperor's assassins. She is dragged inexorably north to Scalussen, where mages, dragons, beast-people, and witches doggedly wage a war for freedom against the tyrannical empire. But Mithrid only cares for revenge and nothing nobler. If killing the emperor means helping the Outlaw King, then so be it. Even if it means drowning the world in fire.
©2021 Ben Galley (P)2021 Podium Audio

I have loved Susana Imaginario's Timelessness series and have only just finished The Dharkan. These books are quirky, snarky, strange and highly original. The narration by Sarah Kempton is just unblievably good, and now I cannot read the books without her voice in my head. Here is the Summary for both books 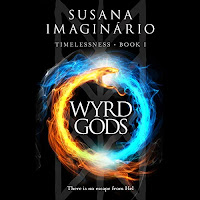 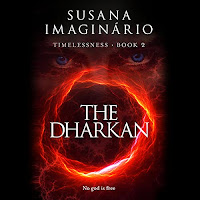 Chronos, god of Time, and creator of the Universe, wants to destroy Eternity.

And a reclusive Olympian deity does what no god should ever do: She answers a prayer.

As punishment, she is stripped of her powers and trapped in a mortal's body. Now a Wyrd - a fated god - she is haunted by the memories and thoughts of her host and must hide her true identity in order to survive in Niflheim, the rival Norse Underworld.

There she discovers the afterlife is not quite what it used to be. Niflheim's new ruler threatens the precarious balance of a world overrun with outcast deities and mortals alike.

To save her own sanity and find her way back to the stars, she must help the other Wyrd overcome their grievances to defeat this enemy, but those who would be her allies appear to have motives as hidden as her fragmented consciousness.

And yet it seems the greatest threat to her freedom comes from within, and the prize it seeks is her immortal soul....

The enemy is defeated.

The gods strike a truce.

And the Dharkan strike against the gods.

Victory has cost both gods and mortals dearly. The veil between life and death in Niflheim is thinner than ever. Try as they might, the gods are powerless against the influence of Time, and their past mistakes threaten not only their future but their very existence.

Now the fate of eternity rests in the unlikely alliance between the goddess of the soul and a soulless Dharkan, as they must work together to achieve peace between the living and the dead in Aegea. And although their goals may seem similar, the motivations behind them couldn’t be more at odds with each other.

The Keeper Chronicles by J.A. Andrews 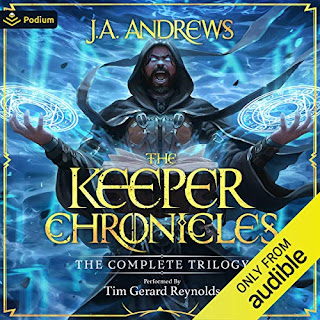 Classic Epic Fantasy. this is one of those that I didn't know anything about. I am about midway through this and am enjoying it immensley.

When Mallon the Undying threatened the land years ago, the elves stopped him - and then disappeared.

Now Mallon's followers seek to bring him back to finish what he started.

Only the Keepers - storytellers, historians, and magic-wielders - are left to stand against them.

Alaric, who betrayed everything he believed to save his wife - and still failed.

Will, a storyteller who’s convinced his weak magic makes him useless.

And Sini, a former slave girl with unimaginable power but no way to wield it.

Can they survive being hunted by dragons, attacked by frost goblins, and betrayed by traitors in their midst?

Or will Mallon's minions overwhelm them and plunge the land into darkness?

Now this is the second one in the Dead Sagas, and RJ Bayley just brings this one to life (and always gains a special place in my reading heart for the correct pronunciation of water!) 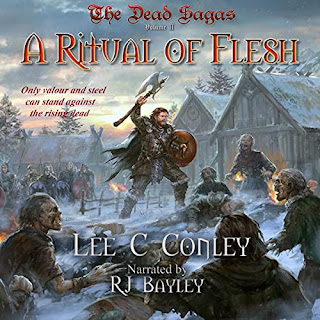 As evil ravages the north and the dead walk, all eyes fall to Arn.... The apprentice journeys south, home to the College, unaware of the dark events that transpired in the High Passes after his departure. His leg in ruins, and haunted by watching shadows, the College council in Arn awaits him, but he does not travel south alone.

In the capital, sickness awaits them all, as Nym has fled to the city and must now continue her struggle for survival on the plague ridden streets of Arn, keeping all who she cares for safe from the halls of Old Night.

The many threads of this Saga converge on the city of Arn, but amid plague, invasion and terror, a greater darkness is looming. Dark forces are seeking to unleash evil upon Arnar, honour and renown is all, and sword, axe, and shield is all that stands between the living and the grasping hands of the dead.

Again, one that I knew nothing about, but I was looking through my kindle unlimited subscription and seeing if it would do audiobooks as well. It did, so there you go, thought I give this one a go 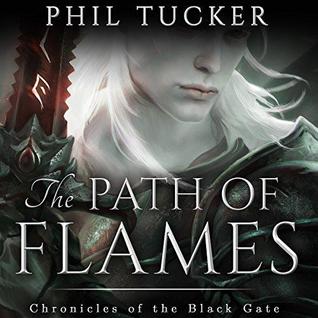 The first audiobook in the new epic fantasy series listeners are comparing to David Gemmell and Raymond E. Feist.

A war fueled by the dark powers of forbidden sorcery is about to engulf the Ascendant Empire. Agerastian heretics, armed with black fire and fueled by bitter hatred, seek to sever the ancient portals that unite the empire - and in so doing, destroy it.

Asho - a squire with a reviled past - sees his liege, the Lady Kyferin, and her meager forces banished to an infamous ruin. Beset by tragedy and betrayal, demons and an approaching army, the fate of the Kyferins hangs by the slenderest of threads. Asho realizes that their sole hope of survival may lie hidden within the depths of his scarred soul - a secret that could reverse their fortunes and reveal the truth behind the war that wracks their empire.

Unpredictable, fast paced, and packed with unforgettable characters, The Path of Flames is the first installment in a gripping new epic fantasy series.

©2016 Phil Tucker .
So, just some little tips on audiobooks. Now, as you can guess, there is no money tree at the bottom of our garden, so it pays to be a bit savvy.
Yes, I have a subscription to a couple of services (you can probably guess what they are), but they only go so far, so I am always looking on how to maximise credits, like looking on 2 for 1 sales. If there are £3 sales on, I may get an audio on that and save my credit (sometimes saving my credit for another month.
If you have a Kindle Unlimited Subscription, see of there is a corresponding audio. There are quite a few of these books knocking about.
The other thing is that I generally read on a certain device and usually you can buy the corresponding audio for cheap. Where this comes into play really well is when you buy those 99p books. Whatever price you pay for the book you can usually get the corresponding audio, so sometimes I have had the book and the audio for a really good price
So, as always thank you for reading!

And don't forget to have a look at the other bloggers who are doing this week. But beware, the TBR will grow. Mine did!