He was raised in secret, guardian of a mysterious blue orb that is his father's legacy. Can he learn to harness its power in time to defeat the oppressive robotic fleet that controls their system or will he die trying?

Crix, last of the Tolagons, possesses an immense power that he can never wield. That is until he is forced to activate the blue orb to rescue the beautiful and enigmatic Kerriah from her downed spacecraft. With the orb's unique energy signature revealed, the Marcks - Zearic's robotic army - relentlessly hunt him down for control of the artifact.

Kerriah, gifted with special and unique abilities, becomes his ally. As they escape the clutches of the Marcks, they are joined by the muscular war veteran Krath. But can Crix fully trust them, especially Kerriah whom he has fallen for?

As the trio evades their pursuers, forging alliances in the most unusual places, time is running out. Crix must discover the truth in the shadows of his dark past and rise up against Zearic and his cybernetic army. For him, there is no easy path.

Tolagon is a thrilling, dystopian sci-fi novel perfect for readers who enjoy a heart-pounding story full of adventure, action, and magic. 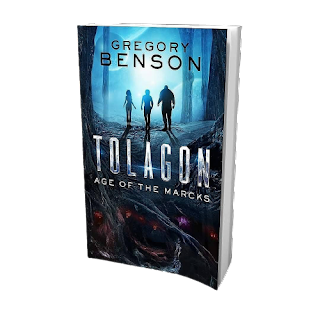 Okay, just to get this out of the way, I received a free copy of the audio book by Gregory Benson. He said "Do you want to listen to this audiobook and write something about it?". So, I said "Okay!"

I must say I enjoyed this audiobook, It has that kind of popcorn feel about it. That is not to say it is a bad book ar anything like that, but it is one of those light books where you breathe, sit back and jsut go with the flow of the story.

The story centres around our hero, Crix.

Crix feels different from those around him, mainly because he is. He is a lone human in an alien environment. He has been raised by his guardian Hafllinger amongst the equine race of Andors, a species of equine inhabitants of the planet Troika.

Not only that, he is a Tolagon, and has an orb inside him that gives him extraordinary powers.

However, evil forces are afoot, and one day as he is out walking he sees an unidentified craft crash land. Now Crix is a bit of a curious lad and decides that he needs to investigate and makes his way over the dangerous terrain to the crash site to investigate and discovers that the pilot, a Mendac girl called Kerriah is alive and well, and that she might need a little bit of help getting out of her crashed spaceship.

He is subsequently thrown headlong into an adventure that will take him further than he has ever been before, running from the might of the evil empire of the Marcks, stumbling on ancient gods, and becoming embroiled in a prison break on a prison planet.

This book was an enjoyable read, especially as we are thrown straight into the adventure, and it keeps the pace at full tilt until the end.

I found that one the things that helped was that I didn't have to think too hard about this book and that I just went from one dangerously life threatening situation to the next without much in between. It has a fun filled action packed plot that drags you along with its flow.

If I thought about it a little bit, there were some small fissures in the gloss of the story, but I thought what the heck. let the story wash over you and just go with it. And with that, all restraints thrown off, I enjoyed this audiobook

The book is narrated by Gabriel Micheals who does a pretty good job of bringing the characters to life and injecting some verve into the story. He has such a good vocal range that gives definition and personality to each character.  I was able to follow th narrative of the story and didn't get lost in the action. So, on the whole, got to say that I quite liked this and will definitely be seeking out the sequel.