Sometime in 2016, dark web posts began appearing about a document known only as “the Manuscript.” Originally created with a manual typewriter and impossible to digitise, the Manuscript can only be read by those who can procure one of its precious few copies. It is said that the Manuscript contains horrific knowledge, and those who have read it have immediately disconnected from the internet, vanished off the digital grid, never to return.
In short order, all online posts regarding the Manuscript were gone without a trace. Everyone with any knowledge or connection to them has disappeared or been gruesomely murdered.
Something horrible is happening. Something unspeakable is coming.
And yet you can't seem to stop from staring at that television, that computer, that mobile phone. THEY have you, and for all your justifications and bravado, you never can turn away.
Why are you still looking?
THEY are watching you… 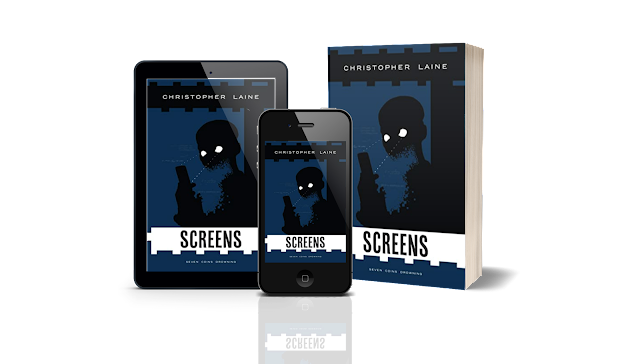 Just to get this out of the way, I was contacted by the author, Christopher Laine, to review this book. He was very nice and gave me a copy of his book and then said write what you want about it, but it would be nice to have a review! So here goes!
Screens is the fourth book in Christopher Laine's The Seven Coins Drowning series, and are intrinsically linked by the theme of the seven deadly sins. There are several stories in the series, but it is not essential to have read the others to enjoy Screens, and I have to say that it did not spoil my enjoyment of the book.
Screens is one of those books where there is so much going on, you don’t know where to start. It took me to places that I didn’t expect, to different realities, dimensions and times. Honestly, I did not know what to expect at all when I started reading this book.
The book tells the story of James, our 404: narrator not found. He is a nobody. A bicycle courier in San Francisco. A casualty of his own ego. A recovering substance user. He is many things, but mainly, he is the teller of our story.
In all honesty, as a narrator, I found him to annoying, gruff and he grated on my nerves at times. He has a propensity to call you, the reader,  Chumley. He is incredibly egotistical, and at times I wanted to punch him! However, what he is not, is uninteresting. Yes, at times he preaches at you, and you throw your hands up in exasperation at him, but ultimately you want to hear his story and how it plays out.
The story of Screens itself, revolves around Frank Belknapp Long’s ‘The Hounds of Tindalos’. For those of you who aren’t aware of F. Belknap Long, he was a contributor to the Cthulhu Mythos and his mate was H. P. Lovecraft. So from that, you know that this book is going to be in the vein of cosmic horror/weird fiction.
When I say that the story revolves around The Hounds of Tindalos (THOT), I mean Christopher Laine basically uses it as a coat stand to hang the coat of his story on. We watch as James the nobody becomes more and more involved with the events of the death surrounding Halpin Chambers (one of the main characters in THOT) and the secrets that he has uncovered.
I have to say that initially, I found this book a little difficult to get into, not because of the structure of the book, but the fact that as a narrator, James makes it particularly hard. It does take a while for the story to hit its full speed.There is a large investigative aspect to the first part of the book.  However, when it did hit its critical speed, Christopher Laine opens the throttle and the book just hurtles along at a phenomenal pace.
Like I said earlier, when it comes to the plot there are a number of things going on. Initially, Christopher Laine cleverly taps into the worldwide paranoia of increased screen time and the effects that it is having on our brains, both biologically and socially and how this impacts on society as a whole, such as increasing the negative ideologies of hatred and making them more commonplace. This is the springboard for the main antagonists of the story to attack the human race.
I found that when I was reading this aspect of the book, it reminded me of the film They Live, in that there is an alien invasion happening under our noses, but yet we, the human race, are not aware of it. And when James dons his proverbial glasses, he cannot unsee the threat that is invisible to everyone else. However, the plot goes into a completely different direction to what you would expect, and it is at this stage the book goes (just to nick a phrase from the book) batshit crazy. However, this is not in a bad way, but in a way that elevates the story that one notch further.
In terms of characters in the book, they are seen through our narrators eyes, and in all honesty, he is quite disingenuous to most of them and you see them through his warped eyes, which makes it difficult to connect with them, except for the one at the end (which I cannot tell you anything about as it would totally ruin the last part of the book. However, on the whole, I felt that the different characters of the book are introduced to move the narrative along rather than as tangible characters that you can latch onto and identify with.
The main character of the book is James. He is the one constant of the story, and you know how I feel about him.
Structurally, Screens is an interesting book. It uses a kind of mixed media approach to tell the story and how it plays out. Sometimes there will be police reports of incidents, or there may be something resembling a confidential dossier of events, or a newspaper report of an incident that has an impact on the story as a whole, whilst having a structured narrative in between these differing forms of media. People may find this a little choppy initially, but you get used to it, and as the story progresses, these other pieces become quite important.
I have to say that by the last third of the book, I was wondering how Christopher Laine would tie up numerous loose ends that he had introduced, but he manages to fit the whole thing together well. Giving the end of the story a satisfying conclusion.
Once I got into Screens, I found it to be a story that grabbed me, dragging me into the horrifying and space warping tale and never letting me go till I had reached the ultimate dimension called the end.