Book Review | The Secret of the Sword by Sean Bell

The Secret of the Sword by Sean R. Bell

Good Morning everyone. On today's review we have a review of a book by new author, Sean R. Bell. Sean approached me a while ago asking me to read his first book called The Sercret of the Sword, the first insalment of his new series called The Grandfather Chronicles.

Let's have a look at the book! 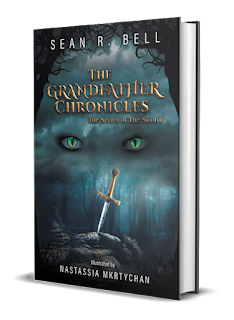 "Long ago when battles were fought with magic and lands were conquered with armies, King Pendragon of Britain led a furious campaign to establish a vast empire over the magical lands now known as Western Europe".

But that was just a legend, a story that was lost as years became decades.

Now, decades later, a Grandfathers past becomes his Grandsons future. The mysterious Pendragon bloodline that was thought to be a myth comes to life in the Grandson Ian Dekker, as he must now navigate the tricky waters of family history and save the world from falling into darkness from his greatest ancestor, Morgana Pendragon.

What would you do if you learned that one of the most evil sorceresses of all time was an ancestor of yours? Family defines the very nature in how we live our lives. We all have memories with our families that have helped shape who we are. The question is, how far would you go for your family if you learned that it was connected to an ancient evil? Canadian Author Sean R. Bell uses his creative imagination and memories with his Grandfather to create a world of fantasy and intrigue in his new fantasy/science fiction book, The Secret of the Sword.

Sean R. Bell’s The Secret of the Sword tells the epic tale of a grandson, Ian Dekker, who discovers through a letter from his deceased Grandfather that he is a descendant of the magical Pendragon bloodline: the family who, in the Middle Ages, established a vast empire in Western Europe, giving rising to legendary figures such as the High King Uther, whose mentor was none other than the great Wizard Merlin. However, as Ian learns, King Uther had a jealous sibling named Morgana, who, after living in her brother’s shadow, turned to darkness in order to gain power and exact her revenge. Merlin and Uther managed to trap Morgana inside the sword Excalibur—but now, centuries later, she is on the brink of escaping her magical prison with the help of loyal followers.

“Keep the sword hidden. The power it possesses is not only too great to wield, but it contains an evil unlike any evil the world has ever seen. The sword will forever be cursed, with the darkness of Morgana bonded to it forever.”

The Secret of the Sword is Sean Bell's first novel, revolving around the myths and legends of King Arthur.

The story revolves around our main protagonist, Ian Dekker, a twenty something living in Canada. Ian is a successful filmmaker, and everything in his life is hunky Dory. Until he gets a summons from his grandfather’s legal representative. This is the day that his life changes, and he becomes involved with secret orders, Morginian Monks & evil sorceresses.

Throughout the book, Ian comes face to face with the secrets that his grandfather has been keeping and the fact that he is a direct descendent of the Pendragons, which I am sure you will be aware included one or two pretty famous kings.

The Secret of the Sword is an old fashioned mystery/adventure full of intrigue and imagination.

The main characters are likeable. Ian Dekker is the archetypal good guy, who is decent to everyone around him, treats everyone with respect, loves his mother and likes Hockey, and he fits into this role really well. The other main character is Kate, Ian’s first romantic crush, and throughout the story it becomes evident  that he still has feelings for her. This is the romantic aspect of the story and Sean Bell writes their relationships well.

However, there is one main character in the book that is ever present throughout the story and that is Ian’s grandfather, who Ian idolised as he spent a large amount of his childhood with him. It is obvious from the story that this relationship is built on Sean Bell’s own relationship with his grandfather

This leads to a frantic race against time, aided by the mysterious Isabella and his childhood friend, Kate, in order to stop the evil Sorceress Morgana regaining her full power and unleashing her evil upon the world. The task of stopping Morgana escaping from her prison will endanger Ian and those around him. Not only that, he will not know who to trust or who is on his side.

The plot is fast paced and Sean Bell uses aspects of Arthurian legend to good effect, incorporating different parts of the mythology and drawing in different characters from the legends to effectively put his own spin on them.

In addition to this, the book is accentuated with some nice artwork by Nastassia Mkrtychan

Sean Bell is a first time writer and is still learning his craft, and at times this is evident in his writing. One of the impressions that I got throughout the book, is that Ian is not left to discover the plot for himself and the device of providing information through his grandfather's journal and  large passages of exposition hampered the narrative. Subsequently,  this gave the distinct impression that there is too much telling and guiding of important plot points rather than showing and letting the story evolve organically. In addition to this, the story is sometimes let down by the prose and dialogue. However, the story did show some positive aspects, particilarly with the use of the Arthurian mythology and I think as Sean R. Bell becomes more adept with his writing, this will improve.

Please note: I received a copy of the book from the author in exchange for an honest review.