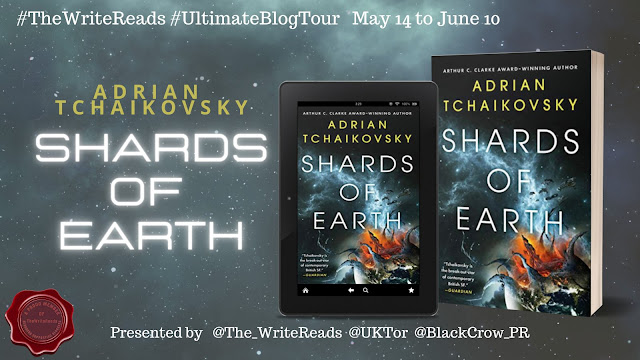 Today my dear Fantasy book nerds I am delighted to be taking part in the #UltimateBlogTour for SHARDS OF EARTH by Adrian Tchaikovsky, organised and presented by the fabulous The Write Reads, along with Tor Books UK & Black Crow.

This is the final day of the tour, and there have been a multitude of fantastic blogs involved in this tour, I hope that you managed to see some of these.

As this is the final day of the tour, you may be familiar with the premise of the book, but if you haven't managed to catch any of the previous reviews or are new to Adrian Tchaikosvky's work, let me tell you what the book is about and give you some information about the book.

The Arthur C. Clarke award-winning author of Children of Time brings us an extraordinary space opera about humanity on the brink of extinction, and how one man's discovery will save or destroy us all.

The war is over. Its heroes forgotten. Until one chance discovery . . .
Idris has neither aged nor slept since they remade him in the war. And one of humanity's heroes now scrapes by on a freelance salvage vessel, to avoid the attention of greater powers.

After earth was destroyed, mankind created a fighting elite to save their species, enhanced humans such as Idris. In the silence of space they could communicate, mind-to-mind, with the enemy. Then their alien aggressors, the Architects, simply disappeared—and Idris and his kind became obsolete.

Now, fifty years later, Idris and his crew have discovered something strange abandoned in space. It's clearly the work of the Architects—but are they returning? And if so, why? Hunted by gangsters, cults and governments, Idris and his crew race across the galaxy hunting for answers. For they now possess something of incalculable value, that many would kill to obtain

Well, here are my thoughts on the book! 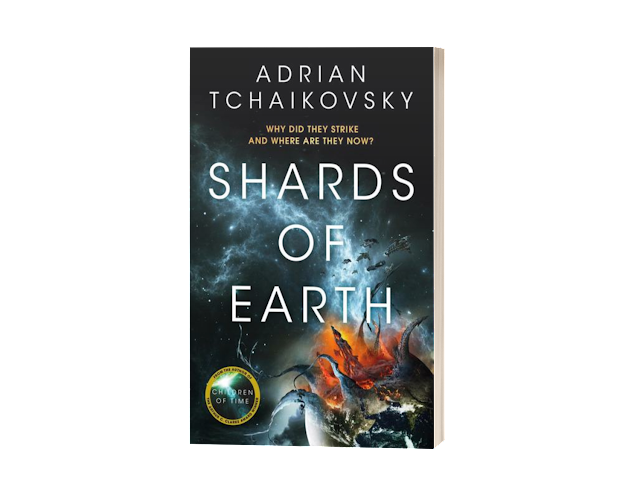 If you have seen the rest of the reviews by the other fabulous bloggers on this tour, you will have probbly seen that the general consensus is that everyone thisks that this is a damn fine book. And do you know what? I ain't veering one little bit from that opinion.

It's a chuffin marvellous book.

You will also seen that for a large number of people, this is their introduction to Adrian Tchaikovsky's work. Well, guess what? Me too!

I have no idea, why it has taken me this long to get Adrian Tchaikovsky's works. Weeeell, I might be telling a little bit of a fib there. I know exactly what the reason is. Everytime, I look at the amount of books that Adrian Tchaikovsky has written, I get a bit of the collywobbles knowing where to start, so when I was kindly invited to join this tour by Dave at The Write Reads to join in this ultimate tour, I thought, this is as good a place as any. Boy, am I glad I did! I love this book. Why did nobody tell me that Adrain Tchaikovsky's writing is so bloody good. In all honesty, I did not know what to expect, but I don't think it was this.

Shards of Earth had me reading at a rate of knots, falling for the engaging characters and laughing out loud at points.

The story takes place after a massive war with a terrilbe enemy called The Architects, a kind of intersteller, planetary redecorators, who visit plantes changing everything in their path, whether the inhabitants of the planet want these molecular and terrestrial improvemts or not.

Obvioulsy, nobody wants this flash mob of malignant home decorators visiting their planet as they don't really have any regard for the inhabitants, governments, armies, or anyone really. They just change everything, from the smallest atom to whole planet refurbishment as they see fit.

This is what happened to Earth, and as a result, the people of earth are now scattered amongst the cosmos.

However, someone, at some point said nope, we are not having it anymore. No one wants their planet redecorating and this pretty indestructable force that goes about vandalising our planets can get the heck out of this universe and go back to where they came from. We might not know where that is, but they can sod right off, back to goodness knows where. And with that, The Architects War started. And whilst no one knew if they could beat them, they had a secret weapon, The Intermediaries. A psychic go between that could tell the Architects "Oy, you! You indescribable horror that goes about vandalsing planets, we have had enough of your hooliganistic ways & we aren't scared of you neither, now please go back from whence you came" (please note: No one says that at any point in the book and I made that bit up! You might say that's a bit of artistic lisence. But, I 'm not an artist, and I haven't got a lisence, so there!). Anyway, back to the book! Eventually, The Architects realise that they are not going to get a nice cup of tea from any of this lot and decide to make like Brave Sir Robin, and run away to whence they came!

So, jumping forward a couple of fifty or so years. Idris, one of The Intermediaries in the Architects War, is a pilot on a salvage ship called The Vulture God, with a load of other people, and crab like things, doing odd salvage jobs around the universe. After, a particularly hard day at work, they get granted a little bit of rest & relaxation by their boss, Rollo. Well, this doesn't go well, as Idris being an intermediary, gets impounded by this pretty high up dignitary, because everyone thinks that Intermediaries are no better than property and can be indentured into any type of service that they see fit, whether they like it or not because intermediaries are leashed (erm, slaves!) and they haven't got a choice in this. Except Idris has coz he's a war hero. He subsequently gets sprung from prison by his mate Kris, and an old mate from his war days, Solace, a genetically modified warrior who belongs to a contingent of female warriors known as Partheni.

The crew of the Vulture God are then hired to tow back another ship from Unspace, which sets off a shed load of events that carry us all the way through the book.

Did I mention, I really liked this book? Yeah? Well, I don't care and I am going to say it again, so there! The book gallops along from planet to planet, adventure to adventure. The characters are endearing and relateable. I know everyone likes Idris and Solace, but my particular favorite was Rollo, the Faginesque captain of the Vulture God. For some reason, he reminded me of a Dickensian character, especially when he refers to everyone as his family etc. I mean I liked all the other characters, but he was the one that I looked forward to seeing when he came into the story.

I also liked the idea of the Unspace and the Architects. At times, it almost felt Lovecraftian when Adrain Tchaikovsy describes them (and the unnameable terrors that lurk in the Unspace). Especially with the concept of the unseen cosmic terror that they (and it) evoke.

As I have said, there is a lot of things going on. There's political, religious and criminal wranglings (all with our crew in the middle, gettig themselves from one puddle of steaming brown stuff to another). In addition to this, Adrian Tchaikovsky populates his universe with diverse lifeforms that are strange and alien. And in addition to this there a crackingly addictive plot.

The other thing that I found to be of note, is that Adrian Tchaikovsky trusts his readers to become immersed in the universe that he has built, giving large pieces of information. However, I found this set up fascinating.

Right. I am going to shut up now, and hope that you enjoyed the review and you want to read the book.

Before I go, here is a little bit about Adrian Tchaikovsky

Adrian Tchaikovsky was born in Woodhall Spa, Lincolnshire before heading off to Reading to study psychology and zoology. For reasons unclear even to himself he subsequently ended up in law and has worked as a legal executive in both Reading and Leeds, where he now lives. Married, he is a keen live role-player and occasional amateur actor, has trained in stage-fighting, and keeps no exotic or dangerous pets of any kind, possibly excepting his son.

Adrian Tchaikovsky is the author of the acclaimed Shadows of the Apt fantasy series, from the first volume, Empire In Black and Gold in 2008 to the final book, Seal of the Worm, in 2014, with a new series and a standalone science fiction novel scheduled for 2015. He has been nominated for the David Gemmell Legend Award and a British Fantasy Society Award. In civilian life he is a lawyer, gamer and amateur entomologist.