Son of the Storm by Suyi Davies Okungbowa

Son of the Storm by Suyi Davies Okungbowa 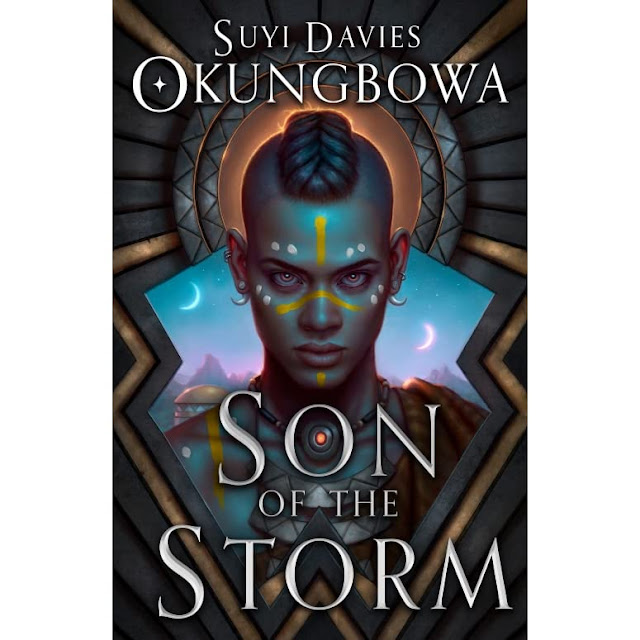 From one of the most exciting new storytellers in epic fantasy, Son of the Storm is a sweeping tale of violent conquest and forgotten magic set in a world inspired by the pre-colonial empires of West Africa.

In the ancient city of Bassa, Danso is a clever scholar on the cusp of achieving greatness—only he doesn’t want it. Instead, he prefers to chase forbidden stories about what lies outside the city walls. The Bassai elite claim there is nothing of interest. The city’s immigrants are sworn to secrecy.

But when Danso stumbles across a warrior wielding magic that shouldn’t exist, he’s put on a collision course with Bassa’s darkest secrets. Drawn into the city’s hidden history, he sets out on a journey beyond its borders. And the chaos left in the wake of his discovery threatens to destroy the empire.

Son of the Storm is the first in a new series by Suyi Davies Okungbowa set in a rich West African based society.

When reviewers read books and subsequently post reviews, we attempt to convey our own interactions with the books. What captured our imagination, our level of engagement with the book and the emotive impact that it had to make us feel the way that we do.

Sometimes a book hits right to the very heart of all these things, and sometimes it misses. I suppose what I am trying to say is that whatever we write, positive or negative, the review is about the reviewer's own opinion, and whilst is not necessarily correct, it is how they feel.

Unfortunately, Son of the Storm did not hit the mark for me. I know a lot of reviewers will say “I really wanted to like this book” and I think that you can guess, that is pretty obvious because that is why I clamoured to review this book, and I am indebted to Netgalley and the publishers Orbit for a chance to review this book

There are a lot of positives in Son of the Storm, such as Suyi Davies Okungbowa’s vibrant voice that is prominent throughout this book. He writes with a distinctive voice that you can immediately grasp the vocal tones that the characters are speaking with.

In addition to that, he has created a world that is full of colour and it was one of the things that struck me with its vivacity.

He also describes a rich socio - political system that is complex and at times quite oppressive in its insular vision.

However, as I have said, I failed to make a connection with this book. It does have a lot of positive points, but I just could not get emotionally invested in the story. I have learnt in my time that sometimes this happens. Sometimes, a book fails to click and attach itself at the basest level. This led me to have difficulty with the book and rather than a growing investiture in the plot, I found myself becoming more and more detached from the book.

There is a multi point of view in relation to characters. Again, this was one of the areas I had problems. I could not relate to the main character of Danso and found myself not caring about what happened to the character in the story.

The breakout character for me was Esheme and her constant striving to increase her status. As a result of this she will do anything. She is a dichotomy of characteristics. On the one hand she is highly passionate about her standing, and on the other she is cold and dispassionate, and in her ambition she finds herself being led down a dark path.

As the story progresses, the character of Lilong is introduced, and similarly as with Danso, I found it hard to connect.

On the whole, I found a Son of Storms a mixed bag. Whilst there were positives, such as the vibrant world, the complex socio - political system and Suyi Davies Okunbowa’s distinctive voice but the book unfortunately did not grab me and narratively whisk me away

As I said at the beginning of this review, as a blogger the main thing that I try to convey is my opinion. There are times that I hope that you will agree with what I write. However, on this occasion, whilst I hope you understand that this is my perspective, I hope that you disagree with everything I say.