the Thunder Heist by Jed Herne

Today I have a review of Jed Herne's 'The Thunder Heist'. This is my forst introduction to Jed Herne's writing and I have to say that when I read the word PIRATES in the descritption, I immediately thought that I would have a go with this.

So, read on and find out what it is all about.

Oh, all the Graphics were provided by Jed Herne! 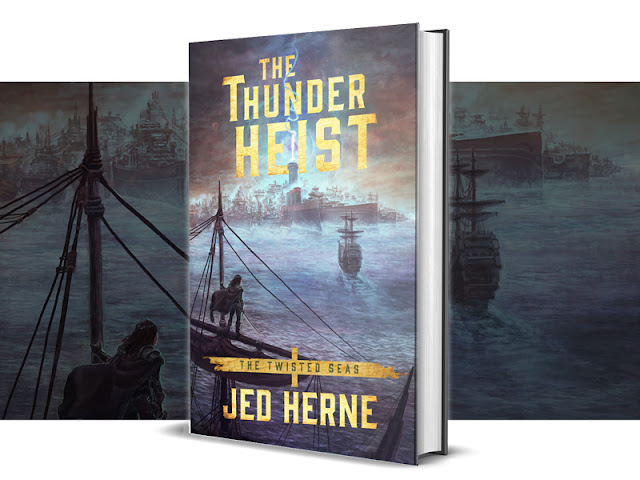 A relentless thief. A magical device. And a heist to change everything.

Kef Cutmark is the greatest pirate in the Twisted Seas. Just ask her – she’s more than happy to talk about her exploits. She’s a woman of sharp wit and an even sharper sword. She’s killed sea monsters, toppled kings, stolen priceless artifacts, and made a hefty sum of gold along the way.

But her charming, roguish exterior hides a dark past. As a child, she was a slave in Zorith – a tangled jungle of a thousand boats, all lashed together to make a floating city-ship. After a life spent running from her past, she’s had enough. Now, it’s time for revenge.

Zorith is powered by a magical device that draws energy from lightning. Mysterious, unique, and locked in an unbreachable tower, it’s the envy of Zorith’s rivals.

And Kef? She’s here to steal it.

To do that, she’ll need a water-breathing mutant, a grumpy architect, and a deaf alchemist. If Kef can take the device, it will cripple Zorith, and serve out justice for what the city did to her. But with all the odds stacked against Kef, failure looks more likely. And if she fails, she’ll never find peace again.

The Thunder Heist is a fast-paced fantasy tale of deception, thievery, and revenge. If you enjoyed The Lies of Locke Lamora, The Gutter Prayer, or Mistborn: The Final Empire, you'll love The Thunder Heist.

What do you get if you mix one part Waterworld, with a touch of Mad Max, a sprinkling of steampunk, a dash of Oceans 11 and a soupcon of Jack Sparrow? You get Jed Herne’s ‘The Thunder Heist’.

The story revolves around pirate with a past, Kef Cutmark, the greatest pirate in the Twisted Seas. Not only is she a Pirate with a past, she’s a pirate with a plan. A very dangerous plan that could topple the city ship of Zorith. The city that held her enslaved as a child, and now she is all grown up, she has put together an elaborate plan that will see the ship and the government sink to the bottom of the twisted seas. Sorry (not sorry) but I make no excuses for my love of pirates. It’s going to get me every time. And add to this a bit of a heist theme set in a world that has mutants and big assed ships and I am in.

There is no doubt about it, Jed Herne’s ‘The Thunder Heist’ is a fun little read. And clocking in at under two hundred pages, the story is a no frills thrill ride right through to the end.

It starts with our titular hero imprisoned on a prison hulk called Blackrake prison, waiting to be executed for her many crimes. However, everything is not as it seems. For one, she put herself there. For two, she fast tracked her own execution, and for three, this is Kef Cutmark. From the explosive first chapter, the pace hurtles along like a person careering down a zip wire and it doesn’t let up. Jed Herne doesn’t bother with any meanderings. He goes from A to B with the minimum of fuss.

However, don’t think that it is a one horse caper novel. There is a whole lot of stuff going on in the book. The Thunder Heist is set in a world with some interesting little quirks. The setting is based around city ships. Great hulking ships that have other ships, pontoons, and other seaworthy vessels all around them. Not only that, this is a land that is populated by mutants. Like Gillers, who are able to swim beneath the polluted sea, Wingers who are able to fly and Crystalcoats, who resemble the stone men in the Gutter Prayer.

The book has fantastic energy and playfulness. However, it is not all fun and frolics. There are some dark edges to the story, that add to the texture of the book.

As it is a short book, and it is a heist book, some of the characters are there for one purpose and don’t really get expanded on, like Gabine for instance, who is the architect of the story. However, like I said, this is a heist story and that normally happens. The main star of the book is Kef Cutmark, and let me tell you she owns the story. She swaggers her way through the plot, and I liked her a lot as a character. Additionally, Jed Herne gives her a little bit of a steely edge that adds to her character and just enough self-doubt to make her seem realistic rather than a nihilistic parody.

So, if you are in the market for a sparky fun read that delivers its punches, you can’t go far wrong with The Thunder Heist. 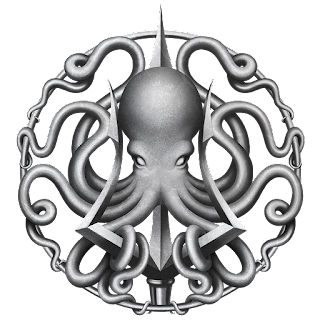