Almost five hundred years have passed since the Seasons were at war.

Half a millennium since Winter defied Spring, and lost.

Generations have come and gone, not knowing the bitter freeze and howling snows of Winter ever existed.

But now, after centuries of silence, the participants in this ancient struggle have resurfaced and reignited their feud on the doorstep of an unassuming little kitchen boy.

Garlan’s dreams of being just like the knights he idolizes may not be as impossible as he has always been led to believe, when he is chased from his home and thrust headlong into the kind of adventure he had only ever read about in books.

Setting out on a journey that spans the entire kingdom of Faeland, Garlan will traverse impossible mountains and stormy seas and battle terrible monsters, all to keep the world he knows safe from an enemy who will stop at nothing to bring about a never-ending winter.

With a cast of fantastical characters to aid him in his quest, can Garlan overcome his self-doubt and find the courage he needs to rise above his humble station and become the hero he always dreamed of being?

The fate of the world rests in his hands. 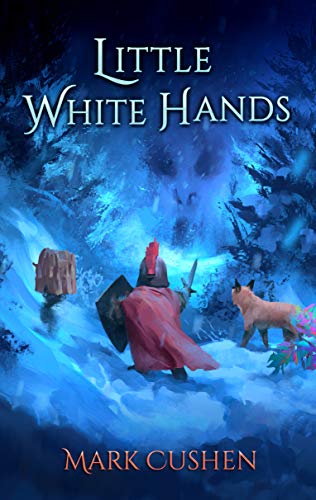 This is the tale of Garlan. The kitchen boy who wants to be a knight.

Mark Cushen weaves an enthralling and enchanting tale of dreaming big. Of working for your dreams and never letting go of your ambitions.

The story revolves around Garlan who is told that an ancient evil is returning to the land, and that the king must know of its return. However, when he speaks to his mentor, he decides that he will undertake a quest to avert disaster, and with his friend, a sentient floating piece of wood called Oldface, they tackle the ancient evil together, taking the news to The four Seasons who live in Dryad Wood. A place out of time and out of the world.

This is a classic tale of the underdog finding ways to make his dreams a reality. However, the tale also describes an individual who has spirit and will try his hardest for those around him.

Filled with a wondrous cast of characters that include faeries, wizards, the four seasons, murderous snowmen, and yetis.

Mark Cushen’s writing is reminiscent of classic faerie tales and it captures your imagination. Never once did the story lull in its adventure. There was always something in the plot that keeps your attention. Always a new situation to keep you entertained. And this is an entertaining book from start to finish.

Sometimes, children’s books can fall into the trap of trying to talk down to children, and never once did this feel like it was talking down to children, trying to impart them with the knowledge that they may need in their future lives. It treats them as individuals who will understand the story and its message. There are some sweet moments in this book. Particularly when Garlan helps a scarecrow deal with the death of his master, telling him about his own losses and how he dealt with the situation

In fact, there are some pretty grown up scenes in this book and one of them wouldn’t be too out of place in a Joe Abercrombie novel in all honesty as it was pretty bloodthirsty.

In addition to this, there are a wonderful cast of characters. Garlan is pure innocence,, he approaches each problem that he faces with pragmatism and determination. In addition, he has a number of advisors that lead him on the right path or are quick to give him the advice that he needs.

Never once does Garlan not listen to advice. He listens to the counsel that others give him and uses it to his advantage, and generally comes out on top.

This book was a delight from start to finish. It was one of those books that lightened my day each time I read it. The prose is full of whimsy and warmth and this book begs to be read in the middle of winter with a cosy glass of something warm.