Weeeell, hello everyone. It's Friday, well at least I hope it is or I am going to look a little silly 😁. This is the second to last stop on the tour for Oathbreaker by A. J. Rettger, I would suspect by now, if you have been following this blog tour, you have become a little familiar with the author. But just in case you haven't here is a little bit about the author of the book. 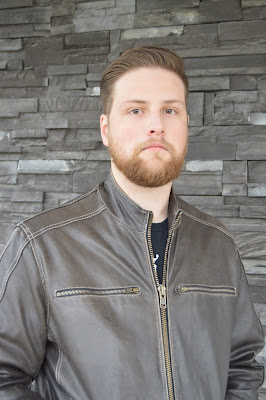 A.J. Rettger lives on a farm near the small town of Aberdeen Saskatchewan with his dog, Zeke. He has a bachelor’s of education degree, as well as a certificate from a private vocational college. His hobbies include playing Dungeons and Dragons, listening to heavy metal, and reading and writing fantasy books. Oathbreaker is his first book.

For thousands of years, elves and non-humans alike had lived freely until humans colonized their land and forced them into hiding and subjugation. After years of living as slaves or second-class citizens, the elves rebelled, but their uprising failed, and humans remained victorious.

Mario Deschamps, a new graduate of the Knight’s College, sets off to complete his first deed, an accomplishment that will grant him knighthood and into the ordo equestris. But he has huge boots to fill. His late father, a famous knight and considered the Scourge of Bandits, single-handedly ended the Elven Uprising. Mario’s youthful confidence, vanity, and naivety don’t get him far in the real world, and he quickly finds himself trapped in a political climate where tensions are on the rise and war is inevitable.

In a world filled with monsters, outlaws, bounty hunters, demons, and murderous bandits, Mario is forced to make tough moral decisions. In a world fuelled by violence, hate, and bigotry, things are not as clear cut as he once thought. Lines have been drawn, but to complete his task, he must cross them all. With every choice, the consequences weigh greatly on him, leaving him full of guilt and doubting his path . . . and all the while, in the darkness, someone-or something-is waiting for him to break . . ..
CW: Violence, gore, sexual assault, rape, coarse language, torture

Misery loves company! Especially in R. J. Rettger's debut novel, Oathbreaker, as it chronicles the tale of newly knighted Mario Deschamps.
When we initially begin the story of Mario, the book does not give any indications of where this book descends and by the end of Mario's story, nothing prepares you for it's culmination.

At the start of the story, Mario is a bright eyed, bushy tailed newly anointed knight. However, as he embarks upon his first quest, events will lead him to become a very different person from the one he envisages and fantasizes about.

In his head, he is going to follow in the footsteps of his esteemed father, Pablo Deschamps. A renowned knight who single handedly quelled the uprising of the elves that populate the world.

However, Mario will be challenged and stripped bare of all the things he believes!
At the start, he firmly believes that the world around him follows a set of rules that fit into his steadfast worldview. However, all this ideals and fantasies of being a courageous knight are brutally stripped from him. There are many trappings of classic fantasy here, such as the Knight on his destrier, non-human races, such as elves, dwarves and halfling. In addition to this, there are monsters, and bandits.

But you will find that most things are turned on their head, particularly with the non - human races. Yes, the elves seem to be typically aloof and haughty. However, the elves are hated and subjugated. They are dehumanised, beaten and treated as something less than human. Additionally, this attitude permeates to the other non human races, and you feel that the hatred towards other races is pernicious and deeply ingrained.
We follow Mario as he embasrks on his first quest. This quest will strip away everything that he holds dear. It will be the hardest thing he has ever done. It will take him on a journey that will change his life forever.

I found the book to be a bleak story, and as Mario and those around him experience tragedy after tragedy, the trauma just piles up. If I could pick a soundtrack for this book, it would be Walk with Me in Hell by Lamb of God, primarily because it is like walking through hell as Mario is stripped and disabused of his innocence one layer at a time, one trauma at a time. If I think back on this, I cannot recall one moment of peace or happiness. Oh, no sorry I lied, one does spring to mind. However, when it does happen there is a foreboding that this is going to not go well.

Now, I hope that I haven’t put you off this book, but there is no shying away from it, this is a dark book. There are no rays of sunshine or knights on white chargers coming to save you.

On the whole, Oathbringer is well written debut. As I said previously, A.J. Retinger has a head full of ideas. Mostly, these ideas work but there were times when some of them didn’t click with me. I found that the intrusion of Mario’s inner thought processes took me way from the narrative, and I felt that these interrupted the flow of the story. That is just my personal opinion, and most people had no problems with this aspect

If you like your fiction dark, then I think you will enjoy this. After the ending of this book, I really want to know what happens next and will be looking forward to the next instalment. 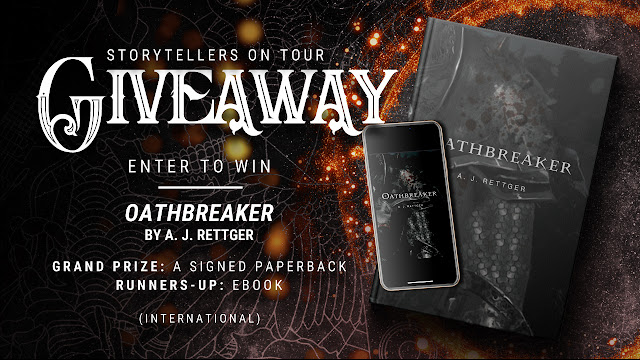 We’re hosting a tour-wide giveaway, and invite you to take part! Below you’ll find the prize info, a Rafflecopter widget embed code, and a direct link. We’ve also added the giveaway in the tour schedule post on our website.
Prize: Oathbreaker by A. J. Rettger – INTERNATIONAL!
GRAND PRIZE: A Signed paperback
RUNNERS-UP: Ebook
Starts: May 9th, 2021 at 12:00am EST
Ends: May 16th, 2021 at 11:59pm EST