A Ritual of Flesh - Lee Conley

A Ritual of Flesh 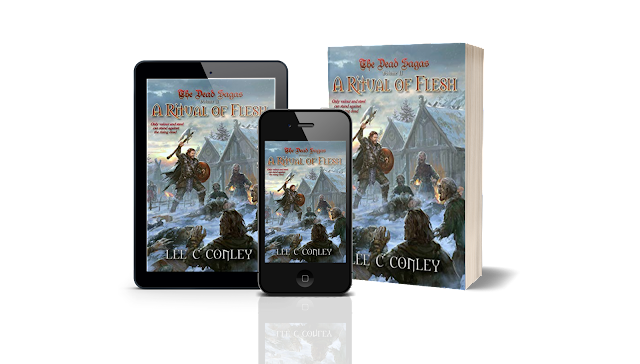 Hello, and welcome to another review. This time it’s a review for Lee Conley’s ‘Ritual of Flesh’. This is the follow up to the first in ‘The Dead Sagas’ The Ritual of Bone, which was one of those surprise books that I enjoyed.

With the schedule the way it is, I thought to myself, the only way that I am going to get to this book this side of the year was to listen to it on audio. And I must say that I enjoyed the audio of the book immensely.

Now, with this book I am going to do things a little differently, and whilst I will be reviewing the book, it’s story, characters etc, I am also going to give a little bit of a spotlight to the narrator as well.

So let’s start with the book!

A Ritual of Flesh

Volume II of The Dead Sagas

As evil ravages the north and the dead walk, all eyes fall to Arn… The apprentice journeys south, home to the College, unaware of the dark events that transpired in the High Passes after his departure. His leg in ruins, and haunted by watching shadows, the College council in Arn awaits him, but he does not travel south alone.

In the capital sickness awaits them all, Nym has fled to the city and must now continue her struggle for survival on the plague ridden streets of Arn, keeping all who she cares for safe from the halls of Old Night.

The many threads of this Saga converge on the city of Arn, but amid plague, invasion and terror, a greater darkness is looming. Dark forces are seeking to unleash evil upon Arnar, honour and renown is all, and sword, axe and shield is all that stands between the living and the grasping hands of the dead.

I have to say that Ritual of Flesh is a more accomplished book than the original. It’s not that I did not like A Ritual of Bone, but from the outset it felt that Lee Conley had found his beat and he is about to produce a 19 minute prog opus that steadily reaches its crescendo.

When I finished the first book, I had questions. Lots of the questions, but the main one revolved around the Apprentice. Who was he? What is he up to? Does he have a plan? What is that Dark force that is hanging around in the background orchestrating events like Palpatine at a political rally?

Well, let me tell you dear reader, these questions get answered. Well, kind of! Look, Lee Conley is an author. He likes to maintain an air of mystery, likes to keep you interested. I mean he needs to get you come back doesn’t he.

Sorry, I went off on a tangent there, didn’t I? Anyway, let’s get back to the point. Yes, Lee Conley does give these answers. However, I am not going to tell you what these answers are. Job done, review over!

The book starts immediately after the first book. Initially, bringing in the quiets tones, that have a slight twang of ominous tension. In the first instance, Lee Conley expertly weaves a number of different events that are happening in the world of Arnur. Much like the first book, we have a multiple point of view, with the Apprentice making his way to the college in order to report the findings of his master’s experiments. Whilst in another part of the land Bjorn is collecting his bounty and also imparting the findings that he found about the cannibals. Meanwhile Lord Arnulf is making his way to the capital, Arn to warn of the impending doom and also back up these claims by taking his son, Ewolf to show him. You remember the one that got bit and turned into a feral killing machine.

Oh, and then there is Nym’s story, which I found to be one of the most engaging character arcs. It shows her daily struggles that she has to contend with. How she is managing on a daily basis, her attempts to keep her wayward brother in check. However, there is a wider picture at work here, in that it highlights the social decline following the pandemic that has struck the land and how brutal this degradation is.

It is also interesting that he gives Ewolf a part in the story. Not only when he is being transported, but as he turns into one of the feral beats that eat human flesh. He manages to convey a sense of intelligence and purpose in the creatures, rather than mindless killing machines.

Throughout the story, there are lots of events happening. However, never once did I feel lost with the sheer amount of story that Lee Conley crams into this book.

I think the most interesting storyline was the one of the Apprentice. Lee Conley details his change from an unassuming student, whose only aim is to gain his position as master, to the place where he gets to by the end of the book, full of confidence and willing to make his own destiny, whatever the cost.

All the way through the first part of the book there is some pretty nifty ominous foreshadowing of events. You get a palpable feeling that something is going to happen

It is in this first part that Lee Conley firmly orchestrates all his instruments into play. Each one adding to the texture of the story, whilst showcasing each individual player in their own right.

All of the characters get time to grow and to play their part in the story. And on top of that he also manages to broaden the world that the characters live in. Besides the Apprentice, there is a full cast of characters, and each one is realised and individual. Even down to the most insignificant guard.

However, all this is a power play to get to the events that you know are coming, and when they do come the pounding beat brings in the pulse banging events. Everything increases tenfold when events take off. It’s like he turns the action up to 11 and there is no stopping till the end. It was at this point that my headphones were permanently glued to my ears until I got to the breath taking end, and my goodness what an end it is.

There is tragedy, loss and horror as the wall of undead make their appearance. And a relative tsunami of horror envelops the city of Arn as each of the characters fight for their lives and sanity in the raging torrent of the cursed.

As it reached it's conclusion, I let out a breath that I knew I was holding and relaxed. However, I must say…… I still have questions!

At its core, Ritual of Flesh has all the tones of a twisted epic fantasy, with regular tropes being played upon. In some respects, you will find the found family element, particularly when events start to take hold, and each of the individual characters are thrust into finding each other.. You will also recognise the unassuming boy finding his destiny in The Apprentice's story. In addition, there are dark forces at play looking to destroy the equilibrium. However, when you add the icing on the cake of 'The Cursed', it takes it into a whole new level.

Now as I told you, I listened to the audiobook of Ritual of Flesh, and I have to say this is one of my favorite audiobooks that I own. RJ Bayley does a fantastic job of bringing the characters to life, giving each one a distinctive voice and character. He magnificently manages to convey the change that the Apprentice undergoes, and he successfully manages to initially show the uncertainty of his character and the weakness that he feels and his transformation by the end of the book

In addition to that, he manages to convey the emotions and nuances of each individual character.

You never get lost in the story and all of the words are audible. I sometimes find that the sound design can get muddled in some audiobooks I have listened to, and on occasion have lost aspects of dialogue. However, with Ritual of Flesh, the production is clear and accessible.

The story is told distinctively in a North of England accent, and I have to say that hats off to RJ Bayley and Lee Conley for the correct pronunciation of water. Now you might question what that means, and I will explain. Normally, water is pronounced with a soft ‘a’, and sounds like ‘warter’. However, in parts of Northern England it is pronounced with a hard ‘a’, like in ‘apple’ and that is how I grew up hearing it pronounced.

As promised, here is a bit of a spotlight on the narrator RJ Bayley

R.J. Bayley is an audiobook narrator and voice over actor. In addition to this he is an experienced sound designer. He has a number of credits to his skills including audiobook narrator, Commercial voice overs, such as working with some well known brands (if you want to know, have a look on his website). He has worked in audio dramas and also as a sound designer on audio dramas.

As well as voice over credits, he is also a radio broadcaster on The RJ Bayley Rock Show on Castle FM and has also worked on Metal Nation

So, there you have it folks. Thank you for reading this review, and I hope you like it.