A Numbers Game by RJ Dark

A NUMBERS GAME by R.J. DARK 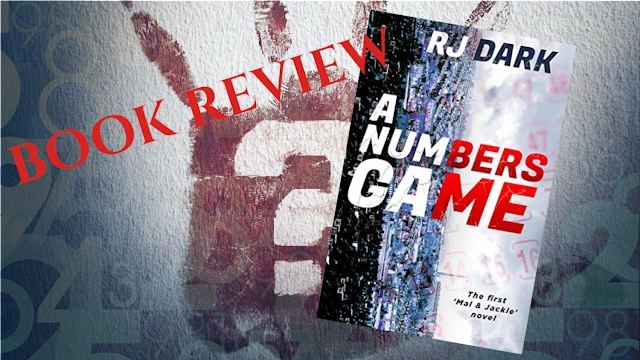 Good Evening everyone. It's review day again, and this time I have gone a little off piste and presenting a crime novel.

What? Eeeerm, you might be thinking to yourselves 'Aren't you called Fantasy Book Nerd, and doesn't it say that you review fantasy, scifi aaand horror?'

Well, yes! But occasionally I like to read something out of these genres. Now, I didn't know if I was actually going to put this on the blog, but I enjoyed it so much I think, yep totally worth it.

I got this one from Netgalley and the Publishers and thank them kindly for the opportunity to read this book. You know that the caveat is that I am supposed to provide an honest review. Well, I lied! I made it all up! So, best get on with it ey?

One dead man and a missing lottery ticket.
Two family members who need that money to get away from the rundown Blades Edge estate.
Three local gangsters who want that money for themselves.

Meet Malachite Jones – the foremost (and only) psychic medium on the gritty Blades Edge estate. All he wants are two things: a name that isn’t ‘Malachite’, and a quiet life. And maybe some real psychic powers, but he’s making a living without them.

Janine Stanbeck wants to find her dead husband Larry’s winning ticket and escape Blades Edge with her son. And she thinks Mal can help her.

But Larry’s dad is the crime lord of the estate, and he wants that ticket for himself, and worse for Mal, he's not the only criminal with his eyes on it. Add in two coppers desperate to nick Mal's best, only, and admittedly quite dangerous, friend, Jackie Singh Kattar, and Blades Edge is getting pretty crowded.

Malachite Jones might not really be able to talk to the dead, but if he and his friend Jackie Singh Kattar can’t find that money and a solution that pleases everyone they’re likely to be in need of a psychic medium themselves.

The first Mal Jones and Jackie Singh Kattar adventure: a chaotic rollercoaster ride through a Yorkshire landscape full of double crossing friends, dogged police, psychotic gangster and voices from the other side.

Shameless meets gritty gangland noir in RJ Dark's story of the criminal underbelly in the Wilds of a Yorkshire council estate.


'A Numbers Game' is the first book in a new Northern Noir series written by RJ Dark, the once underground musician and club promoter, who now spends his life tottering around his ancient mansion.

If you have seen interviews with RJ Dark, you will be familiar with the fact that most his personal reading revolved around crime novels that he got from local second hand shops and that this is the type of fiction that he gravitates towards, and I have to say that I enjoyed his inaugural foray into a fictional Yorkshire gangland immensely. It seems that whatever RJ Dark writes, he spins pure gold.

Now, let's get to 'A Numbers Game'. The story is based around our two main characters, Malachite Jones, or Mal as he prefers to be called, and Jackie Singh Khattar. A borderline sociopath, with a rigid ethical code and a heart of gold at his core.
On top of that, there is a whole host of characters that provide a depth to the story.
There's 'Trolley' Mick Stanbeck. The main gangster of the piece, who whilst being an absolute brutal shit of a man who rules the Blades Edge with an iron rod of fear, he also has a penchance to look after his family.

Alongside Trolley Mick,.there's 'Russian' Frank. The other antagonist of the story who Mal and Jackie come into contact with when they are tasked to find a missing lottery ticket that is worth 8 million pounds and everyone thinks they have a stake in.

As I said earlier, the story revolves around Mal and Jackie. Mal is a medium/conman who communes with the dead. Well, not really, as most of his work is pretty much a community service that he does for various people around the infamous Blades Edge Estate, a council estate in an unnamed town in Yorkshire. Whilst Jackie is a 'legitimate businessman' who works a small time protection racket in the local area.

After the death of Lawrence 'Larry' Stanbeck, Mal is visited by his widow (a job set up by Jackie) to find a missing lottery ticket that could, if you will pardon the pun, be her ticket off the Blades Edge Estate. As the search for the missing lottery ticket ensues, the danger to Mal and Jackie increases as the stakes become higher and higher.

I absolutely adored the mismatched pairing of Mal and Jackie. Mal has a past, and one that he struggles with everyday, whilst for some reason, the local school bully, now medium sized hardman, Jackie looks after him like a mother hen. Always magically turning up whenever he is in trouble.

One of RJ Dark's skills (amongst many) is that he writes utterly compelling characters that you cannot help falling in love with. And 'A Numbers Game' is packed full of them.
As well as the main ones that I talked about earlier there is a plethora of supporting characters that are both comedic and relatable. For instance, there's Mal's assistant, Beryl, who is an overbearing she bitch with mysterious talents, who yet again, looks out for Mal and has his best interests at heart, even though he drinks coffee. And then there's Mick Stanbeck's twins (named 'The Kray Twins, but don't call them that to their face) who only have one brain cell between the both of them and carry a dictionary in their back pocket so that they can 'better' themselves. Like their dad told them they should!

For me, one of the standout aspects of this book is that it is filled with utter warmth towards the characters and to the world that Mal & Jackie live in. Whilst, Dark pokes fun at the council estate mentality and it's inhabitants, there is never any spite towards them. Yes, at times he can make some cutting observations about life on a council estate, yet you always get the impression that he is willing to forgive the characters their faults.

As well as this, the book is full of RJ Dark's unnerring silliness, which at times sails very close to being pythonesque parody, and had me laughing out loud on a number of occasions, but he pulls it back enough to maintain the reality of the situation, and the jeopardy of lead characters situation.

However, don't think that the book is all comedy and innocent tomfoolery, because it's not. It goes to some pretty dark places at times and there is plenty of violence in there. And, the inclusion of this violence serves to increase the sense of danger that face our heroes and gives a palpable feeling of menace to the various gangsters that are present in this book.

As this is a crime thriller, we have to mention the plot. Yep it's twisty and turny and keeps you guessing right to the very end. That's what you expect right! You don't want a plot that goes from A to B in a straight line. You expect that it will take a detour to b,c & d and back again, and in this Dark does not disappoint, but the main point is that the end is believable.and that it ends in a way that does not bring in inexplicable plot revelations.

If you haven't got it yet, I enjoyed this Northern Noir crime caper with its inimatbale sense of fun and warmth, I think it is up there as my favourite RJ Dark (but don't tell that Barker bloke) novel and I cannot wait to see what Mal & Jackie get embroiled in next?

Thank you to Netgalley and the publishers for the chance to review 'A Number's Game'. The enjoyment was all my own! Welcome to the Dark side!
Labels: Book Review