The Shadow of the Gods by John Gwynne

The Shadow of the Gods | John Gwynne 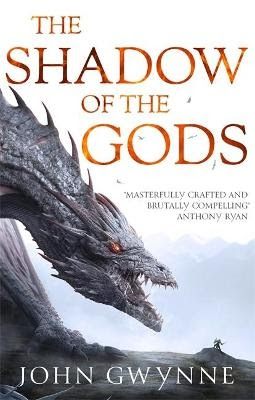 What's the book about then?

Set in a brand-new, Norse-inspired world, and packed with myth, magic and bloody vengeance, The Shadow of the Gods begins an epic new fantasy saga from bestselling author John Gwynne.

After the gods warred and drove themselves to extinction, the cataclysm of their fall shattered the land of Vigrið.

Now a new world is rising, where power-hungry jarls feud and monsters stalk the woods and mountains. A world where the bones of the dead gods still hold great power for those brave - or desperate - enough to seek them out.

Now, as whispers of war echo across the mountains and fjords, fate follows in the footsteps of three people: a huntress on a dangerous quest, a noblewoman who has rejected privilege in pursuit of battle fame, and a thrall who seeks vengeance among the famed mercenaries known as the Bloodsworn.

All three will shape the fate of the world as it once more falls under the shadow of the gods . . .

Let's get this out there before we start, this is my first John Gwynne book. I have been meaning to read his books for quite some time, but unfortunately, commitments usually got in the way and delayed me from starting his books.

When people usually mention John Gwynne, there is always an undertone of reverence whenever his stories are mentioned, so I was eager to read this book, and this seemed the perfect time to become acquainted with John Gwynne's works.

The story is the start of a new storyline that is not based in the same world as his previous books and is set in a Viking world, full of battle-hardened warriors, Jarls and monsters (If there's something that is going to get my attention, it is definitely monsters!).

The Shadow of the Gods revolves around three main characters; Varg, Orka and Elvar. Each with their own separate storylines, running side by side. Each one showing different aspects of the world of Virgid.

With Varg, we follow him as he joins the warband the Bloodsworn (the very same Bloodsworn on the front cover that this saga is all about!). We share his experiences as he initially joins the war band and then his adventures as he travels the land of Virgid.

Independently, of this, there is Elvar's story. Elvar is a member of another warband, the Battle Grim. Elvar's thread opens up the world further, showing us another perspective of the world that the characters reside in. Elvar's story does take time to gain momentum. However, when it does, her part in this saga is gigantic (In fact, my jaw literally dropped and I found myself going Whooooa, like a big kid. Gordon Bennett, I wish I could tell you more, but you need to read it and I don't want to spoil it).

And finally, we have Orka! Upon reading many of the reviews and comments about The Shadow of the Gods, Orka's story is the one that has had the most resonance with readers, and when you read the book, you can see why. Orka is such a brilliant character, she has both warmth and depth, and is a proper badass! She is a woman fueled by vengeance And she will stop at nothing to enact it, she's like a force of nature.

One of the many strengths of this book is the rich and complex characters that populate The Shadow of the Gods. However, besides the main protagonists of the story, there is a dearth of individuals who make up the supporting cast. Each one of these adds to the texture of the book. Characters like Svik, who delights us each time he is on the page, especially when he waxes lyrical about his love of cheese. Which had me in peals of laughter.

This book worked on so many levels. Gwynne's world-building is so gorgeously crafted and immersive. In 'The Shadow of the Gods', John Gwynne throws the reader into an expansive world made up of monsters and cities built on the skeletons of God's. It is a brutal world, 'a world of tooth and claw, where life is battle',

However, not only that, but John Gwynne keeps you enthralled even in the quiet moments. For instance, when Svik tells the story of a time he was captured by a troll and engaged him in an eating contest. I was as engrossed at this story as much as the Bloodsworn sat at the campfire.

It's amazing how he interjects the furious battle scenes with moments of humour and comradeship, that grip you just as much as the massive, bloody fight scenes.

Let's talk about the battle scenes! Oh my goodness, John Gwynne writes some of the most blood-pumping battle scenes that I have ever read. When he writes a battle scene, you can almost hear the clash of steel reverberating around you, smell the perspiration of warriors next to you and feel the jolt of metal as sword hits shield.

I constantly marvelled at John Gwynne's masterful storytelling, I found myself unable to lift my head from the page. It's books like this that show the wealth, depth and scope of stories written in the fantasy genre and keep me begging for more.

With his new book The Shadow of the Gods, John Gwynne shows us that the pen is indeed mightier than the seax, as he swathes his way to the top of everyone's to be read list in this must-read fantasy book of the year.