The Dark Crown by S.C. Gowland 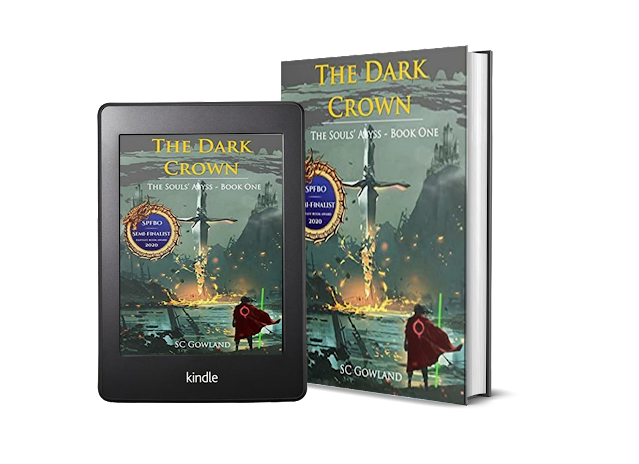 Information about the Book

THE WORLD IS AT WAR, BUT HE WON'T LOSE HIS SOUL.

A land in turmoil. An unknown enemy. A family torn apart.

Kaoldan is tired of trying to keep the peace as the world tries to tear itself apart. But his life is about to change.

As Kaoldan fights to unravel his own dark past, the return of his daughters throws him into another unfamiliar role; how to be a father again.

Battles will be fought, lives will be lost, but if Kaoldan can save souls, there is always hope.

There's a story behind this book. Originally, S. C. Gowland got in touch asking if I would like to read the second book in his series The Soul's Abyss, Coven of Shadows (released 13th April, and will be reviewed next on the site). Now, I must confess that I had not read the first one and asked 'do I need to have read the first one?' - I know, I know, you are saying 'Duh, of course you do!'. However, S.C. Gowland very kindly wrote me a synopsis of this book. However, as I had the second one to review, I thought nope, I will have a look at The Dark Crown becasue I want to get a feeling for S. C. Gowland's writing. Well, I was immediately hooked and simply could not stop.

The Dark Crown was a semi - finalist in the Self - Published Fantasy Blog Off 2020 competition and it is easy to see why.

Now, if there is one thing that is going to grab my attention, it is going to be animal companions and when I started reading The Dark Crown, the first thing that struck me was the use of giant cats, called Pantheras that are  used as mounts, instead of horses. I immediately felt my interest rising further, as we are introduced to our lead protagonist Kaoldan as he escorts a group of refugees from an unknown war with a people called the Krund. As this first chapter progresses, other details jumped from the page that hooked me into the story.

As the refugees continue on their way they are attacked by the forces of the Krund, which results in Kaoldan defending the refugees (and this is where again my attention was grabbed)  he reaches for his weapon. This was something called a 'Walkerblade' which is a metal rod that tranforms into whatever weapon the bearer wants.

Okay, call me a bit shallow, but animals and weapons are going to draw me in. Can't help it! But I am a fantasy fan, so what do you expect!

However, the story can't be held with animals and transforming weapons alone and as the story progressed, I felt myself becoming more and more sucked in, and I wanted to spend time in this world and see what happens.

Well, I have to say that I ended up adoring this book and devoured it in a couple of days. I simply wanted to depart from the real world and becomge engrossed in the story of Kaoldan, Zalen, Khubrean and the world of the Walkers.

The Dark Crown is very definitely epic fantasy, you know fate of the world, evil threatening the stability of everything around it etc. However, the story has some very compact themes in it and as you spend more time immersed in The Dark Crown, these smaller themes come more to the fore and the epic scale falls into the background.

The story revolves around Kaoldan, who is a Walker. An order of warriors (that resemble knights) that protect the peope and also maintian order. We learn that Kaoldan is a Red Walker and that the order is split into differing levels based on colours. Green Walkers are the lowest, Red Walkers are the most experienced warriors, Grey Walkers are the commanders and the Black Walkers are the absolute pinnacle of the order.

Kaoldan is an experienced Red Walker. However, he has experienced tragedy in his life, which has resulted in his family breaking down. His family are subsequently split and his daughters are enrolled to be Walkers, so that it takes their mind from the tragedy they have endured, and Kaoldan has immersed himslef in his role in order to not deal with what happened.

As you can imagine, this is going to come up and cause conflict at some point, and it does! And this interplay between Kaoldan and his daughters adds to the texture of the book, along with all the other stuff that is going on.

One of the main drivers in The Dark Crown, is that it is filled with engaging characters that you want to spend time with, you want to learn more about them and live in their world, sharing their experiences. In addition to that, there is an immersive plot that involves travelling to hidden cities, obtaining an object of power and fighting enemies, both known and unlnown.

There are lots of things to admire in The Dark Crown. Such as the world building. S.C. Gowland builds an environment that is varied and detailed that is very definitely part of the story. There are times when there is a lot of travelling involved as the protagonists search out information about the threat that is coming from the Krund, but I enjoyed this aspect and it gave me an opportunity to visit other parts of the land.

Add to this an ensemble cast that all make the story richer. There is Nova and Tokel, effectively, Kaoldan's grandparents who basically raised him when he was training to be a Walker. There is Khubrean, his mentor and Zalen, his best friend throughout his life as a Walker, who is both flippant and deep all at the same time.

It struck me that there are many of the tropes used that fantasy fans will recognise, but the thing with tropes is, that if they are done well, it adds to the book rather than detracts from the story, S. C. Gowland does use tropes that I am sure is going to hit to heart of every fantasy fan. Such things as animal companions with the Panthera, which rather than being just animals that the Walkers ride, all have their own character, and Dref the Schnauzer, who becomes just as much a part of the party as the humans. There is the found family aspect, which never fails to get me. And then there is the interplay between the characters.

When Kaoldan's daughters, Zahana and Romina are introduced, they change the dynamic a little as it brings to the fore all of the feelings that Kaoldan has kept hidden and as they are reintriduced to each other again, you cannot help but empathise with both parties at the raw emotions that they have when they get back together. One of the things that I like is that as a protagonist, Kaoldan is not perfect. He has made mistakes and wrong decisions. But you can understand them, even if you don't agree with them.

And where would any fantasy book be without a magic system. I liked S.C. Gowlands magic system, which he calls Fajin, which kind of resembles the force. Again, it is effective and adds to the richness of the story.

In conclusion, if you like your fantasy epic, but with more compact themes of family, grief and loss then this is the book for you.