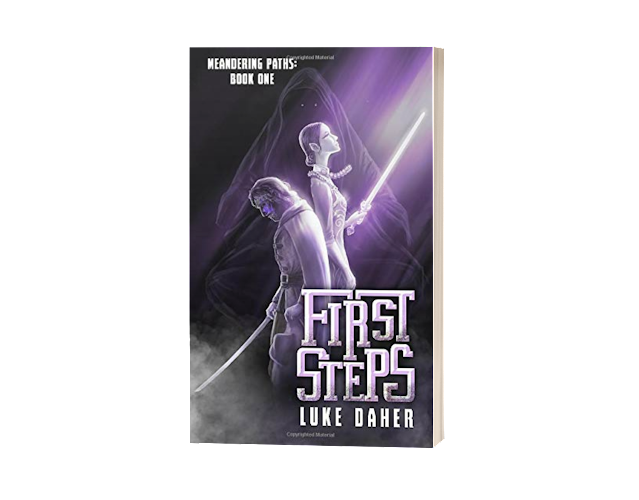 Not all roads lead to desired destinations...

A swordsman struggles beneath the burdens of lost friends, survival in the lawless Wilds and a fate he wishes to outrun.

An artist stands on the fringes of her society, derided by her peers while striving to impress the Divine her people worship.

Around them, an uncaring world shifts, leading their feet onto greater paths unknowingly. Willing or unwilling, they each face journeys fraught with danger as a darkness encroaches. But do either know where they want to go?

First off, I need to say thank you to Luke Daher for contacting me to review his book. As you can guess I did receive a copy, and obviously I said I would love to read it, but I will be giving an honest review. He said ‘fair enuff!’ So there you have it.

Now, down to brass tacks, what did I think?

I have to admit that I knew nothing about this book at all. I didn’t read the blurb before diving in, so didn’t really know what to expect.

I like to do this, you have no preconceived ideas and whatever happens is a surprise, and let me tell you that this was a surprise.

The story revolves around master swordsman Normyn Stormcoat. However, when we meet him he is just plain, simple Normyn, a boy from Catchcreek, a backwater village in The Wilds. He's a boy that is able command respect despite his young age,but is quite self conscious about a facial blemish that marks him out as being different.

The other main character is Xylia, a self assured artist from the Kyrese society. A member of the blessed who is constantly pushing against what she sees as the constraints of the society she lives in. She is always striving to be more, to be the best, and above all others.

There are a number of things to mention in this, Luke Daher’s first outing. Firstly, his world building is vivid, and at times oppressive, particularly when we are in the wilds, which is painted as an arid, desolate environment. However, when we switch to Kyrel, the picture is the exact opposite. This is a city of beauty, plenty and the pursuit of perfection, but there is an undercurrent of nastiness. And when we change each point of view, we see the contrasts of each environment.

However, it is not just in the physical landscapes that we see these contrasts but also in the landscape of each of the characters' psyche. Normyn is equally as desolate as the landscape that he lives in, whilst Xyria similarly reflects her landscape in her pursuit of perfection.

In addition to the vivid world building, Luke Daher presents us with intriguing and engaging characters that you want to spend time with. However, they are not particularly likeable. Normyn, for instance, is a man that is plagued with mental health problems, but he does make it difficult to have any sympathy for him. He has gone through some significant trauma, and whilst he is a man of great power, he is plagued by guilt and has subsequently given up on life. He has given up caring and has become withdrawn from everything. He does not want to become involved with anything and will let himself be beaten and imprisoned rather than interact. He is a reluctant hero and tries his damned hardest not to become a part of anything.

Conversely whilst Xylia does have some degree of likeability, even though is she self serving, arrogant and blinded to anything but her own desire to be the absolute pinnacle of what she perceives is perfection. And this is one of those things that Daher does very cleverly. He instils a sense of certain paths for each character, but the series is called Meandering Paths for a reason, and characters reach their destination from different directions

However, the characters are strong and intriguing, which is good as for the first half of the book we spend a long time living with these characters, learning about them, breathing with them, and as you can imagine to pull this with off with a degree of success, you have to be able to write characters that are able to carry the story.

As well as these two, we have others that enter the story. Ley, a precocious, unruly boy who is imprisoned with Normyn, who in all actuality takes Normyn under his wing and sticks by him, irregardless of the fact that Normyn is unable to care for anyone. We later get Tabita, an insular Highlander that just tags along and becomes part of the group.

Well, when it comes to the check boxes, we have world building covered, we have characters covered. What else do we need? Ahh, that’s it - the magic. Yes, there is magic aplenty in First Steps. And what Luke Daher has done is to successfully make it part of each individual character, each power different depending on who wields it, collectively known as different names depending on which part of the world that you come from, in some ‘the blessed’ and in others ‘the powerful’

The pacing is not immediately explosive, it takes time to build. However, if you are used to such books as the Wheel of Time, I don’t think that you will have any trouble with this book

As a debut, this is a solid, entertaining debut that is certain to appeal to fans of epic fantasy and that I think needs some more exposure as I thoroughly enjoyed this book.

At its heart, First Steps is epic fantasy, and Luke Daher presents us with the tropes that you expect to see in epic fantasy - the good vs evil, the chosen one, enchanted swords etc. However, Luke Daher uses these effectively and subverts them to present an engaging fantasy that by the end leaves you wanting more.