Blog Challenge: I’m a sucker for…… 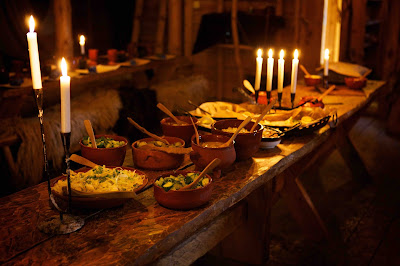 Thank you to Cassidee from FanFiAddict.com for the tag to take part in this little challenge that was created by Alex from spellsandspaceships.com. All you have to do is write a short post about an element, trope, or a device that you are partial to while reading, tag five people and hope that they participate and keep the fun going.

Now, I have to say that I thought long and hard about this, wracking my brain for the thing that draws me into a story. I thought about morally grey characters, monsters, magic swords etc. But the thing that I kept coming back to is that little thought about trope, but is so intrinsic to any piece of literature; food.

If you think about food, it is one of the essential aspects to any literature. Since the early myths  we have always wanted to know what food everybody eats in our stories, from the most sumptuous feast, like those described in Harry Potter, to the lowliest gruel that will simply sustain you, such as in Oliver Twist.

Food is an essential part of the world building, and in any fantasy book it can give you the familiarity in even the most alien of worlds. It can tell us more about a character than any description of clothing. For instance, if a character has a sweet tooth and likes to eat rich and expensive foods, we get the impression that they are frivolous. However, if the character has no taste for these things, but like plain unadorned foods, we get the impression that the character is down to earth.

It can anchor us as a point of reference, or it can jar us out of a setting. By this I mean, if you are reading a fantasy book that is based in a Viking Culture, you would not expect them to be eating noodles, pasta or vegetables that come from a warmer climate. And you would expect some pretty good explanations for that as it does not sit right in our brain.

Whilst, most people would think that food is unassuming, it has to be done well. It is one of the most difficult things to describe. Try it! Stop for a moment and think about how you would describe the sensation of eating an apple. How it tastes, how it feels. Think of some of the more complex flavours. What about spices? What does cinnamon taste like? How does it add complexity to the food that you are eating? Even the most simplest of food is hard to give a clear impression of, bread for instance. It is the combination of water, flour and a raising agent that changes its constitution with the application of heat. Not a particularly inspiring description is it? However, describe it as brown bread, or strong black bread and everyone can picture it.

Throughout literature, fantasy literature in particular,  food has been used as a major dramatic device. It can give the reader a sense of fun, it can be sensual and sometimes it can be quite shocking. Food is one of the times that we are at our most vulnerable. Would the ‘Red Wedding’ Scene in A Song of Ice & Fire be as shocking if the massacre took place on a battlefield? Probably not! I think that the most shocking aspect of that part of the book is due to the fact that a truce is called, everyone’s attention is on the food and the characters are at their most vulnerable and all this is violated, making it one of the most distressing scenes in literature.

Conversely, it has provided me with some of the most happiest times in a book. The Feast in the Hobbit, when all the dwarfs visit and they decide that Bilbo is the burglar, the spiced potatoes in Dragonlance (which I desperately want to eat!). These things have always drawn me in and provide the books that I read with depth and richness.

Food in fantasy can tell us so much and it is that aspect of fiction that I am always drawn to. It can be the most simplest aspect of a story, but equally it can be the most complex part of a book and I think that this is the thing I am a sucker for.