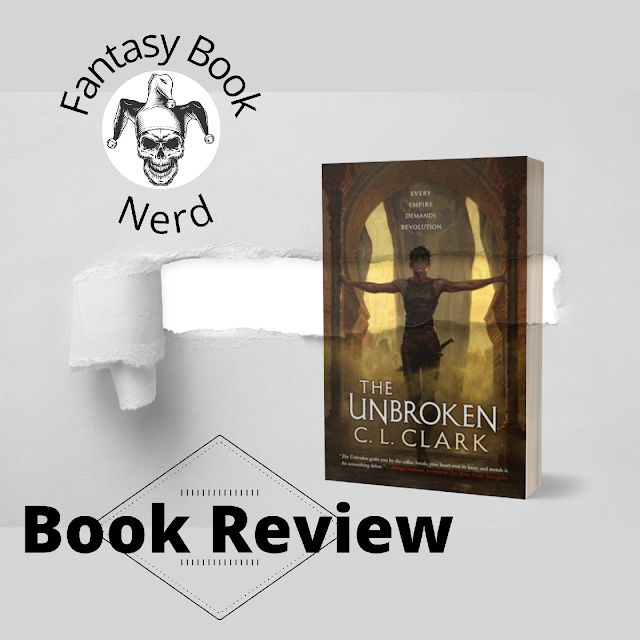 Title: The Unbroken
Author: C. L. Clark
Series: Magic of the Lost #1
Publisher: Orbit
Pub. Date: 25th March 2021
Print Length: 528 pages
Synopsis
Touraine is a soldier. Stolen as a child and raised to kill and die for the empire, her only loyalty is to her fellow conscripts. But now, her company has been sent back to her homeland to stop a rebellion, and the ties of blood may be stronger than she thought.
Luca needs a turncoat. Someone desperate enough to tiptoe the bayonet's edge between treason and orders. Someone who can sway the rebels toward peace, while Luca focuses on what really matters: getting her uncle off her throne.
Through assassinations and massacres, in bedrooms and war rooms, Touraine and Luca will haggle over the price of a nation. But some things aren't for sale.
Review
Love, Revolution and colonialism.
So I have literally just finished reading The Unbroken, and I have to say my thoughts are mixed on this one. There is quite a lot to like about this book, and these things outweigh some of my reservations about the book.
As with many books by an author that I am unfamiliar with, my interest was piqued by the gorgeous cover art by Tommy Arnold. I love the way that the cover captures the desert setting of the book and the inner strength of Touraine pushing against both sides of the conflict that she is placed in the middle of.
The story takes place in Qazal. A country that is viciously governed by the expanding empire of Balladaire.
It’s main characters are Touraine, a conscripted member of Balladaire's armed forces, stolen as a child to be used as a frontline soldier in the ‘Sands’ regiment of the army. The children are ‘educated’ from an early age, with their belief systems and personalities modified to believe that they are fighting their former home for the greater good.
The other is Luca, the young monarch of Ballardaire who is sent to Qazal in order to quell the rebellion and prove her ability to rule Balladaire to her uncle, who is currently the regent and does not want to relinquish the power of the throne.
The Unbroken is quite an interesting read. It is based in a North African setting with the Balladairans resembling the French empire of the late 19th Century. Now, I found this to be quite an original premise and not one that I had seen in a fantasy book before. Clark does an amazing job of building an extensive and believable world that lies outside a normal fantasy setting. She catches the vibrancy of the country that she is describing, even though the country of Qazal is a suppressed country. She also captures the cruelties of the ruling classes and the poverty of the people. She regularly highlights the disparity of the situation, showing the nihilistic attitudes of the nobility on the one hand, with lavish balls and the like, and the abject poverty of the people that are being oppressed.
Additionally, she shows the dehumanisation of the Sands (the regiment of the army that is made up of the conscripted nationals) and theQazali people, regularly peppering the book with descriptions of the casual cruelty that is metered out to  both the everyday people that live there and also to the ‘Sands’.
The basis of the plot revolves around Luca’s obsession with her obtaining her rightful place as leader of the Balladairan throne.However, Luca wants to step away from the normally brutal methods that have not worked and actually wants to negotiate with the rebels. In order to initiate this plan she needs an intermediary to go between both parties.
This is where Touraine comes in.
At the very beginning of the book, Touraine foils an assassination attempt on the Princess’s life. Thus gaining her some favour with the princess who grants her a boon for her valour. When Touraine is disgraced in an incident later in the book,she calls in the Boon and the princess sees her chance to set her plans in motion by employing Touraine as her personal emissary.
What ensues is a story of two  individuals that come from vastly different backgrounds learning about each other and the feelings that grow between the two, as well as learning about different cultures and wrangling with the political machinations of both the Empire and the rebels.
Like I said there is a lot to like about this book. The setting, the romance between Luca and Touraine, the political wranglings and the effervescent plot that takes you in lots of different directions.
However, I did find it a little hard to get into at first, and I found it difficult to relate to the characters initially. The pacing at the beginning of the book revolves around a lot of plot building. And at times, I found that this hampered the pacing for me, thus adding to my difficulty in relating to the story.
However, when we get to the second half of the book, the pacing picks up and I have to say it leads to a pretty climactic conclusion that had me turning pages at a rate of knots as I wanted to find out how the book will end.
On the whole, I enjoyed the book despite my initial difficulties with the pacing and I eventually related to the characters.
I have a feeling that C. L Clark will be a fantasy writer to keep an eye on, and will go from strength to strength.
Labels: Book Review