Book Tour | Legacy of the Brightwash by       Krystle Matar 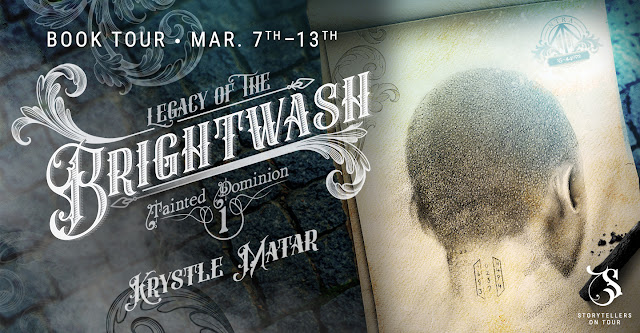 It's my turn on the Blog Tour for Legacy of the Brightwash by Krystle Matar. The tour has been organised by the fabulous Storytellers on Tour. So far there have been some fantastic bloggers involved in this tour and I hope you can check out their reviews too. 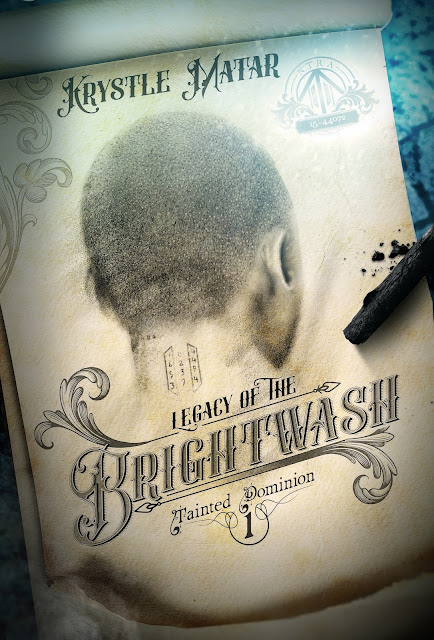 Now before we get to the review, I just want to mention that the cover art for the book is done by Brad Bergman who has done a fantastic job of capturing the tone of the book, both the industrial aspects of a victorian era and the fantastcal elements of magic. Added to that, the typography fits the whole aesthetic, adding that finishing component.

Follow the law and you’ll stay safe. But what if the law is wrong?

Tashué’s faith in the law is beginning to crack.

Three years ago, he stood by when the Authority condemned Jason to the brutality of the Rift for non-compliance. When Tashué’s son refused to register as tainted, the laws had to be upheld. He’d never doubted his job as a Regulation Officer before, but three years of watching your son wither away can break down even the strongest convictions.

Then a dead girl washed up on the bank of the Brightwash, tattooed and mutilated. Where had she come from? Who would tattoo a child? Was it the same person who killed her?

Why was he the only one who cared?

Review
Krystle Matar's debut has been garnering much attention in the book community of late, with everyone raving about how good this book is. So, when you come to a book that has had so much positive attention, there is a little trepidation, hoping that as a reviewer, you are going to find the same positive aspects of the book

However, after finishing the book, I can see why there have been so many positive reviews of 'The Legacy of the Brightwash'. It is an exceptional debut that brings something that I have not seen previously to the fantasy genre, and I have to say that Krystle Matar has done something that I didn’t quite expect. She surprised me! Now, let me tell you, I have been reading fantasy since I was a teen, so without giving my age away, that is a pretty long time, and one of the downfalls of reading fantasy for an extensive amount of time is that you tend to see the echoes of other authors or the influence of such and such. However, I didn't get this with Legacy of the Brightwash.

Legacy of the Brightwash is a mixture of crime novel and fantasy set in the Victorian City of Yaelsmuir, that seemed to me to be a mixture of Victorian London, but also brought to my mind a Canadian frontiership.

I like this world that Kyrstle Matar has built in the book. I like it a lot! It’s harsh and unforgiving, but additionally Krystle Matar has built it with such precision that she knows every blade of grass in the world. On the one hand she will show the disparity between the opulent ruling classes and then switch to the hand to mouth environment of the poor of the city. It is such a well constructed environment. So well constructed that you can smell the spices of the sausages in the market that Tashue and Stella eat when they visit the market place in the book, to the sweat and blood of the fighting pits.

And that brings me to the characters. As you can guess, the two main characters are Tahsue and Stella. However, there is a full supporting cast in the book and at times we follow their point of view, like Ishmael or Tashue’s son, Jason, but the main points of view revolve around Tashue and Stella. I have to say that Krystle Matar does not waste a single character in the book. Each individual is fully fleshed out and seems like a real person. In all honesty, all the characters were so well crafted that they simply walked off the page and took up residence in my imagination.

The plot of the book is excellent. Like I said,it’s a mixture of crime drama and fantasy, and to be honest this works immensely well. The story starts with the washed up body of a dismembered child on the banks of the Brightwash of the story. It seems that dead bodies washing up on the banks of the river are not particularly uncommon and the girl is treated the same as the regular flotsam and jetson that is generally washed up. Initially, there is a crowd watching the proceedings, but you get the feeling that no - one actually cares, even the local constabulary, that is until Captain Tashue Blackwood of the National Tainted Registration Authority takes charge of the investigation, even though it is not his job, against the advice of his lieutenant, Kazrani.

This leads him to investigate the death of this young girl, and he becomes involved in an investigation that could lead him to the higher echelons of the Dominion, the cruel and oppressive government of Yaelsmuir.

On top of that, Tashue is railroaded into the political machinations of local politician in his run for mayor which leads him to become involved with femme fatal Illea Winter, who along with Tahue’s former military commander, Nathaniel Wolfe believes that Tashue’s exemplary mitlatry background would help bolster the career of Illea’s husband.

You get the feeling that when we start the book, that whilst Tashue is an individual that can take care of himself, he is a bit of a bystander in his own life. He seems to go where the situation leads him, but he has no real convictions. He seems a bit lost, and it is not until he becomes involved with Stella that he actually starts to come to life.

Phew, that’s enough for one book isn’t it. But not for Krystle Matar, because she introduces one of the most interesting aspects of the book that really intrigued me.

Obviously, this is fantasy, and any good fantasy needs some magic. And Krystle Matar does something quite interesting with the magic. Whilst at this precise time, the magic system is not particularly intricate. However, the Dominion uses the magic of the tainted (the magic users of the book) as the literal battery of the Dominion Empire, powering engines and vehicles etc. People who use magic are seen as subhuman and if they do not register as magic users are thrown into jail, much like Tashue’s son Jason. In addition to this, they are forced into breeding programs or if they are free, they are monitored to make sure they are following the rules that are assigned by the Dominion. Throughout the story, people with magic are treated awfully, and the vile attitudes of the Dominion are so pervasive they seep into the foundations of the city. I mean, there are obvious real world connotations in this aspect of the story. However, Krystle Matar handles this with care and sensitivity, without failing to highlight the brutality and the hypocrisy of these attitudes.

Now my final point to make, is the romance. Yes, there is romance in the book, and it can get quite steamy at times. Let me tell, generally, when it comes to romance, I will generally run the other way. However, I didn’t mind this aspect of the story and it adds to the depth of the characters.

I think you can guess I like this book, I like this book a helluva lot and it is definitely up there as one of my favorite books of the year. I simply cannot believe that this book is a debut, as Krystle Matar’s writing is so accomplished it is ridiculous. There is such a depth to her prose! Goodness knows what she is going to do next but I will be jostling my way through the multitude of admirers to get to the front and get my copy. 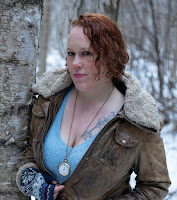 Krystle Matar has been writing for a long time, but things got serious when Tashué Blackwood walked into her life, an amber-eyed whirlwind.

When she isn’t arguing with him or any of his friends, she parents and farms. She has a lot of children and even more animals and one very excellent husband.

She is currently working on lots of stories set in the Dominion. She expects to exist in this universe for a while. 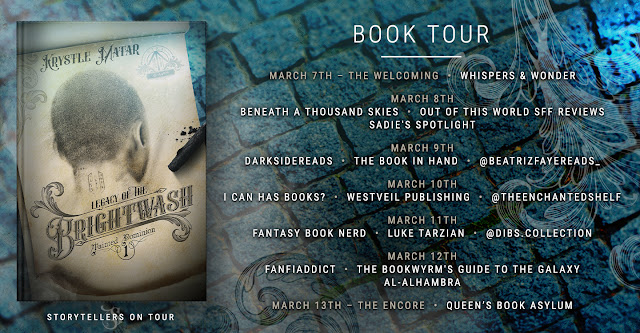