The Kingdom of Liars by Nick Martell 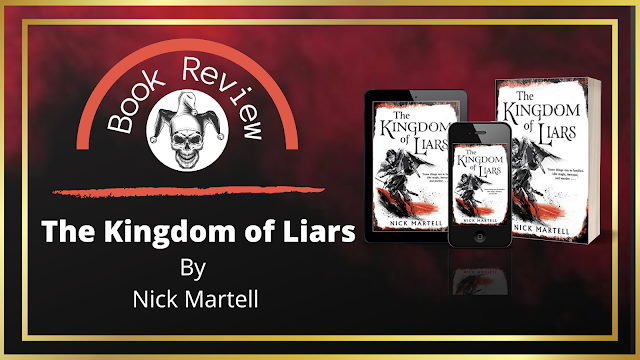 Michael was branded a traitor and his family exiled from courtly life after his father, David Kingman, murdered the king's nine-year-old son.

Now he survives by conning, cheating and duelling minor royals in a weak attempt to strike back at the world that abandoned him and his family, sure all the while that his father must be innocent . . . and aware that some powerful secret lurks in the hot white emptiness of his mind.

So when the opportunity arrives to return to court, via the most dangerous of the King's royal council, Michael takes it, hoping for clues to unlock his hidden past. Instead, he's going to find a royal family spiralling into a self-serving dictatorship, as beyond the walls gun-wielding rebels clash against magically trained militia.

But if he can find his way to the truth, he could completely reverse the injustices which rule the Hollows . . . if Michael and his family can survive long enough to see it . . .

You will hear this story as I lived it.
Count yourself lucky to hear a Kingman tell their story. There has been no other account like this. And all I ask from you, in return for the greatest story ever told, is a small favor and to let me live long enough to tell it.

When we first meet Michael, he is introduced as a traitor who has killed the king but once the book starts proper, we learn through flashbacks about the events that lead him to this conclusion. We learn that he has been getting by as a conman, performing mock duels with petty nobles as they come into the city for the Endless Waltz. A kind of debutante ball in which the nobles aim to make alliances and marriages as they jostle for power and favour.

As we move through the story, it transpires that Michael is the son of David Kingsman, a high noble, who whilst in position as the right hand of the King, murdered the King's young son, the next in line to the throne and was subsequently executed as a traitor. In addition to this, all his family have been branded as traitors and forced to live a life far removed from the trappings of their once privileged position.

Michael’s family is one of the most prominent families in the history of Hollow, even to the point that they actually helped build the city that Michael and his family live in and that there has been a Kingsman keeping the royal family and high nobles in check throughout the history of Hollow, until that fateful day when his father killed the king's son. Now they are exiled from court, their crumbling home and society in general. Branded as traitors and forced to live the life they do.

In the present, Michael and his family live a hand to mouth existence. Michael ekes out a living as a con man and thief in order to pay for his mother's care as she was placed in an asylum following the death of his father and her memory has been affected. His sister is a nurse at the asylum his mother is kept in, and his other two brothers are in the employ of the crown. One as the crown executioner and the other a soldier.

However, as the book progresses, he takes a job as the carer for the mysterious Charles Dommet. A functioning alcoholic and one of the most powerful men in the country, who is soon to be released from the same asylum that his mother resides in. Michael undertakes the job following an incident in which the rebels who are currently at the doors of the city of Hollow, storm the city and murder his best friends younger brother. However, the reasons for him taking the job are purely selfish and he hopes that he is able to be taught about fabrication, the magic system of the book.

Whilst he is in the employ of Charles Dommet, he is made an offer that he cannot refuse. To seek out the mystery surrounding the events that led to his father killing the King's son and to hopefully clear both his father’s name and that of his family. However, not only is he the pawn of Charles Dommet. He becomes the pawn of Naomi, an ambitious Scale (a kind of soldier), who enlists his help to further her standing and position with the Corrupt Prince.

There is so much going on in this book. We have political intrigue, rebellion against the ruling class and the mystery of finding the truth about Michael’s father.

I have to say that I really enjoyed this book. The pacing is fast and punchy, especially the mystery element, and the characters are intriguing.

However, I have to say that I found Michael to be one of the most annoying characters ever. He is selfish and whilst he extols that he cares for nothing except his family he is always putting them second place to his own scheme and obsessions. He makes bad decision after bad decision, which usually results in something impacting on those around him. However, I found him to be quite endearing in his own way. Whilst he is brattish and selfish, he does actually care about those around him.

In addition to this, the supportive characters are all strong in their own ways. I especially liked the self serving Charles Dommet, who I would love to find out more about.

There were a number of things that I found really interesting in this book. For instance, I found the magic system (where magic users are called fabricators) to be quite intriguing, even though at times it did remind me of the X-Men. I think Nick Martell must have taken Sanderson’s laws on magic systems to heart as he has ingrained the magic system into every part of the ecology of the book, and he makes it believable and immersive as the magic system is easy to understand and it has limitations and effects, particularly when we learn that the use of magic has an effect on the user. In that if you use it too much it will steal memories which could result in the user becoming a ‘forgotten’ or one who has lost too many of their memories to function.

The story centres around the city of Hollow, and rarely moves out of the confines of its walls, although other places are mentioned. This means that the world building is generally made up of the various different places in this vast city. However, Nick Martell does a brilliant job of evoking the various different parts of the city. I found the world building to be quite interesting. Hollow is a city that is on the verge of technological advancement and this is the first fantasy that I have read that has guns in it (mainly flintlocks) and I really liked this idea Nick Martell uses them in a really inventive way and uses the as a central aspect of the story, highlighting the social differences between the ruling class and the lower classes.

The other thing that I liked was the moon of Celona. One of the twin moons that has broken apart and hangs above the city, shattered and disintegrating.

Now, I don’t usually compare books or authors to others authors etc. However, I do think that both readers of Patrick Rothfuss and Brandon Sanderson will get something out of this book, it does have a similar energy to these books

If you haven’t read The Kingdom of Liars, grab a copy and catch before the second one comes out next month.