The Haunting of Tram Car 015 by P. Djeli Clark 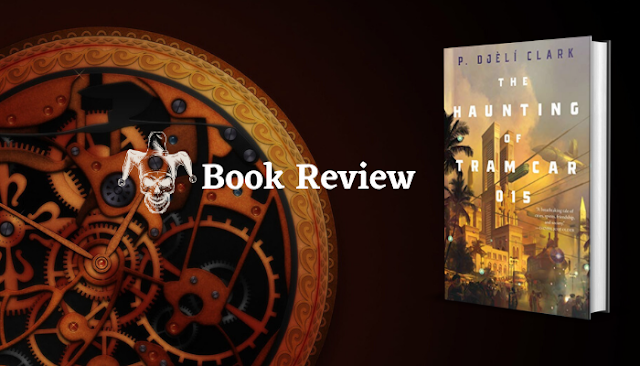 Some Facts about the book

I simply cannot wait to read The Master of Djinn by P. Djeli Clark, but in the meantime I have been whetting my appetite with some short stories set in his wonderfully evocative alternative Cairo.

His first short story 'Dead Djinn in Cairo' was my first foray into this world and introduced me to Fatma el Shar'awari, the English suited, bowler hatted member of the Egyptian Ministry of Alchemy, Enchantments, and Supernatural Entities.

This second story introduces some new characters and more adventures of the Egyptian Ministry of Alchemical Enchantments, and Supernatural Entities, with two different characters, Agents Hamed Nasr and Onsi. Although there are cameos from Agent Fatma and the dazzlingly charming Siti from the previous story.

The story revolves around a seemingly straightforward clean up job of a haunted tram. The tram 015 of the title!

When Agents Nazr and Onsi are asked to investigate a mysterious occurrence on one of the trams by the sweet loving, obsequious Superintendent Bashir,they do not realise how complicated the task will be.Superintendent Bashir reports that the tram car is haunted by the spirit of something that masquerades as a woman. They have subsequently removed the said tram car from service due to this disturbing phenomena as it is affecting the passengers.

What follows is an enjoyable romp as Agents Nasr and Onsi come face to face with malevolent creatures from Armenian legend, suffragettes and magic that the ministry doesn't entirely trust. And added to this, Agent Nazr also has the job of assessing his fellow agents competency to becoming a fully fledged member of the ministry.

Suffice it to say, I adore these stories. P. Djeli Clark is such a talented writer that he is able to transport you right into the middle of the action without so much as a by your leave. You immediately have an affinity with the characters as they move from one situation to the next and he doesn't spend resources filling their time on the page with backstory and motivations, they are just there. His world building is amazing, he is able to establish a tangible and realistic world in which you can almost smell the scent of coffee and spices. The plot and the pacing move as fast as an out of control tram car as he deftly carries you through the story.

One of the most alluring aspects of this 19th century alternative version of Cairo is change from old world traditions to the modernity of new technologies and this is explored by the focus of trams powered by Djinn magic and boiler plate eunuchs. Clark explores how these impact on the wider world and the inhabitants of this sprawling metropolis.

Whilst Fatma el Shar'awari makes a cameo in this story (and I have to say that in the previous story, I simply fell in love her character), it's a testament to Clark's writing that he can introduce two new characters into an established world and they can carry the weight of the story in just the same way.

If you haven't read any of these stories, I urge you to do so. They are a fantastic introduction to the world in which the Master of Djinn will be based in.