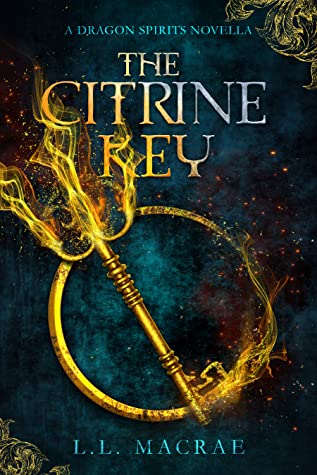 Some Facts about the book

Life-long thief Apollo Tamlin has been marked for execution. When the mage Queen Surayo offers him a pardon, he doesn’t ask questions - any task she has is better than a walk to the gallows.

Succeed, and not only will it preserve peace in his homeland, but Apollo can rebuild the life he’s ruined.

Sent to a distant continent to feed a stolen artefact to an ancient and powerful dragon spirit sounds simple, but things quickly start going wrong. His companions are not what they seem, the dragon would rather eat him, and the artefact displays its own magic - throwing the entire mission into peril.

This is a novella by L.L. Macrae and is the precursor to The Dragon Spirits series.

The story is about life long thief Apollo Tamlin, who given the choice between execution or a pardon where he could escape his life of crime by organising  a journey that could end in certain death, decides on the second .

When  a robbery has gone wrong in the Royal palace, Tamlin is forced to take a stolen artifact to be destroyed by the Spirit of the Eternal Blizzard by the Conqueror Queen, Suraya.

In order to complete the task he and his party, comprising of his friend Malora and cell mate Yorik.

The Citrine Key is a thrilling little story that involves dragons, mystery and long forgotten terrors.

L.L. Macrae does an excellent job of plunging you headling in to the story from the begining, doing a pretty decent job of introducing the characters and building the world immdiately so that you feel familiar with the environment and the characters.

The thing that I like about novellas in that there is no room for procrastination due to their compactness and this story works well in the confines of this format.

The characters are all solid, with enough backstory to flesh out their character without being bogged down with unnecessary exposition. I particularly found the lead character Apollo to be an interesting character that I would definitely like to see more of. He uses humour to hide his emations but he is extremely loyal to his friend Malora.

Similarly, Malora has some history. She is a spirit blessed whose power has deserted her and has fallen on hard times.

There is definitely an epic fantasy feel to the story, and I like that the characters are not your usual heroic chosen types but are flawed and have some depth to them.

One of the things that is always going to get my attention are dragons, and I really like how L.L. Macrae uses them. Each one is identified as a spirit. In this story we meet the Spirit of the Eternal Blizzard, who is an ice dragon, but we also get hints of other dragons too, such as the Spirit of Iron that belongs to the conqueror queen.

As an introduction to L. L. Marae's writing  I found that this was a satisfying and enjoyable read and I will definitely be investigating the main story when it comes out, which is set five years after this story.