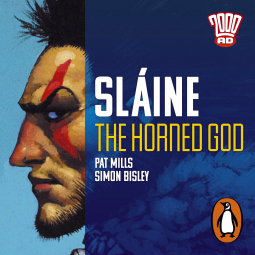 Description
For too long the people of Tír na nÓg have suffered under the dominion of the drunes; strange druids who have poisoned the land with their magic. Sláine has had enough of their tyranny and, through the Earth Goddess, he learns some shocking truths about the priesthood and his own future.
Now Sláine must unite the four kings of Tir-Nan-Og and use their mystical weapons as he and the Sessair tribe prepare for all-out war!
Featuring Colin Morgan, Gerry O'Brien, Ayoola Smart, Gemma Whelan, Stephen Hogan and a full cast, fans of Sláine and newcomers to the famed barbarian's world will be transported to a world of Celtic mythology and fantasy for an immersive listening experience like no other.
© 1986 Rebellion 2000 AD Ltd (P) Penguin Audio and Rebellion Publishing 2021
Review
Pat Mills & Simon Bisley's anarchic tale of Slaine the Horned God is brought to life by Colin Morgan,Gerry O'Brien, Gemma Whelan Ayoola Smart and a whole host of others in this latest release by Penguin Audio.
Slaine is a barbarian fantasy adventure based on Celtic Mythology and stories which made its debut in 1983.
In the original stories, Slaine was banished from his tribe, the Sessair,and as a result he spends early years exploring the land of the young (Tir Na Nog) with his companion, the dwarf Ukko and his trusty axe, Brainbiter. He is also possessed with the power to warp spasm, where he joins with the earth and transforms into a misshapen killing machine. On his travels, he rescues the maiden Medb from being sacrificed to Crom Cruach, the giant Maggot. Although, this didn't go according to plan and she actually becomes his enemy instead and ends up joining forces with decomposing Lord Weird Slough Fegg to destroy Slaine
This is one of Slaine's most memorable outings as he returns to the tribes that ousted him when he was younger. He has now become the horned God, the lover, brother and son of Danu, the earth Goddess.
As he takes up his reign as the horned God he is determined to reunite the tribes of Ireland and bring back the ancient ways, when women were the rulers and men were the followers of a female deity.
However, as he tries to complete this plan he has to obtain the forbidden weapons, a spear, a sword, a cauldron and the navel of the goddess, whilst trying to thwart the plans of Medb, reconcile with his former lover, Niamh and win the favour of the capricious Danu and fight a titanic battle with the god of death, the Lord Weird Slough Fegg and his band of sea devils, the Formorians. Not an easy task!
Penguin audio have done a fantastic job of capturing the spirit of this comic. The story is told through flashback by the dwarf Ukko who is tasked to write the saga of Slaine.
Gerry O'Brien does a hilariously comedic performance as Ukko, as he constantly drinks mead, extols the physical virtues of Niamh and describes with zeal the bloody gusto of Slaine's performance on the battle field. At various parts in the story whilst he his recounting Elaine's exploits, Niamh interrupts him and there is some really funny dialogue between the two.
However, this is just one aspect of the story. Colin Morgan's performance as Slaine is excellent, as is Gemma Whelan as Medb and Ayoola Smart as Niamh. Additionally, all the actors capture the sardonic wit of the comic admirably.
I read this comic years ago, and it has always been one of my favourites, so to hear this audio drama doing such a solid job of bringing Slaine to life was a delight. The action is very well paced and you get a good sense of what is happening throughout the story.
On top of that, the sound design adds to the mood of the piece. We get swords clashing and cauldrons bubbling. It all adds to the experience, giving the audio depth and realism.
I have to say, I take my hat off to Penguin and the whole team that made this for bringing Slaine back into my life!
Kiss my axe!
About the authors
Pat Mills
Pat Mills is regarded as the godfather of British comics, and is known for setting up Battle and Action comics in the 1970's. However, he is best known for long running comic 2000AD.
When John Wagner left 2000AD, he took over Judge Dredd and is credited for establishing the character and the world before John Wagner returned.
Amongst other creations, he is known for ABC warriors, Nemesis the Warlock, American Reaper (which has been bought by Amblin) and Requiem.
Simon Bisley
Simon Bisley started his career doing album and magazine covers. He is known for working on ABC warriors, Slaine and Lobo, although he has worked on Batman (with Neil Gaiman), X - men, Hellblazer and a whole host of others. He has won many awards including the Eisner for best artist for 'Judgement on Gotham'
Labels: Book Review