Where to start with Terry Pratchett

For all those people that have not read Terry Pratchett, why not? You will love it, although I do realise that his books are not for everyone. 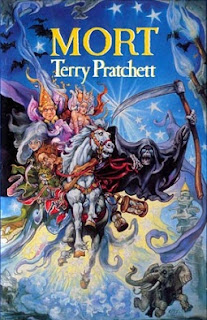 I started reading Terry Pratchett in 1987 when I first picked up Mort from the library. I found it hilarious. It was something that was completely different  and fresh. This was the fourth book at the time, so I did not have to go too far back when I wanted to read his back catalogue. I think at the time, there were only three other Discworld novels and also his earlier works, Dark Side of the Sun (1976) and Strata (1981) and there was also a children’s book called ‘The Carpet People’ which had been published in 1971.

After that, Terry Pratcchett books became a staple of my book buying and also most likely my life as I also have a pretty decent collection of the old Clarecraft figures which were produced in the 90’s. In fact, I actually met him on a few occasions and got books signed by him (up until earlier this week, they were the only books that I ever had that were signed). He was generally a lovely, affable man when I met him, and I have to say at the time I did not know how popular he would become. It was a great loss to both fantasy fiction and British Literature when he died aged 66 in 2015.

Now going back to my earlier statement of why haven’t you read Terry Pratchett? Well it is quite easy really isn’t it. I think on the whole he wrote about 70 books, not all of those were set in the Discworld, but there is a large majority of them set there. I think he wrote about 41 in total. And there were the other books that he wrote that connected in there, like The Science of the Discworld (which he wrote four books with Ian Stewart and Jack Cohen) and also The Folklore of the Discworld (written with Jacqueline Simpson). So, when it comes to starting these books it must seem pretty daunting! *See Below

A Bit about The Discworld

Let’s give some background to what the Discworld is!

The Discworld is a flat planet that lies on the backs of four elephants (Berelia, Tubul, Great T’Phon and Jerekeen) who all stand on the back of the Giant Star Turtle, Great A’ Tuin.

(Now this might seem a little bit out there,  but it does bear a striking resemblance to Hindu Cosmology in which the tortoise Chukwa supports eight elephants, four named male elephant, Viroopaakshaa (east), Mahaapadma (south), Saumanasa (West) and Bhadra (north) and four unnamed female elephants)**See Below

Now, the first book in the series was The Colour of Magic, which was published in 1983 and this introduced us to Rincewind (apprentice wizzard because it says so on his hat!), Twoflower and the Luggage (a magical luggage trunk that has a hundreds of tiny legs, a voracious appetite and a really bad temper!).

The other character that everyone remembers is Death (who really likes cats and has a daughter called Ysabell. Oh, and a horse called Binky).

“What is there in this world that truly makes living worthwhile?”
Death thought about it.
CATS, he said eventually. CATS ARE NICE.” - SOURCERY by Terry Pratchett

The  other characters of note are Captain Sam Vimes, and my personal favourites the three Witches (Esme (Granny) Weatherwax, Gytha (Nanny) Ogg and Margrat Garlick).

For the first time in her life Granny wondered whether there might be something important in all these books people were setting such store by these days, although she was opposed to books on strict moral grounds, since she had heard that many of them were written by dead people and therefore it stood to reason reading them would be as bad as necromancy. - From Equal Rites by Terry Pratchett 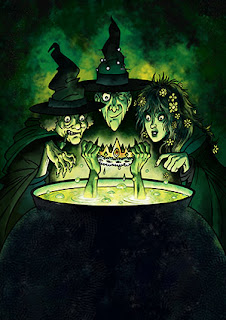 However, there are a multitude of characters throughout all his books (my personal favourite is Cut-me - own – throat Dibbler) ***

One of the things that I love about Pratchett is that whilst set in a fantasy world, they are generally a parody of the non sensical aspects of our own world and they centre around such things as film making (Moving Pictures), newspaper publishing (The Truth), religion (Small Gods), music industry (Soul Music) and all sorts of other things.

So, the question is where do I start with this series?

Well for one you could go in publication order and start from the very beginning with The Colour of Magic and work your way through them like that. ****

Or maybe you could cut it into tiny digestible pieces and read it by character. Like read all the Death books (I think there are 5), The Witches books (6), The City Watch (The largest amount of books clocking in at 8), Moist von Lipwig (3) Rincewind/The Wizards (7) and the Tiffany Aching Books (5)*****

You could dip your toe in and read some of the standalones, or gateway books like Mort, Small Gods, or Moving Pictures

Or maybe you want to do it your own way and just do whatever. They are all fine, these are suggestions.

However, there are a load of sites out there but a couple that I like are:

www.terrypratchett.com and www.discworldemporium.com (which is also a shoppe, so beware! There are loads of oooh too many tempting things on there)

So, if you want to start reading Terry Pratchett, I hope you find this useful.

*I am only doing the Discworld in this post, I might be here all night if I have to write about the rest of his books. I have a job you know! And a nerd needs to sleep, you know!

**If any of those facts are wrong, I take no responsibility for any of it. It was the internet and we all know what that is like!

*** And there is a multitude of supporting characters

**** That’s the way that I read them, coz I had to wait for the next instalment (patiently, very patiently!)