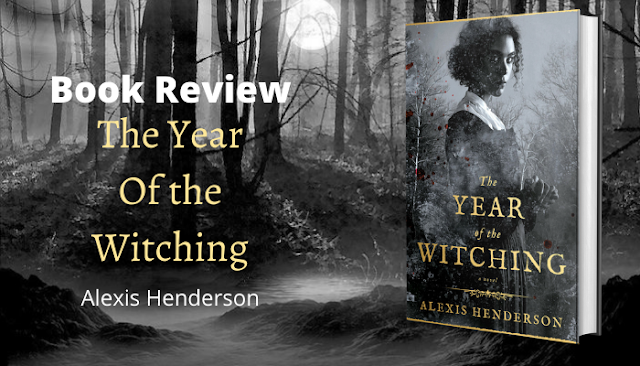 Here's some little bits of information

Title: The Year of the Witching

I have seen mixed reviews for Alexis Henderson’s novel, The Year of the Witching, but for me I have to say from the outset that I loved it. I found Alexis Henderson’ story to be beguiling and evocative, and it seriously clicked with me.

The tale starts with the birth of our Protagonist, Immanuelle who lives in the town of Bethel. Bethel is a place that is governed by a strict puritanical religion and watched over by the Prophet, who maintains his power with the aid of his apostles.

The prologue immediately conjures a feeling of disquiet and we know that Immanuelle has a destiny, one that will unfold as she grows.

The story then jumps seventeen years to show us Immanuelle, kneeling prostrate at an altar awaiting the blessing of the father in the form of blood from the sacrificial lamb.

As Henderson tells the tale of Immanuelle, we quickly learn that Bethel is not a particularly nice place to live and that Immanuelle is considered to be somewhat of a pariah. Her mother, whilst betrothed to be one of the many wives of the Prophet, had a clandestine affair with a man from the outskirts. This does not go well, as Miriam is cast out and the poor man suffers an even worse fate.

This is a strange world in which the religion resembles a Christian religion, with the main deity being the Father, and that the opposing force is The Mother. Who we later learn is called The Dark Mother, not just because she resides in the darkness!

The town of Bethel is surrounded by The Dark Wood. The cursed home of the Dark Mother and her coven of witches. All are forbidden from entering the Dark Wood and all those who enter are immediately suspected of being witches. However, one day. On return from the market in which she must sell her ram in order to alleviate the harsh winter that her family have experienced. Immanuelle is drawn into the dark wood. And there, she is given the journal of her dead mother. The secrets that are held within will change everything. Both for Immanuelle and for all of Bethel.

This is quite a hard review to write in all honesty. It’s difficult to convey how much I enjoyed this book and not give away plot spoilers, but for you I’ll try.

I have seen many reviews likening this to The Handmaid's Tale, and it does bear a resemblance in that there is oppression both in the form of a Patriarchal religion and the oppression of women. I have also seen it mentioned that this is a horror. However, I found it to be more of a dark fantasy rather than horror.

One of things that really impressed me about the book was Alexis Henderson’s masterful ability to maintain a cloying sense of disquiet throughout the story. Whether it be from the supernatural elements, the oppressiveness of the religion, the duplicitous prophet or even from Immanuelle’s own family. Everything seemed to be off kilter and distorted in some way.

The book is populated by complex, well rounded characters. Immanuelle herself is a superb character that we see grow as the story progresses. In addition to that the other standout characters are her Grandmother Martha, the matriarch of the family, who is both harsh and loving of her granddaughter. The loathsome Prophet, Grant Chambers, whose puritanical and insidious influence spreads throughout all of the town of Bethel and he rules with a rod of iron and fear, unwilling to relinquish even the slightest bit of power. And then there is his son and heir, Ezra Chambers, who sees his father for what he is and wants to change the system.

Added to that, there are the Witches, Lillith and her coven whose influence seeps from the dark wood. She is used as a totem of fear and oppression to keep the women of Bethel in line. However, there is more to the story of Lillith who was banished to the dark wood by the first prophet David Ford, and we see that she is a multi-faceted character that whilst being an object of fear, this is not exactly the truth.

The book is peppered with a number of different prejudices. Not only are prejudices based on gender, but there is also colour of skin and class, and we learn that these views have a grip in all parts of the society. Immanuelle for instance, is of mixed heritage, culture and race. And she is not accepted by either those in the town of Bethel or the folk in The Outskirts.

Additionally, Alexis Henderson does a fantastic job of building the world around her characters, mapping out a well thought out world, complex political and religious systems. As we move through the book, she cleverly expands the story to encompass other parts of the world. The Dark Wood is malignant and foreboding, the Outskirts where the poor and the dispossessed, and those who are not white of skin reside. It then moves out to the towns around Bethel and gives us more of an insight of what lies beyond the gates

I found The Year of The Witching to be an engrossing and utterly compelling book. It has some very dark themes, but I did find the ultimate theme was one of change and emancipation. Not just from the shackles of oppression, but from the past and tradition and Alexis Henderson masterfully crafts subtle creeping atmosphere into the essence of the story and I for one loved it.

Oh, and just to mention that I actually listened to this story on audiobook which was fantastically narrated by Brianna Coleman.