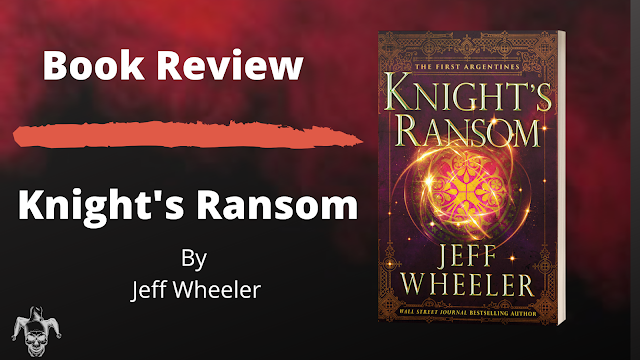 Uneasy lies the head that wears a crown. A brutal war of succession has plunged the court of Kingfountain into a power struggle between a charitable king who took the crown unlawfully and his ambitious rival, Devon Argentine. The balance of power between the two men hinges on the fate of a young boy ensnared in this courtly intrigue. A boy befittingly nicknamed Ransom.
When the Argentine family finally rules, Ransom must make his own way in the world. Opportunities open and shut before him as he journeys along the path to knighthood, blind to a shadowy conspiracy of jealousy and revenge. Securing his place will not be easy, nor will winning the affection of Lady Claire de Murrow, a fiery young heiress from an unpredictably mad kingdom.Ransom interrupts an abduction plot targeting the Queen of Ceredigion and earns a position in service to her son, the firstborn of the new Argentine dynasty. But conflict and treachery threaten the family, and Ransom must also come to understand and hone his burgeoning powers—abilities that involve more than his mastery with a blade and that make him as much a target as his lord.
Jeff Wheeler crafts a masterful tale of war, succession and intrigue in his latest book, Knight's Ransom.
Review
The story follows the tale of Marshall Barton, a hostage of King Gervase of Kingfountain. In a bid to bring Marshall’s father to heel, King Gervase is advised that in order to make him toe the line is to kill his child. However, things don’t go according to plan. Firstly, Marshall’s father refuses to acknowledge his son, thus making the death worthless, and King Gervase is not the type of king to callously kill a child.
When we get to the first chapter, we learn that Marshall has earned the name Ransom due to him being held as such. We learn that Ransom has been kept for years as a hostage and he has developed relationships at court with another child Claire de Murrow.
However, as with everything in Kingfountain, things change. The death of King Gervase signals change for Ransom and he is sent out into the world to make his own way. However, his father, a cold and frigid hearted man has cut Ransom out of the family and tells him that he has no place at his family home. His mother takes pity on him and gives him a letter of recommendation to take up a position with family member Lord Kinghorn. Thus starts Ransom's journey through the tumultuous waters of courtly politics and life as a knight.
Wheeler tells the story of Ransom extremely well. The character of Ransom is likeable, charming, sometimes a little annoying in his absolute goodness. He goes through life just wanting to make his way in the world and serve someone who is as loyal to him as he is to them. However, he goes through life being tested, having temptation put in his way and at times being out in the wilderness.
The plot moves at a decent pace. There were times when I did think that the courtly intrigue did become a little sluggish and you could see that certain situations weren’t going to go that well and you wanted to shout at Ransom that he shouldn’t go there because we know it is going to go bad. However, Ransom refused to listen and did it anyway.
Additionally, Wheeler gives us a pretty solid retinue of supporting characters, both good and bad. Sir James is a good character. I like how he is not as straightforward and when certain events happen with him, I thought I didn’t expect that. There are some surprising events that blindsided me that I didn't see coming.
I liked that there is a reference to David Gemmell in there by calling the horse Gemmell.
Now, there is one thing that I did have a little difficulty with and that was the place names that are used in the world. Wheeler uses a number of English place names, like Folkestone, Connaught, North Cumbria, which on the whole did not bother me. However, when he uses Blackpool as a place name this jarred me a little, as this means something a little different to readers from the UK and I had a little difficulty picturing Blackpool in a medieval way. I know it must have been at some point.
The magic system was intriguing. I certainly want to know more about what a fountain blessed and what it means and what they can do. I liked the structure of the book with the diary entries at the end of the chapters. It is a good device to expand the world and give us another point of view and to detail wider world eventsThis is my first time reading Jeff Wheeler and I enjoyed this book. I will definitely reading the next part of the series
Labels: Book Review