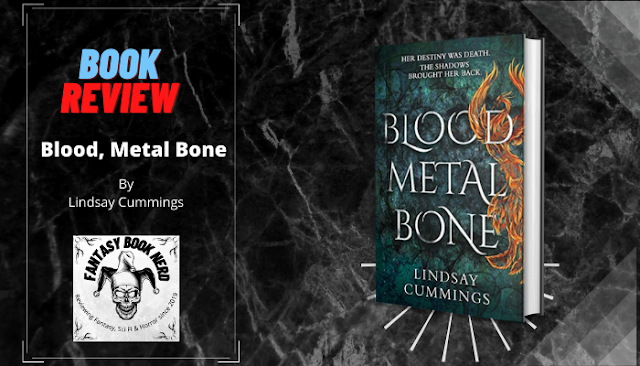 Some little nuggets of information about the book

Lindsay Cummings' new novel is an enjoyable genre-fusing mix of Sci-fi and Fantasy.

Maybe, when picking your next book to read you might have a hard time deciding between SciFi or fantasy. Lindsay Cummings must have been thinking this when writing Blood, Metal, Bone. But then she just thought, well why do I need to choose? Let's stick 'em in a blender and see what it tastes like.

Blood, Metal, Bone tells the story of Sonara. Cinderella bastard child of the warrior queen of Soeria, who when we first meet her is forced to maintain the horses of her mother's stable. She has a deep bond with her brother, Soahm the crown prince of the aforementioned land and jewel of his mother's eye.

However, one fateful day, a spaceship with a phoenix symbol takes Soahm, we don’t where or why, he’s just taken. Subsequently, Sonara gets the blame for this and it is assumed that she has nefariously done away with the crown prince. She is then publicly flogged by her mother, placed on a horse that her beloved brother gave her, and then forced to ride over the edge of a cliff.

Well, there’s no coming back from that one! The End!

Not quite the end, because Sonara comes back from the dead as a Shadowblood, a mysterious, magicy type of … person. The story then moves forward ten years and we meet Sonara again. Now she is working with a gang of cutpurses and she has taken up the mantle of The Devil of the Deadlands, a badass thief with magical powers. However, the shadow of her missing brother hangs over her and she is determined to find out what happened to him.

Lindsay Cummings' book is an interesting one, in that she mixes a number of different things together in this plot-driven story. In fact, she chucks everything at you Medieval fantasy that includes dragons, magic swords and quests, and then she also has a Sci-Fi story that has space smugglers, shady conglomerates, and alternative earths.

The points of view are mainly from Sonara (the medieval fantasy bit) who after been brought back from death, is surviving by being a thief in the Deadlands with other like-minded individuals who have also been brought back from the dead and now have magical powers. The other point of view comes from Karr (the sci - fi bit) who is a space smuggler aboard a spaceship called Starfall. Initially, the book is split into these two protagonists' individual story and you are wondering what on earth the girl with the sword and the boy in the spaceship has in common.

Well, it’s obvious innit, Einstein! Brother gets pinched from his planet by a strange spaceship, what more do you need? Yep, that is what I thought too. However, Lindsay Cummings skilfully weaves, twists, and manipulates this story to leave you with answers that quite honestly, I didn't see coming. And I enjoyed the spaceship ride that she took me on.

However, not only are there two points of view, there are two separate stories happening at the same time and at first, this can make the book a little disjointed, making you split your brain a little bit because you have to throw yourself into two separate settings.

Firstly there’s Sonara’s adventures in the Deadlands as she tries to steal stuff from the tyrannical King of the Deadlands, gets sent to jail, gets saved by her gang (who have a Dragon!), and then gets hired by a deposed princess and her skeleton encased friend to undertake a quest. Oh, and she has to come to grips with the magic powers that she gained when she was brought back from the dead, why she was brought back from the dead with all her mates, and work out her relationships with those around her, including her ex-boyfriend who also had a bit of a thing with the deposed princess and is a bit of a one!

Phew, that’s enough for one book there! However, Lindsay Cummings doesn’t stop there, she also gives us the tale of Karr and his brother Cade, who are escaping the tyrannical Jeb, who took them in as children when their parents were murdered and forced them to do some pretty underhanded jobs for him. To escape him Cade decides that taking up with a mysterious head of the shady conglomerate is the best way to escape Jeb’s clutches

The Head of the shady conglomerate then gives them a quest to get a mysterious object that is located on Sonara’s planet and can save the galaxy from a deadly disease called the ‘Reaper’, which has decimated the people of Earth and forced them to create a second Earth called Beta Earth. In the process, Karr realises that he doesn’t want to do the space smuggling thingy anymore and wants to be an artist, and he has to work out his relationship with his brother.

Now, I know that that sounds like a lot and that it may be a little confusing. But honestly, it kinda works. The stories do converge and become one and that is quite a feat, but Lindsay Cummings manages to pull it off well, and when the stories do converge we rush headlong onto the end of the book and what on earth all those things have to do with each other, beat the bad guy and discover why the Deadlands gang all have these mutant powers and who or what brought them back from the dead in the first place.

I enjoyed this book. Lindsay Cummings is a writer that treats her audience with respect. Whilst it is not up there with something like Grimdark, Cummings does pepper the story with some violence and does not shy away from it. She also introduces some complexity to the plot that twists and turns and keeps you guessing to the very end. She introduces curveballs constantly throughout the plot that leaves your brain a bit numb. In fact, at some points I met myself coming back, there were that many twists and turns in the story.

The only downside is that because there is so much in the book. I didn’t feel that I connected with the characters enough. It was like being in a perfectly decorated house, but something was a little amiss. At times, I didn’t feel that the characters quite hit their mark. For instance, Sonara was not particularly devilish, she could be a bit grumpy, but she wasn’t entirely devilish. For me, it was the same with quite a lot of the characters. I don’t want to go into it too much as this would spoil the plot.

Additionally, I felt that since there was so much in the book, a couple of storylines just didn’t feel finished. Particularly the shady space conglomerate. I just felt that I needed to know some more about them.

I’m not sure if there is another book planned, but there is definitely lots more room to carry on the story of Sonara, Karr, and the magic gang.

On the whole, the book has a mix of fantasy and sci-fi that I enjoyed right till the very end.