A dead Djinn in Cairo by P. Djeli Clark 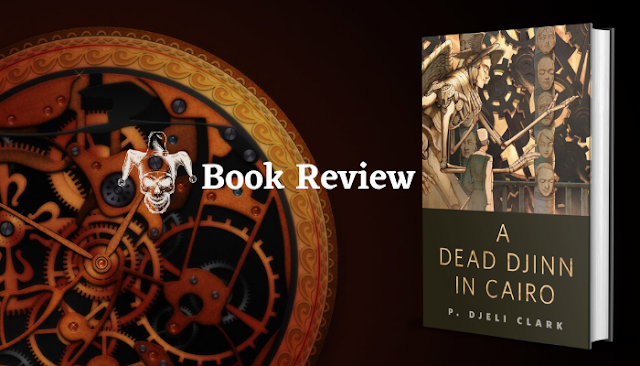 Egypt, 1912. In Cairo, the Ministry of Alchemy, Enchantments and Supernatural Entities investigate disturbances between the mortal and the (possibly) divine.

What starts off as an odd suicide case for Special Investigator Fatma el-Sha’arawi leads her through the city’s underbelly as she encounters rampaging ghouls, saucy assassins, clockwork angels, and a plot that could unravel time itself.

I don't know how P. Djeli Clark does it, he must be a magician becasue he sets up this little self contained story with such craftsmanship.  When I read this was absolutely engrossed with this take on an alternative world in which Cairo is inhabited by Djinn, Clockwork Angels and murderous ghouls, all painted on a steampunk backdrop.

In such a short space of time, he introduces his snarky, bowler hat wearing female protagonist, Fatma el Sha'arawi at the scene of a death in which a Djinn has died in what appear to be suspicious circunstances. Fatma is an investigator in the Ministry of Alchemy, Enchantments and Supernatural Emtities, who besides wearing a bolwer hat, carrying a specially made cane, likes to look 'exotic' by wearing an english style suit. As soon as Fatma quips at the salacious police chief Aasim in the first scene I knew I was going to like her. However, P. Djeli Clark just populates his little world with brilliantly realised characters.

Immediatley you are thrust into a world which is vibrant and colourful, and that is surprisingly expansive. Cairo is brilliantly realised with trams, motorised cariages and strange flying machines. Clark builds the world so vividly that never once are you lost as you move through the city with Fatma.

The pace of the story is like a runaway motorised carriage and it takes you along at such a speed you are shortly out of breath. Honestly, from begining to end not one word is wasted. And before you know it, you are at the climactic end, holding your breath until events play out.

I will most definitelybe seeking out the next instalments of these stories, with the Novella 'The Haunting of Tram Car 015 and Clark's debut novel, The Master of Djinn. Which is to be relaesed in May 2021. I'm not sure if they have Fatma el Sha'arawi in, but I hope so!