The Stone Knife by Anna Stephens 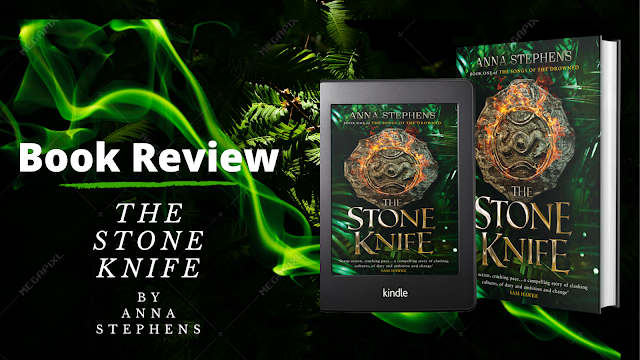 Series: Songs of the Drowned #1

Let me fiirst state that I recieved an Advanced Reading Copy of this book from the Publishers and Netgalley in receipt of an honest review.

So, I originally got this prior to it's release but never got around to reading it this month. I have seen that this book has got lots of positive reviews, and after reading it I can see why.

This is my first introduction to Anna Stephens' writing and I tell you I will certainly be reading her other works. I have had her 'Godblind' Trilogy on my Kindle for ages and have never gotten around to reading it. As I understand it falls firmly into Grimdark, and I must say I am intrigued.

Whilst reading this book, I have watched a number of interviews with Ms Stephens and I have to say that I find her to be an enigma. On the interviews, she seems to be a bubbly, bright woman. However, her books certainly (well this book anyway) had me literally reading with my jaw hanging open at the places that she goes. Anyway, onto the review!

A fantasy epic of freedom and empire, gods and monsters, love, loyalty, honour, and betrayal, from the acclaimed author of GODBLIND.

For generations, the forests of Ixachipan have echoed with the clash of weapons, as nation after nation has fallen to the Empire of Songs – and to the unending, magical music that binds its people together. Now, only two free tribes remain.

The Empire is not their only enemy. Monstrous, scaled predators lurk in rivers and streams, with a deadly music of their own.

As battle looms, fighters on both sides must decide how far they will go for their beliefs and for the ones they love – a veteran general seeks peace through war, a warrior and a shaman set out to understand their enemies, and an ambitious noble tries to bend ancient magic to her will.

So, I have come to The Stone Knife a few weeks after its release date and I have to say that it is a brilliant fantasy book. A full - on sweeping epic that has massive themes of Empire, colonialism, love, friendship, and blind faith.

Honestly, this book is something else. It has everything in it; Gods, Monsters, terrific battle scenes, fully realised characters and mesmerising storytelling.

The Stone Knife is a visceral and epic tale of Empire, that is set in an original world that tells a tale of heroism, love, betrayal and resistance.

The story takes place in the forest land of Ixachipan and revolves around the people of Tokoban and the Yolotlan and their struggle to remain free from being enslaved by the Pechacan, The Empire of Song.
For Generations, the Pechecan have slowly been absorbing every free tribe, enslaving the people that they conquer and expanding the influence of their magic, the song. A hypnotic magic that turns the people into subservient drones, all for the good of the Empire.

However, whilst the Tokoban and Yolotlan attempt to maintain their freedom, other horrors are attacking the people of these tribes in the form of The Drowned. A two-legged amphibious predator that live in the rivers, preying on those who get too close to the water.

Stephens tells the story from the point of view of about seven characters that are from both sides, and they are fully realised characters that you relate to immediately, even though you do not like some of them. The standout character for me was the despicable and devious Enet whose lust for power rivals that of Lady Macbeth. There is no depth that she will not go to in order to cement her status, and the levels of depravity that she stoops to is truly horrifying. However, there are others, Xessa the Eja who protects the land of the Tocoban from the voracious Drowned.

Xessa is a really interesting character. It has to be mentioned that Xessa is deaf. However, Anna Stephens writes her with such depth that her deafness is not the focus of her character. In fact, her deafness is not a disability but an advantage in her role as protector as The Drowned hunt by using a hypnotic song that mesmerizes their prey so that they can feast on their flesh.

The other characters are equally as intriguing, such as Tayan and his husband Lilla, and Pelos, a military leader of the Pechocan.

The world that the story takes place in is refreshing in so many ways. For instance, same-sex marriage is a norm in this world and the intricate jungles of Ixachipan are so intricately woven into the story that the environment becomes a character in its own right. Every change in temperature and climate is palpable and impacts on the story in some way.

The Drowned are fascinating aspects of the story and highlight the differing world views of the two nations. Whereas the Empire of Song sees them as living gods, the Holy Setatme. The free peoples of Tokoban see them as monsters who hunt them mercilessly.

One of the things that I found to be particularly noteworthy was her depiction of the Empire of Songs and the song itself. This was something that blew me away. The Empire seems to comprise of a hive mind and when people are under the influence of the song, they are governed by the Singer and as one they feel the emotions of what he is experiencing.

The Singer is a truly monstrous character even before the story progresses the way that it does. He is spoilt, cruel, and vicious. He treats those around him with contempt and encourages the machinations of those that strove for power and influence.

Stephen's writing is enthralling and absorbing. Initially, she intricately weaves the plot, building both the world and the characters. However, when she comes to the final act of the book she commands the story like a maestro, carefully orchestrating each strand of the story to reach a tumultuous climax that literally had my jaw-dropping as the story takes bloody and surprising turns. At times, the story is akin to a Greek tragedy with the twists it takes and I had to stop for a minute to take a breath.

At times, this is a brutal and bloody book, whilst not grimdark, it is definitely dark. The battle scenes are brutal and the Singer's storyline is both bloody and horrific. However, whilst the story is painted in swathes of blood and darkness there are periods of lightness and romance. There is lots of love and tenderness in the book, particularly with Tayan and Lilla whose devotion to each other counterbalances the darkness. Even the Machiavellian Enet does show some niceness in her love for her son and her role as a mother.

As this is my first introduction to the work of Anna Stephens, I have to say that I will be searching out her other works while I wait impatiently for the second installment of the Songs of the Drowned.