The Cursed Diary of a Brooklyn Dog Walker by Michael Reyes 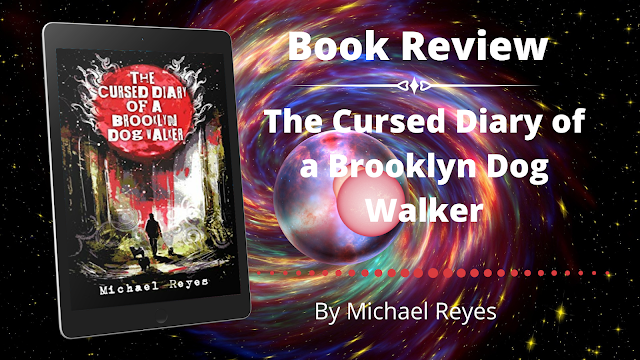 Some facts about the book

Title: The Cursed Diary of a Brooklyn Dog Walker

There's something strange going on in Brooklyn. Occult chants ring out in the dead of night from quaint brownstones and trendy coffee shops. The stench of blood-soaked orgies and human sacrifice wafts through yoga studios and food co-ops. The servants of the demon star have come to power. And they are hunting for the only soul that can destroy them.
Review
Hello Fantasy Book Nerds. Have a read of this latest review. I would like to thank Michael Reyes for getting in touch and sending me his book to review. He said he wanted an honest review, but he still hasn't sent me a fiver (only joking!)
There is a story told long ago that Ira Levin, H. P. Lovercraft, Kevin Smith and Robert Rodriguez met in a bar. On this night (and after consuming far too much alcohol and possibly lots of other tangibles) they decided that they would form a dark collaboration. The Cursed Diary of a Brooklyn Dog Walker is the bastard child of this dark alliance.

Full of hidden death sex cultists hiding amongst the elite of the Brooklyn glitterati, evil forces that want to subjugate the planet and mysterious gods hammering at the barriers of our world, Michael Reye’s book is a glorious piece of bloody fun.

The story starts with our hero, Jesse Ventura, finding a mysterious diary in the park where he walks the dogs of his favourite client (as he is the said dog walker). When he opens the book, strange events and mysterious portents occur. Clouds take on the visage of snakes, mysterious animals appear in the park in the middle of Brooklyn. What on earth is going on? Well, that becomes clear later as the story starts on its frenetic journey to get the girl and stop the baddies.

Well, I have to say that I enjoyed this book, and thanks to Michael Reyes for reaching out to me to read this book. It is an amphetamine paced, absolutely, full on Nick Cage piece of sublime madness. I honestly did not know what to expect when I started this book, but when I started, I simply could not stop! Honestly, this book goes completely all over the place.

Now, whilst I say that this book is fun and all over place, do not think that I mean in terms of Michael Reyes Writing. Structurally, the book is tight! The plot, the pacing, the characters and the dialogue are all excellent and Michael Reyes takes you on a tightly wound journey right until the end.

To say this is a short book, Michael Reyes packs in a hell of a lot of stuff. I am not going to tell you much about the plot, but suffice to say that the book gets going, Reyes ramps the action up to eleventy stupid and my advice is to just go along with it. It’s well worth the ride.

The characters are all well developed even though most of them are just batshit crazy, especially Jesse’s room mate, Marvin Trout. The LArpg’ing loving drug dealer who, when he makes his short appearence is completely off this planet. Then we have Jesse’s best friends, the dogs. Jesse renames most of the dogs, giving them all names that he finds funny or maybe describe their personality. We have the Chow Chow brothers and Dirty Little Bastard (I think you get the general tone).

Unfortunately with all the stuff going on in the book, the antagonists do not get as much development as other characters. I would have liked to have seen some more backstory to how the cult was able to hide and how they developed through the ages, but it doesn’t spoil the enjoyment of the book and there is only so much you can put in this amount of pages, and there is a short diary entry from Jesse’s mentor, that whilst brief, does give a whole load of information.

I really liked Reye’s dialogue. It’s funny, snappy, full of slang and about as frantically paced as the plot.

Reyes books is so much fun. It is a full throttle barrel ride that chucks everything at you, including the kitchen sink. And when it ended I was gasping for air.