We Are The Dead by Mike Shackle 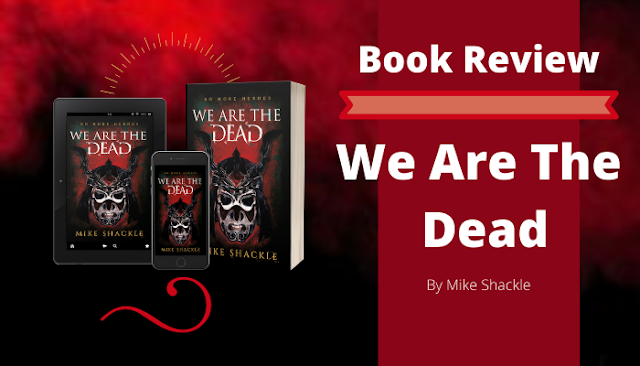 Title: We Are The Dead

The war is over. The enemy won. Now it's time to fight back.

For generations, the people of Jia - a land where magic has long since faded from the world, clinging on in only a few rare individuals - have been protected from the northern Egril hordes by their warrior caste, but their enemy has not been idle. They have rediscovered magic and use it to launch an overwhelming surprise attack. An invasion has begun.

And in moments, the war is over. Resistance is quashed. Kings and city leaders are barricaded in their homes awaiting banishment and execution, the warriors are massacred, and a helpless people submit to the brutality of Egril rule.

Jia's heroes have failed it. They are all gone. And yet... there is still hope. Soon the fate of the kingdom will fall into the hands of a schoolboy terrorist, a crippled Shulka warrior and his wheelchair bound son, a single mother desperate enough to do anything she can to protect her baby... and Tinnstra, disgraced daughter of the Shulka's greatest leader, who now lies dead by Egril hands.

A brand new epic fantasy: gritty and modern featuring a unique ensemble of characters who will lead a revolution against their overlords.
Review

If I could liken a book to a song, then I would liken ‘We are the Dead’ to ‘Bleed’ by Messhuggah. Hard, uncompromising and totally bloody brilliant. This is the first book in Mike Shackle’s ‘The Last War’ Trilogy and I don’t know what to say. This book is something else.

The usual path for a fantasy book is to culminate in that final climactic battle. However, Mike Shackle takes a totally different view and thinks it is a good idea to start the book with the ultimate battle, and in this world the Evil Empire wins. They don’t just win, but they pulverise the good guys and then rout the rest of the country.

Well, that took me by surprise, I must say! Where on earth do we go from there? Urm, I’m not sure. It’s a good job that Mike Shackle does.

We are the Dead is a book about oppression, rebellion and survival. It’s about how normal people survive in extreme circumstances and the choices they make when placed in an impossible situation.

I really enjoyed this book. It is a gripping narrative that has you guessing what on earth is going to happen next.

I have got to say that Mike Shackle has done something different with We are the Dead and I loved every minute of the ride that he took me on.From beginning to end, this book never lets up.

The book starts with a student, Tinnstra on the verge of completing suicide due to her disgracing herself in some way for an unknown misdemeanour. We learn that she is at military school in the country of Jia, training to be an elite soldier called The Shulka, just like her father.

We then cut to the north of the country, where the army of Shulka are prepared to meet the Egril, an undisciplined, barbarian army. As we learn, the country of Jia was the home of magic and the Jians overcame the Egril at some point in the past. However, the magic disappeared long ago and now the Shulka, a set of elite warriors,  protect the country from invasion..

What happens next, nobody is prepared for. Jax, the leader of the Shulka, believes that this is going to be an easy battle. However, the best laid plans and all that. Subsequently,the Jians learn the Egril are not what they seem. They are a highly organised machine that have magic, monsters and weapons that can destroy the Shulka with no chance of fighting back..

What comes next is a tale of oppression and fear. All the heroes of the land of Jia have been decimated and there is no one left to fight for the people. The Egril are cruel and rule with a hand of terror.

The Egril have got to be the best set of fantasy villains that I have read. They are truly  horrible and Mike Shackle writes so well that the feeling of oppression is palpable.  They dehumanise the people that they rule and treat them worse than animals. They have no qualms about killing anyone for the slightest thing and regularly do. As you read the book you can almost smell the fear that the inhabitants of Jia live with every day.The Egril are brutal and use this brutality with great abandon.

As we move through the story we are introduced to the characters. Now don’t be expecting heroic magic and sword wielding heroes that will ride in on a white charger and save everyone, coz it ain’t gunna happen. In this book, most of the characters are unlikeable or have a fault running through them so wide the sea would be swallowed.

We meet Tinnstra in the first instance as she is preparing to end her life. And it is at that point we realise that Tinnstra is so consumed with fear that she is willing to withdraw from everything, even life. We have Dren, a bombastic teenager who is willing to send anyone to their deaths without a thought. Dren has no care, and we see this early on when he coerces a young mother to be a suicide bomber and kill a load of people that he believes are collaborators with the enemy. He has no regard for life at all.

There are other characters, like Jax, the leader of the Hanran, who was broken in the first assault by the Egril and has arm cut off, and then there is Yas, a single mother whose husband was killed horrifically by the Egril, leaving her to bring their child into the world.

Throughout the book. The characters develop in many ways and experience life changing events. They all go on their journey and all  change in ways they cannot imagine. I found this to be a strength to the narrative in that whilst you may not like the characters initially, your relationship with each individual character changes throughout the book.

The pacing of the narrative is supersonic. Mike Shackle writes with a clipped prose that does not waste a word. HIs descriptive prowess is brilliant. Sometimes a little too brilliant, particularly when we get to a scene with Jax and Darus (an Egril Chosen who has been imbued with power, and the fifth pov in the book). This made me squirm, really squirm as the violence that Darus meters out on Jax is gut wrenching.

The other thing is that Mike Shackle writes action scenes that are so cinematic it is like having a TV in your head.He is totally unflinching in describing the violence of the situation, describing each sword stroke and the damage that results. At times, it reminded me of something from a Wachowski brothers film.

He does not fluff the brutality that the oppressors meter out to the citizens of Jia. Nor does he make any judgements on the lengths the characters will go to, to get their freedom. And this is something that struck me throughout the story. Our ‘so called’ heroes do some nasty stuff, and I mean the types of things that a war crimes committee would have a field day with. However, the character’s are not held to account for  the actions that they take and you understand the decisions that they make.

Despite it being a war torn country, Mike Shackle builds a rich world. Whenever the book moves to the different cities in the country of Jia you get a distinct difference in the environments that the characters inhabit. Shackle describes a world with a rich history, giving you all the background you need to picture the environment and the people that inhabit it.

As I have said before, Mike Shackle’s books have placed themselves firmly in my all time fantasy favorites and this series deserves all the praise that it gets.