Quick Shot Book review - A Threat of Shadows by J. A. Andrews 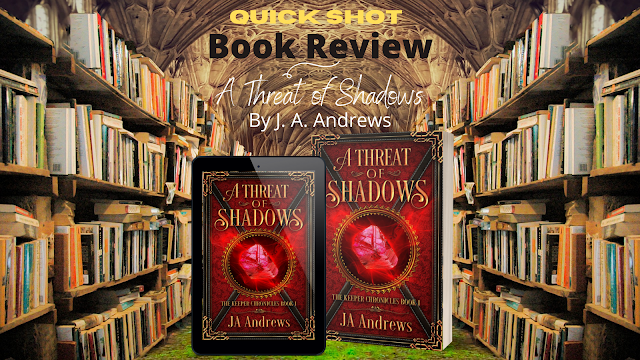 Let's give you some facts about the book

Title: A Threat of Shadows

Alaric betrayed everything he believed to save Evangeline — and failed.

His last chance to save the woman he loves lies in an ancient Wellstone, a repository of power, buried and lost long ago.

Luck—or something more troubling—leads him to a small group searching for the same stone.

and an elf with an unsettling amount of power.

If he can gain their trust, they might help him find the cure.

But the Wellstone holds more than he knows, and a terrible evil he’d thought defeated is stirring again, searching for the stone.

Can the companions survive a traitor, a dragon, and their own pasts to reach the stone before time runs out?

J. A. Andrew’s ‘Threat of Shadows’ harks back to the fantasy stories of old. It is kind of like the old Forgotten Realms type books or Terry Brooks.

The story revolves around a ‘Keeper’ (an order of clerics who store memories, histories and stories) called Alaric who has abandoned his role in order to search for a cure for his wife, who was accidently poisoned by a group of villagers in an earlier incident.

He returns to his old life to find knowledge on how to cure her whilst she is kept in stasis to slow the spread of the poison.

On his journey, he meets a dwarf, an elf, a human and a bumbling wizard in a tavern as he sets off on his journey, and is drawn into a quest to stop the return of an evil that has lain dormant for seven years.

This was one of those books that I picked up without knowing anything about it and was pleasantly surprised. It’s a light-hearted read, with mostly well-rounded characters, a fast-paced plot, a decent magic system and some decent world building.

Alaric the Keeper is a strong lead character that has done some questionable things to save his wife and is haunted by his past.

Ayda the Elf is a typical elf, although she does hold some secrets of her own and she does grow in throughout the story.

Then there are the other supporting characters, Gustav the Wizard, Douglan the Dwarf and Brandson & Mille.

Whilst the main characters are well rounded, I did wonder about the supporting characters. Douglan is the typical complaining dwarf, and in all honesty, I could not determine what the role of Brandson & Millie was in the story as they are barely utilised in most of the book.

In terms of the plot, it didn’t really hold many surprises and was quite functionable. Although one plot device that I didn’t like was the frequent reference to the main antagonist as an ‘idiot’. I didn’t think this worked. As throughout the narrative, the 'idiot' of an antagonist stays one or two steps ahead of the main characters, so he cannot be that much of an idiot.

However, I don’t hold this against the book, and it didn’t spoil my enjoyment. There are some good ideas in the book, like the well stone. A magical stone that stores memories. And the characters deal the problems that they face in an original way. Not necessarily restoring to the usual hack and slash of some fantasy books

Threat of Shadows is part of a trilogy and I will read the next ones out of interest to see how the book develops.