A Ritual of Bone by Lee C. Conley 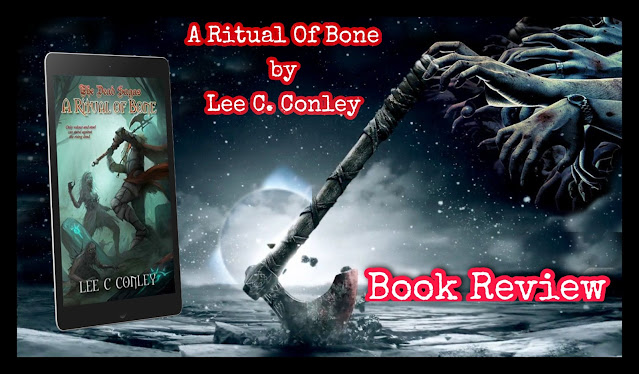 Before we get on with the review, here is a bit of information about the book
Title: A Ritual of Bone
Author: Lee C. Conley
Series: The Dead Sagas
Publisher: Wolves of Valour Publications
Pub Date: 17 Jun 2019
Synopsis
'Only valour and steel can stand against the rising dead'

Arnar is a land of warriors, its people as stalwart as the stones themselves. In a land of dark forests and ancient hill forts, a forgotten evil is awoken by curious minds.
The Great Histories and the Sagas say nothing of this evil, long passed from the memory of even the studious scholars of the College. For centuries, the scholars of Arnar have kept these records and preserved the knowledge and great deeds of a proud people. The story of these peoples forever chronicled in the Sagas of the Great Histories.
But now the evil spreads and the dead walk in its wake, terrible creatures roam the night and even the spirits are restless. The Dead Sagas could perhaps be the final chapters of these great records.
Many threads entwine to tell this Saga, interweaving the tales of those who played their part in the search for answers and ultimately their fight for survival. Amid plague, invasion and terror, the inexorable rise of the dead sends a kingdom scrabbling to its knees.

This dark fantasy epic combines dark malign horror and gritty survival adventure as the Dead Sagas unfold in a world where honour and renown is all, where beasts and savages lurk in the wilderness, and where sword, axe and shield is all that stands between the living and the grasping hands of the dead.
Review
Hello Fantasy Book Nerds.

This is a book that was sent to me by the author, Lee Conley. Lee very kindly pinged me on Twitter asking if I wanted to read his books, no pressure like! Here they are, read them at your own leisure.

I had seen Ritual of Bone and was interested in reading this, so I thought, yep ok then! I am glad that I did as I really enjoyed this book. In fact, I liked it more than I thought as I keep catching myself mulling over something I had read in the book, and then something else would pop into my head about it.

Now, if anyone doesn’t know, A Ritual of Bone is a horror story set in a fantasy world. It tells the story of the walking undead, otherwise known as zombies, who invade the viking inspired world of Arnar.

When I started reading this, I quickly found that the book was not what I expected. In my head I thought it was going to be the typical zombie invasion set in a fantasy world and that there would be a whole load of sword and zombie action. I think I thought that it would be something like The Walking Dead meets The Vikings.

Well, I soon found out that it was so much more than that, it’s a slickly written atmospheric chiller that builds the tension slowly, deliberately turning the screw ever so slowly that all of a sudden you realise that you are holding your breath in anticipation for the next chapter.

Let me tell you, there is a lot going on in this book. Initially, the book is told in multiple points of view and it flits to different parts of the country as there are multiple events happening at the same time. At first, I did find this confusing, but it is not something that I am unused to. It’s quite a cinematic device and it works well. Although, you don’t necessarily form the typical relationship with the protagonists until later on when the points of view become more condensed as does the world view.

As I said there is a lot going on in this book.Not only do we have multiple points of view, but we also have the differing strands of the infection and its effects. There are the scholars performing ancient rites in places they should leave well alone. A contagion that comes in with a ship, the return of ancient cannibalistic tribes that come forth from the dawn of time, the rise of the shambling dead and the infected.

I liked all sorts of things in this book, and as I said, little things keep popping in my head about it and I will find myself dwelling in certain aspects of the book. One of these are the ‘zombies’ themselves. Conley doesn’t just draw from one aspect of zombie fiction, but there are a couple in there. For instance, I thought that the depictions of the walking dead would revolve around the Romero representation, and in some aspects they are there. But the ‘infected’ are different. These are more like Girl with all the Gifts/28 Days Later type of representations. The fast moving animalistic zombies. I thought I also caught a whiff of ‘In the flesh’ too, particularly when Conley describes the infected, and the fact that at some points they still maintain some semblance of consciousness before they turn into animalistic hunters.

Conley really makes use of atmosphere and from the start he adds layers upon layers to create a pervading sense of doom. He smatters the narrative with an isolated incident here, an isolated incident there. However, most of these narrow by the end of the book to give a satisfying culmination to the book. However, I still have questions and I am hoping that these get answered in the second book. Like what is the significance of The Apprentice, an unnamed character that opens and closes the book. Why are the cannibalistic tribes there? Who is driving this? Is there some driving force? See, it keeps creeping in!

Whilst Conley’s book is intrinsically a horror story, there is the fact that he is walking between two worlds. I cannot forget to mention that the book also has a strong fantasy world. Conley does a good job in mixing the two together, as not only does he ramp up the terror but he also builds a pretty solid fantasy world, and it has to be said that he does some pretty excellent world building. You get a really good sense of the world that the story is taking place in and it creeps up on you how good this world is. At no point did I lose my directions even though he goes from location to location throughout the book.

Additionally, he has some good characters in there too. And again, he cleverly uses horror tropes in there that you recognise and come from all different classes of people. He has the upper crust rich bloke in Arnulf, who is pulled from the comfort of normal life to be thrown into inexplicable circumstances. The everyman with Bjorn, who is once both relatable and likeable and then the lower class Nym, who is ekeing a meagre existence for her brother and herself.

I cannot forget the action sequences in the book. Conley writes really good action. You can feel each blow as it falls.

All in all, I enjoyed A Ritual of Bone and will certainly be moving on to the next. As I said, I have questions and I want to see what happens and if they get answered.
Labels: Book Review