A Fool's Hope by Mike Shackle 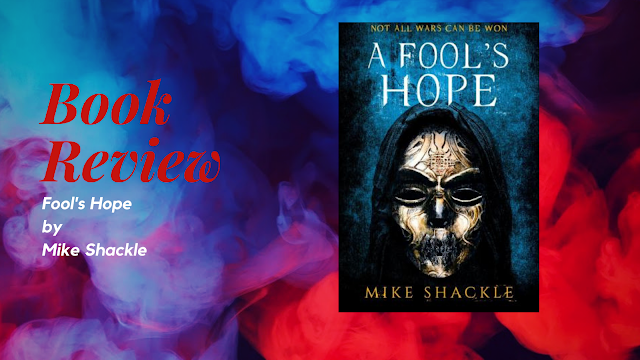 Some info about this little tome: -

Author: Mike Shackle
Title: Fool's Hope
Series: The Last War
Publisher: Gollancz
Pub Date: 3rd December 2020
________________________________________
Synopsis
The sequel to the darkly fantastic WE ARE THE DEAD: with more unflinching action, A FOOL'S HOPE sees Jia's revolutionaries dig in their heels as they learn that wars aren't won in a day.
War takes everything.
From Tinnstra, it took her family and thrust her into a conflict she wanted only to avoid. Now her queen's sole protector, she must give all she has left to keep Zorique safe.
It has taken just as much from Jia's revolutionaries. Dren and Jax - battered, tortured, once enemies themselves - must hold strong against their bruised invaders, the Egril.
For the Egril intend to wipe Jia from the map. They may have lost a battle, but they are coming back.
If Tinnstra and her allies hope to survive, Jia's heroes will need to be ready when they do.
Review
For the past week or so, I have been living in Mike Shakle's apocalyptic world, and I have to say it has been a harrowing experience.

Both Fool's Hope and We Are The Dead, are a tale of War. However, this is not epic fantasy battles where everyone puffs out their chest and prepares for combat. This is war in its most brutal and basest form. And guess what, it ain't pretty!

If you have read the first book in Mike Shakle's 'The Last War' series you know what to expect, right? Wrong!

Yep, you got it folks - expect the unexpected! And that is me covering the plot elements of the book. You need to experience this book with no preconceived ideas. You need to go in totally blind and let the story take you where it's going to go. And then, when you get to the end of the book, get back to me and tell me what you thought. I guarantee, you'll be like, whaaat?

So, let's get onto the other things about the book.You know, those bits I can talk about! I have to say that when I first read ‘We are the Dead’, I was taken aback by the story. Mike Shackle writes a phenomenal war story and he mixes this in with all the elements of fantasy to make something that is absolutely amazing.

In Fool's Hope, the story begins immediately where the last book ends. Shackle seamlessly continues with the 'what happens next'. And from page 1, the action begins and you are thrown into the story as if you never left it. As you will know with Mike's pacing, full throttle is just too damn slow and you immediately get thrown into the story and shown what it’s like to live in a world that has been torn apart by war and oppression.

At the beginning of our journey, we start with a new character and a new perspective, and through the introduction of these new characters, Shackle introduces the world view of the oppressors, as well as the oppressed. This is the thing with Mike Shackle. All the elements of fantasy are there. There’s world building, there’s magic systems and all the other elements of fantasy that you expect to see. However, in his hands, these elements are malleable and are shaped in ways that you don’t expect or hidden in the places that you least expect to see them. Honestly, I can’t say how much I have been impressed with his books. For me, he has brought something new to the genre and surprised me.

In both his books, Mike Shackle has a really good way of writing prose. I suppose in the old days it would have been called hard boiled, but it’s not wholly that style of writing in that he does have elements of tenderness in his books, like the relationships between Yas and little Ro, or Tinnstra an Zorique. However, when it comes to the violence of the battle or fight scenes, Shackle presents them in a tough and realistic way. He doesn’t flower up the violence. He describes it in a way that are both unglamorous and unsentimental and this style adds to the cinematic flow of his action scenes. It’s not that his fight scenes don’t have flourish and flair because they do, but let’s be honest here, battle and death are not pretty, and in Mike Shackle’s world they are not presented as such. What matters most is survival, and that is why the characters do what they do. They do not revel in the glory of battle or tell stories of the foes they have vanquished, they simply do it to survive.

In terms of the characters in Fool’s Hope, their journeys are expanded in such an unexpected way. I never saw any of these things coming and I could never have predicted that the main characters' arcs would develop in such a way. On that note, I am going to have to stop there because to do so would invite spoilers, and we know that I am staying away from them as much as possible. What I can say is that a couple of new characters join in this book and I am sure that you will take to at least one of them like I did. Ralasis, is the swarthy sea captain that we meet at the beginning of the book. However, he gets more of a supportive role later in the story and again, Shackle does not waste a single character and he quickly becomes a major part of the story.

I really enjoy Mike’s way of writing. It’s extremely graphic and cinematic.He writes action scenes that at once remind me both of the Matrix in one aspect and then flits to Tarantino levels of brutality. I could easily imagine this as a graphic novel, and having seen representations of Tinnstra on his website (which are pretty darn good, I tell you), I would definitely be up for reading it.

No word of a lie, I really do rate Mike Shackle books in the top ten of my favorite books of all time. They are stunning books which totally blew me away, and in a year where we have had so many good books, Mike Shackle presents us with one of the most memorable stories that I have read all year. He is now on my list of authors that whatever they write, I will be up there buying it straight away, no questions asked!

Honestly, when you start reading Fool's Hope, you will not put it down. It took me two days to read because I simply could not bear to leave the story for one minute, the book grabbed me by the throat and wouldn’t let me go until I had finished. And if you think I am being a bit fanboy in my review, I don’t care, coz I am!.
I gratefully received an advanced reading copy from Netgalley and the publisher, Gollancz in exchange for a honest review. I think the above gushiness covers that, don't you? And now it is published I am the proud owner of this bad boy!
Labels: Book Review