The Fires of Vengeance 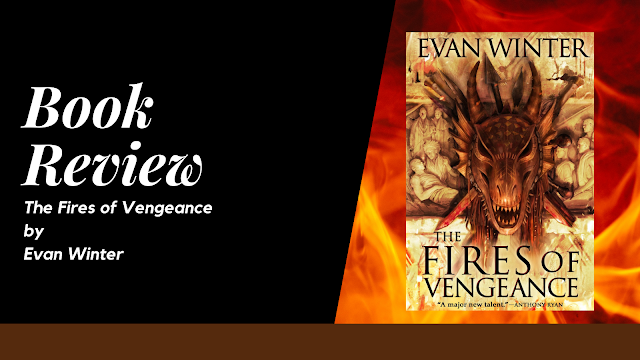 Advanced Reading Copy (ARC) gratefully provided by Orbit and Netgalley. The enjoyment was all my own.

Immediately starting from where The Rage of Dragons finished, The Fires of Vengeance finds us once again back with Tau Solarin as he and Queen Tsiori desperately plan to stop the invasion promised by the Xideen people. Hadith composes a complex plan to hopefully stop the Warlord fulfilling his promise to launch all-out war against the Omehi people.

Meanwhile, in Palm city. Ambassador Odili has declared the Queen’s sister as the rightful ruler and is gathering his forces to launch a civil war that will tear the Omehi people in two.

However, demons are breaking through the barriers of hell and Tau must protect his Queen and all those he holds dear.

With his new book The Fires of Vengeance, Evan Winters firmly establishes himself as one of the brightest new voices in fantasy as he weaves a captivating tapestry of pulse beating plot and rich characters, all encapsulated in a distinct world that will get it’s hooks into your reading brain.

Everything is far more developed in this book, his characters, his plot and the world that the Omehi people inhabit.

In the Fires of Vengeance, the plot slows down a little bit and I think that the book is altogether better for it. I also did not find it as dark as the first book. Whilst Tau’s thirst for vengeance is still there, Winters gives the reader some breathing space to allow the characters to develop, and I think some of my favourite pieces are in these quiet moments, and this is where Evan Winter’s writing shines through.. For instance, there are some passages in which Tau spends time with Queen Tsiori in her tent listening to the secret history of the Omehi people whilst sat around a fire. I loved these moments and the scene that Winters describes. I could almost smell the smoke and feel the heat from the fire.

The character of Queen Tsiori is expanded considerably, and we start to understand her motivations for the actions that she is taking and how she actually wants to unite the Omehi people. But not only that, how she wants to diminish the cultural dissonance between the ruling class and the lessers of the Omehi.

Despite it been quite brutal in places, Winters also injects humour and tenderness into the story, and there are many times the book passes the six laughs test, as I laughed or caught myself smiling quite a lot through this book

There is the introduction of some new characters in ‘The Fires of Vengeance’. I have already told you that Queen Tsiori is expanded on, but there are also others which hold and contribute to the story. The standout of which is Nyah, the Queen’s Vizier. She is at once hard and unforgiving, but she develops throughout the book and you begin to see her softer edges. In fact, for me Nyah gets one of the standout lines of the whole book. This happens when she is with her daughter just before one of the big battle scenes. As the men are discussing tactics, Nyah turns to daughter and states

“This, Chibo, is what men call leadership” Nyah said walking up with her daughter. “You can tell they are doing it when you see several of them not doing any work.”

That had me laughing for a good few minutes.

In addition, the two Queens handmaidens are equally as good as they become part of Tau’s team of fighters and they establish themselves as a prominent part of the story.

But don’t worry, the old guard are there too, Hadith and Uduak and although they don’t play as prominent a role as in the first book, it is good to see their inclusion in the story and again there are some moments of tenderness in their story. As injury befalls Hadith, we see just how close the relationship between Hadith and Uduak has developed and how close they are as friends.

Whilst on the whole, the story takes place from Tau’s point of view, there are some instances where this changes and we get to see how others view Tau. One of these is when the point of view changes to Duma. We get to see Tau through the Xideens’ eyes, and on another occasion, the point of view moves to Esi and we see Tau as an enraged demon coming to change her life for ever.

I can’t say how much I enjoyed this book. Unfortunately for me, I finished the book just before going to bed and I was that stoked up I couldn’t sleep for the next hour while I came down a bit!