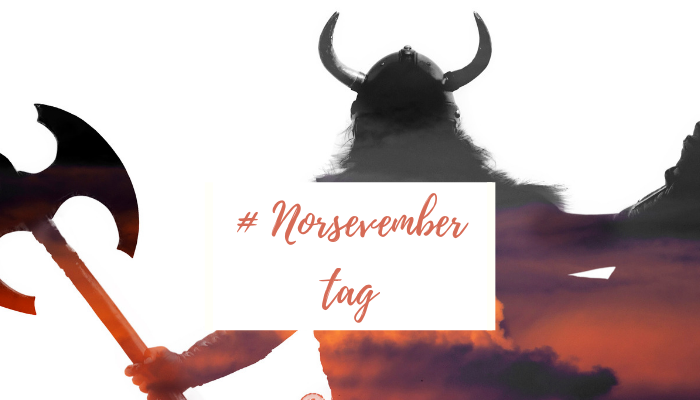 As we are still in Norsvember everybody thank @blogspells for doing this wonderful event and organising this really good event. I would also like to thank Sue's Musings@SueBavey for tagging me in this fun book tag challenge that is the brainchild of Faye at @Bookchocoholic
Faye's video explaining the Tag challenge is below (hopefully it will work). Anybody who wants to take part can. You don't need to be tagged. And anybody that is tagged, does not have to take part.
Paperbackbex’s choices for the Tag can be found here. Find her on Twitter @paperbackbex Read and follow her blog here:
https://paperbackbex.wordpress.com/2020/11/15/norsevember-tag/amp/?__twitter_impression=true
So without much further ado, let's get down to my choices.

Now I am going to cheat a little bit here as I am going to put in one that I am currently reading. So, for this choice, I am going to choose The Bone Ships by R.J. Barker. Unfortunately, I cannot give you a full run down, but I can tell you my thoughts on it so far. 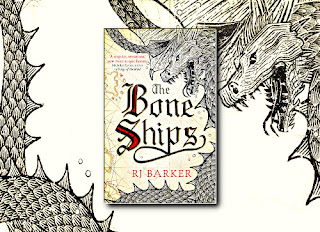 The Bone Ships is the first book of RJ Barker's Tide Child trilogy. This book is nearly all set at sea with a brief foray (so far!) on land.

The story revolves around Joron Twiler. A man sent to the ships of the dead, the black ships. These ships are the places where the proud fleet of the Hundred Isles send disgraced sailors to rot and die with no hope and no purpose.

The Hundred Isles is a tough place to live and danger and menace lurk everywhere.

At the beginning of the book, we find Twiler in his usual inebriated state, Ship Wife (captain) of the ship The Tide Child. He is suddenly forced into a duel with former ship captain Lucky Meas, who beats him and takes his ship as forfeit. What follows is a tale of adventure.
The land is populated by strange people and even stranger beasts. We have the Arekeeshans, a species of fabled giant sea dragons that are prized for their bones that build the ships of the Hundred Isles and help maintain their war with the Gaunt Isles. Then we have the Guillames, a kind of walking and talking bird that controls the winds and enslaved on the ships of the Fleet.
I have to say that I am really enjoying this book so far. If you like grim fantasy, then this is definitely should be on your list of goodreads

2. Horned Helmets – a book with a lot of metaphor. 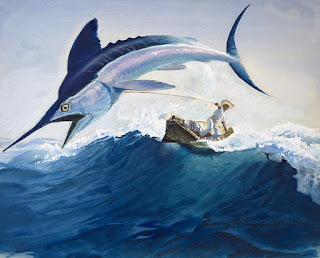 For this one I am going to chose The Old Man and The Sea. this is the story of an experienced fisherman who fights a marlin in the sea . This is Hemingways final published work and reinvigorated Hemingway's work.
The story centres around the struggle of man against the forces of nature and the fisherman, Santiago fights and struggles with the giant fish that he catches. He battles him and eventually reels him in.
I was absolutely stunned by this book. The prose is gorgeous, and it really took my breath away. I had never read any Hemingway prior to this, but this is a book that has stuck with me.
3. Spread Eagle – a gruesome book 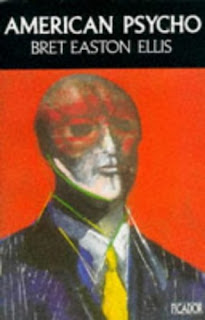 Gruesome books. I think I have read loads in my time. I thought about putting some horror in here like James Herbert, or maybe some Clive Barker. However, what I decided to go with, was Brett Easton Ellis's 'American Psycho'

This is truly a horrifying book. The main protaganist, Patrick Bateman, is a wealthy Wall Street banker, who spends his life in a hedonistic haze. However, at night, he is a sadistic serial killer who preys on innocent women.

It has to be said that this is not for the faint hearted, and I must say that I have read this book once, and I don't want to read it again. A truly disturbing book.

Badass ladies, hmmm, bad ass ladies. I have read a lot of those lately,but I think the one that I am going to go for is the Mistborn Trilogy. Vin is a great female protagonist that develops thorughout the story. She starts off as untrusting and virtually feral really. But she devleops throughout the trilogy as being one of the most badass heroes in fantasy literature. She is a great character, and The Mistborn series by Brandon Sanderson is a really good fantasy series from a master of the genre.
5. The Halls of Valhalla – a book about death

For this one, I am going to take the prompt literally and give you a book about Death.
Terry Pratchetts 'Mort' 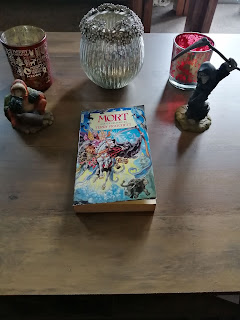 This book started my love of Terry Pratchett and Mort is one of my favorites. It tells the story of Mortimer or 'Mort' for short. He is described as a strange lad that nobody wants to employ. When he goes to the apprenticeships fair, he is the one that noone can find a use for an he is the last to be picked. As the clock strikes twelve a mysterious figure on a white horse carrying a scythe employs 'Mort' as his apprentice. The figure is Death himself, and he takes Mort to his home to learn him about 'the job'. This is such a brilliant book with lots of laugh out loud bit in it. But like all Pratchett it has some commentary about life, institutions or anything that took his fancy. This is the first full length book featuring Death. If you haven't read any, I strongly urge you to do so. I know it seems big, but there is a good reading order on the Terry Pratchett website.
6. Odin – a book with gods at its center 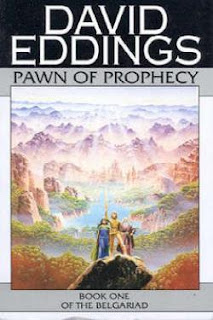 How many books have I read with Gods it's centre. A lot, a heck of a lot.
The book  I am going to bring to the table for this one is David Eddings 'Pawn of Prophecy' This is a book that is very influential for me and the series 'The Belgariad' was the first set of books that I felt that feeling of anticipation every time a new one came out.
As soon as it came out, I would be in the Library hounding the librarian to save it for me. I love these books immensley and they hold a special place in my heart. They are at once fantasy, high adventure, coming of age and have titanic battles between gods and men. The story centres around a young farmhand Gariad who is brought up in a belicose existence, with his guardian Aunt Pol. However, one day, the local tinker, Belgarath visits the farm and his life is turned upside down. Thus begins the adventure in strange lands, with strange people and a prophecy to fulfil.
7. The nine realms – a book set in another world 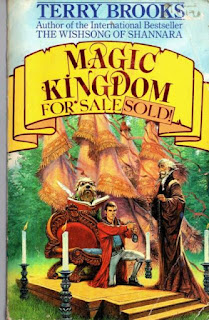 Another one of my favorites. It has been a long time since I read this. Terry Brooks is obviously more famous for his Shannara books, but this is not based on any of these and is set in the Kingdom of Landover.

The story centres around Ben Holiday, a trial lawyer who has recently lost his wife and unborn child in a car accident. He sees an advert in a posh christmas catalogue advertising a magic kingdom for 1m dollars.

He buys it and receives a medallion which transports him to the magical Kingdom of Landover. The magic land is in total disarry and he actually only has four loyal subjects, the Barons refuse to recognise him as king and the Lord of Demons, The Iron Mark has killed all the previous kings.
8. Mitgard – a book set in our world
A book set in our World. Hmm a toughie. I am going to go with 'The Vets Daughter' by Barbara Comyns 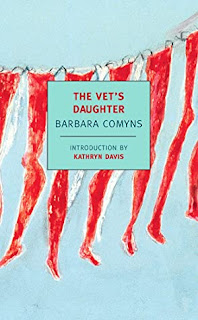 This is a strange little book. The story revolves around a young girl, Alice Rowland who lives in Edwardian London with her mother and monstrous father, the vet of the story.
I had never heard of Barbara Comyns previously and heard somebody discussing this book on a BBC radio programme.
If you like Shirley Jackson, then you will get on with this book. It reminds me of The Sundial in a way. This was written in the fifties and some of the language does show. However, if you want a short dose of strangeness read this.
9. Loki – a book that deceived you I have to say, I had no idea with this book. I had not read anything about it, didn't know the story line and had not heard of the author. The story is about a man called Stratus, a one man killing machine that wakes paralysed in a field. He has no idea who he is, where he is or even why he's there. The book is written in the first person and we view the world through the eyes of Stratus as he discovers more about where he is, who is and why he's there.
I must say I enjoyed this book immensely, it's good fun and has a wicked sense of humour. I have a review of it knocking about somewhere!
10. The Frozen North – a book with a cold setting
I've got to say, I was having a bit of a difficulty with this one. It really got my brain a'ticking.
When I had wracked my brains some, it came to me. The Shining by Stephen King.
This is one of King's finest books. Obviously, when I think of this, I immediately think of Stanley Kubrick's iconic film with Jack Nicholson. However, on seeing that, it prompted me to go read the book.
The book is a bit of a different beast to the film, and although I cannot recall all the details of it now (I think I was a teenager when I read it, I can remember how much I loved it. I think one day I may have to revisit this again.
If you haven't read it, It's about a would be author who takes a job as a caretaker of The Overlook hotel when it is not being used. In tow are his son, Danny and his wife Wendy.
Danny has supernatural powers and he can see The Shining around people.
As the weather changes and the family get snowed in, The Overlook exerts its power over the family. As Jack descends into madness, the ghosts become more and more terrifying.
If you haven't read this book, I would urge you to have a read of it and you will see why King is regarded as one of the best horror writers. It really is a masterpiece
Labels: Book Post