Legacy of Steel by Matthew Ward 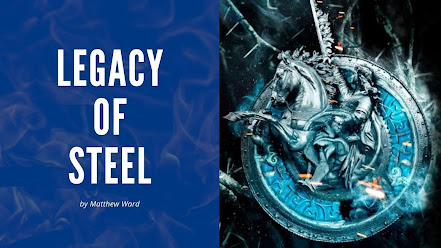 A few details about the book
Legacy of Steel continues the story a year in the future from where Legacy of Ash left off. The story begins with Melanna, the tradition smashing Princessa of the Hadari, finally being accepted as the Emperor Kai Sadarn’s heir. However, the ceremony is marred when an unknown assailant attacks her father.

Meanwhile, the Tressian council is rebuilding and order is being restored to the Republic after the events that ended the last book. Councillor Malachi is elected to lead the council as First Councillor. However, the promises and bargains he made in the past reverberate in the present, subsequently pitching the City of Tressia into a war with forces long thought dead. This will lead to horrifying consequences, both personal to First Councillor Malachi and to the people of the city itself.

However, this is not the only threat. The Emperor Kai Saran of the Hadari has raised the full might of the Hadari Empire in a Holy war against the Republic. He will lead his armies to the border, and with the aid of the divine Ashana, he overruns the impenetrable fortress of Ahrad. Vowing not to stop until he has tore apart the Tressian Republic, at any cost!

As the battles rage, one man is needed. Viktor Akadra, the champion of the Republic. But he has forsaken the Republic and his role as champion,lost and broken by grief.

Matthew Ward’s latest instalment in The Legacy Series is pure joy to read. This book has everything that will delight fantasy readers. Exhilarating battle scenes, political intrigue, Gods walking the land and a scope of utter Epicness!

I cannot tell you how much I adore this series. When I read Legacy of Ash I gave it five stars, Legacy of Steel firmly blows the previous book out of the water and shatters all my expectations.

In this second book, Ward’s narrative gripped me from beginning to end. Building on the story that he had established in Legacy of Ash. He develops his characters superbly, bringing to the fore some of the minor players from the previous book and giving them major roles on the impact of the story.

One of the main things that I love about this book are the characters. For me they simply walk off the page and reside firmly in my imagination. He masterfully builds on the relationships of the characters, such as the touching and, often laugh out loud funny, friendship between Captain Kurkas and Anastacia.

In Legacy of Ash, Ward introduced the Crowmarket. A shadowy league of assassins and cutpurses. In Legacy of Steel, the Crowmarket becomes a more prominent entity in the story and attempts to influence the City of Tressia. With this storyline, this gives Ward the opportunity to turn his spotlight the structure of the Crowmarket, but it also  focusses on Apara, who with her Raven Cloak, is a fantastic character and we join her on her journey as she changes and develops.

Now one of the standout characters for me in the first book was The Raven. He immediately captured my imagination and joy of joys, he gets so much more of a role in this book. I was hopping off my seat in excitement every time The Raven walked on to the page. He’s more of a God of Mischief than the customary resolute figure of Death.This is left to Jack O’Fellhaven (not to spoil it, but this will become apparent when you read it). In this book the Gods become more involved and we get more of an insight into the gods of Aradane as we are introduced to the full pantheon of the Gods and the realm that they rule. I really like Wards representation of The Otherworld, it reminds me both of the Celtic and Faerie mythos that I love and incorporates elements of British Folklore that I am fascinated by.

However, not only are Apara and The Raven’s characters expanded, but Sidara, Malachi Reveque’s daughter, and Roslava both have storylines that are absorbing and captivating at the same time.

And for me, that is one of the things that has pulled me into this story. Ward doesn’t waste a single character, he uses them all to build the wall of his plot, each one a foundation to the narrative that he carefully constructs.

As if that isn’t enough, Ward’s action sequences are incredible and so well paced. There were many times I had to stop myself punching the air in exhilaration when he was in full swing describing the battle sequences. They are so blood pumpingly well written, that you feel that you are front and centre of the action, dodging the swords and arrows as they rain down on everyone around you.
I simply did not want this book to end, and if I had a time machine, I would send myself forward to the moment that I am holding Ward's third book in my hands and continuing this captivating journey with the characters of the book, and seeing how this series will end.

Mind you, I don’t think I want it to end!