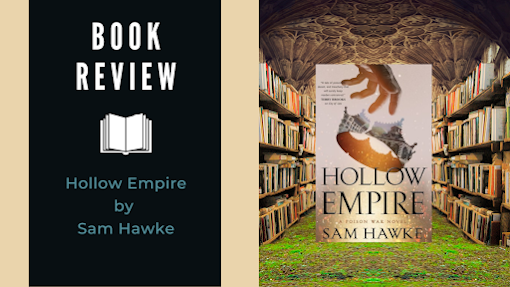 Some information about the bookHollow Empire is the second book in Sam Hawke’s series of books ‘The Poison Wars’ and takes place two years after the events of the first book.

When City of Lies ended I found myself with more questions than the book answered, with Jovan & Kalina as perplexed as I was as to the reasons why the events of the first book took place. I knew there was more to the story and Sam Hawke skillfully left me hanging with a cliffhanger, and in this, the second book, Hawke answers this question and the reasons why. And it may not be what you thought.

I have to admit. When I first started City of Lies, I wasn’t sure I was going to like it. For one, it took me a little while to get used to the two person narrative and the mystery element of the plot (me and mysteries don’t tend to get along). However, as I read more I did get used to it and City of Lies was a bit of a sleeper hit with me, so when I got a chance to read an advanced reader copy of Hollow Empire, I jumped at the chance. And I have to say, wow! I wasn’t expecting that .

As I said earlier, the book starts two years after City of Lies, and opens up with an opening line that is similar to the first book. Jovan has taken on an heir called Dija, the youngest daughter of his second cousin. And surprisingly, he has dosed her with some noxious substance as part of her training. As anybody who is familiar with the first book, Jovan is a proofer. A kind of poison taster for the Chancellor, Jovan’s best friend Tain, and this is the family business.

Now this is going to be a bit difficult, because if I reveal something here, it kind of spoils the first book, and whilst I suspect that there might be some people who have read this and know the end of City of Lies, there might be those people that are just coming to Hollow Empire without knowing there was a first book. So if you are in the former camp it doesn’t matter, but if you are in the second camp, turn back now - HERE BE DRAGONS.

So, all the gang is back together, Jovan, Tain, Kalina and Hadrea (although she doesn’t make an appearance until later in the book) and again the city of Silasta is in danger. However, this time instead of an all out revolution, this time the city is being subverted by a myriad of covert and seemingly unconnected occurrences.

Jovan is convinced that there is a plot afoot, but he has difficulty in proving it until things come to a head and inexplicable events take place that indicate Jovan’s suspicions have more value than any of them suspected.

Now, the strength of Hollow Empire is in its plotting, pacing and characters, and with these, Hawke really develops in both. I found this second book to be taken up a notch in all things really, The plot development is excellent. When I got to the final act and certain events revealed certain truths to the characters, I was like - I knew it. Yep, you didn’t fool me with that one Sam Hawke. And that is one of the strengths of the Hawkes writing. Yep, she gives you that one where you can feel all superior because you guessed that aspect of the plot, and then she totally blind sides you with something else and you are thinking Whoa! Did not expect that!
In terms of character development, nearly all the characters develop in some way. Jovan develops a relationship with his heir, the newly introduced DIja, and Dija is a fantastic new character. Kalina develops in her own way and also develops a relationship outside the family. However, Tain and Hadrea are a bit on the sideline in this one for some of the book, but when they do come into it, Hawke gives them the appropriate attention for them to develop and in a pretty satisfying way, I must say.

As I said, the other things that have been taken up a notch, is the plot and the pace. Hawke has really upped the game in Hollow Empire and there is all sorts happening. Shadowy plots, assassinations, magic and witchcraft and ultimately war. In this second book, you can really see the development. The plot is as twisty and turny as anything that you would find in any non fantasy thriller book and the pace, once it gets going, is so high octane that it kept me firmly gripped to the edge of my seat.

One of the things that I almost forgot to mention is the world building. In Hollow Empire, the story is not so compact as the last book, which was mainly situated in one location. In this book, we get to see a more fully realised world that is populated with a multitude of cultures, languages, religions and races. That is not to say that it wasn’t there in the last book, it’s just that the plot of the story mainly revolved around the city more in the first book and in this book we step outside the city and see what the estates look like. .

The other thing that I like about Hawke’s books, is that whilst they are fantasy books, there are some very real world topics in there again, which I think is a particular strength of her writing, it impressed me in her last book and impressed me again. You can very much equate some of the topics that she covers to what is happening in the world now.

In the Hollow Empire, I have simply fallen hook line and sinker for this story. The plot is intricately woven and everything is so tight. The character development of the book is just glorious and the pace had my pulse racing and my head pounding with all the blind alleys that Sam Hawke leads us up. And just let me mention the end! That was one pretty magnificent ending that had me thinking yep, I enjoyed that.
Labels: Book Review