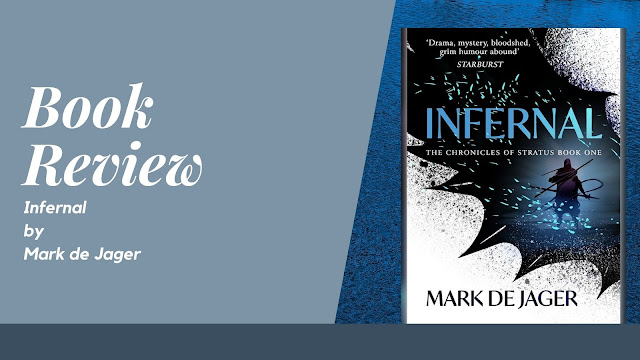 Marc de Jager’s ‘Infernal’ is a strange beast.The book is built around our hero (well anti - hero really) Stratus, who finds himself paralysed in a field with no memory of who or what he is. As vultures circle, and subsequently try to eat him because they think he is dead, he is saved by a roving band of travellers. From there we learn that Stratus is a hulk of a man who is very different from the land that he has found himself in.

Initially, De Jager’s story is confusing as the reader is plunged into the world of Infernal through Stratus’s eyes and we share the confusion and disorientation that our protagonist feels as he attempts to make sense of the world around him and the people who inhabit it.

What we learn in the first act of the story as Stratus stumbles around the country, is that Stratus is not necessarily a good guy. He will happily kill anyone that gets in his way (and he frequently does! The body count in the first few chapters is phenomenal!), and he will eat anything. And I mean anything! Including one of his victims' arms at one point.

This is a constant theme in the first part of the book. As Stratus wakes from his paralysis, not only does he navigate the world, but he also navigates the body that he inhabits, sometimes quite hilariously, sometimes pretty nastily at times. Subsequently discovering that he has strengths and powers that normal men do not possess. As we follow him on his initial journey, he learns that not only does he possess unnatural strength, but he also has unnatural abilities and an insatiable hunger.

In this first section of the book, we are as disconnected from Stratus’s character as he is from himself and the world around him. We flounder as directionless as our protagonist, until he gets his bearings, stumbling from one violent and bloody encounter to the next. However, when Stratus journeys to the city and meets Lucien and Tatyana the plot of the book starts to kick in.

Now it is hard to write a review without mentioning the plot as it is a reviewer’s mainstay to discuss how this affects him/her etc. But I am staying well away from the plot as part of the allure of this book is to read it blind, and discover the plot at the same time as our protagonist. If I discussed story mechanics, I think it would spoil it. But what I do advise as you are reading the first part, wondering where is this going? What is happening? Stick with it, as this shared experience with Stratus is what makes this book so good.

As the book is written in a first person narrative, the story and the world unfolds as Stratus experiences them. We learn what Stratus learns, and are with him throughout all of the book. Experiencing what he experiences, sharing his thoughts as he discovers different parts of the world he lives in, meeting the people that he meets and getting the impression of them through his eyes.

Because we are solely following  Stratus throughout the book, it would be pertinent at this point to discuss his character. Initially, it is very difficult to know what Stratus is, what his motivations are, but what we do get is that Stratus is going to maintain his own motivations, no matter what.

I’ve got to say, I did find Stratus kind of beguiling in his own way. He doesn’t lie, not even when he is telling Tatyana about his journey from the forest to the city, and at times the other characters find his honesty as brutal as his methods. At some points, he appears to have the simplicity of a newborn, and at others he is as cunning as a fox. He is a character of extremes and there is no in between.

Eventually, other characters are introduced and I liked most of these, Tatyana in particular and the reactions that she gives to some of Stratus’s actions and methods. At first Tatyana is as much of a mystery as Stratus, but as she becomes a more prominent figure in the action we learn that her and Stratus do share some connection. And again, it is best that I do not mention that connection here but let you discover it at the same time Stratus discovers it. Some of the other characters are a little two dimensional, but they are to Stratus too, and as we are sat on Stratus’s shoulder this adds to the story as we are getting his impression of the characters.

Now, as I have mentioned, I came to this book completely blind and I think that this is the best way to come at it to be honest. Tonally, Infernal  kind of puts me in mind of Joe Abercrombie, in that De Jager is not shy of describing the main character's ability to kill and the flaws he possesses. But also similarly to Abercrombie, there is a dark humorous vein running through the story, and similarly I found myself chuckling at inopportune moments in this book.

Obviously, when I start to read a book I want to know about the author, and I was surprised to find that this is not really a new book, but is in fact a republish. It seems that the book was originally released in 2016 by Del Rey publishing. However, recently the rights for the book and its subsequent sequel (coming in May 2021)  have been obtained by Rebellion Publishing. Hopefully, this book will get the exposure that it deserves as I truly found this to be a wickedly enjoyable read.