Call of the Boneships by RJ Barker 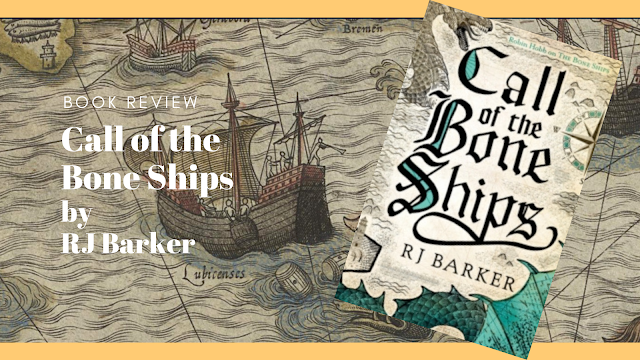 Some info about the book.

Title | Call of the Bone Ships

So it is, with any reviewer that we read books, and then we move on. In most cases, we love the books that we read. In some cases we don't, but above all we remember that the words that have been put in front of us are something that someone has put time and effort into. However, sometimes there is that special book. The one that touches you in some way. The one that captures your imagination or pulls at your emotions. When I started my journey with the Bone Ships by RJ Barker, I was caught up in the imagination of the world that he describes. This brave new world with strange creatures such as the Gullaimes or the Arakeesians. A world that is filled with steel woven characters who are at once harsh and unforgiving, and yet can show tenderness and belief in others. So how could this be followed?

Could this be bettered? Could the world be expanded and what would happen next on the journey of Joron Twiner and the crew of The Tide Child.

Let me tell you, I did not expect this!

In Call of The Bone Ships, RJ Barker raises the sails of The Tide Child and takes us on a completely different path than the one you would expect. My goodness, this book is harsh! I simply couldn't believe what Barker puts his characters through in Call of the Bone Ships. He takes them through ferocious maelstroms and when they come out, they come out as different people.

With most of the world building done in the first book, Barker gives himself the freedom to hit the ground running with the second book and the pace never lets up from there. In Call of the Bone Ships Barker expands the world as the foundations have already been laid.

We are immediately thrust into the narrative of the story and are placed into a tale that is full of high crested waves. Barker chucks everything at you with as much ferocity as the seas that The Tide Child sails in, leaving you just enough time to breathe before the next wave takes your breath away.

It is very difficult to discuss the plot as to do so would take away the enjoyment that you experience as you plough your way through Call of The Bone Ships, but my goodness, this is such a masterfully crafted tale that Barker tells. So much happens in the book it is difficult to recall how many things are going on. And that is the beauty of the book. Barker doesn't explain every little detail, he trusts that you will keep the pace and that you will keep up with him as events happen one after the other.

Of the many things that occur in this book, we must talk about the structure of the book. There are so many things structurally that had me exclaiming 'Oh that's clever'.

In The Bone Ships, the story is told through Joron Twiners eyes. However, in Call of the Bone Ships, Barker introduces other points of view and he phrases them as little Vignettes within the story, such as telling the story of the Courser Aelleren, and how they were condemned to the the black ship, or when Lucky Meas undertakes a seperate mission and he describes the events that happen on diary format. It works so well.

And at other points he will use repetition as a device to increase tension, employing the same phrase repeatedly to convey a sense of urgency to the situation.

The book is just gorgeous (you'll have to excuse, I have just finished the book and I seem be having an attack of the emotions after finishing), but be prepared. Call of the Bone Ships is hard, really hard. I don't mean in the reading sense, but in the emotions that the book evokes. Barker pulls no punches in Call of the Bone Ships. I found myself regularly fluctuating between shock and awe, between utter elation to the lowest doldrums as the story unfurls like the sails of a ship, and once the story catches the wind it glides through the pages of the book happily stealing the hours as I became completely engrossed in the book.

There is a fantastic quote by the great film critic, Roger Ebert that states that 'movies are like a machine that generates empathy, it lets you understand a little bit more about different hopes, aspirations dreams and fears. It helps us to identify with the people who are sharing this journey with us'.

The same notion, for me is applied to books, and this book certainly generated the emotions and empathy akin to watching a summer blockbuster, feeling the swell of excitement or the feeling of having the ground tilted at an angle so that you are completely blindsided by unexpected events. For me, this book is simply brilliant.

N.B. Thank you Orbit & Netgalley for letting me have an advanced reading copy of this book. The proviso is that I give a fair and honest review. I think the gushiness above covers it!