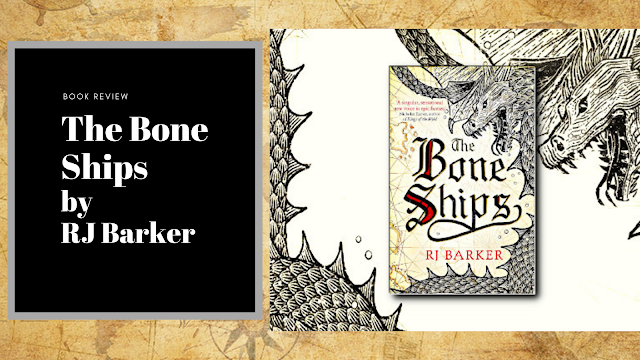 This is my first introduction to RJ Barker and I have got to say that I am pretty impressed. It’s not that I expected the book to be anything but brilliant. However, I didn't know what to expect really and The Bone Ships really surprised me.

The story takes place on The Tide Child, a black ship of The Hundred Isles.

At the beginning of the book, we are introduced to the main protagonist, Joron Twiner, the hapless ship wife (Captain) of The Tide Child. As he is on land, he is challenged to a duel by Lucky Meas Gilbryn and thus we are introduced to the world of The Tide Child, the blackships and the fleet of The Hundred Isles and the adventure they are about to embark on protecting a great Arakeesian, the last of the legendary sea dragons that populate the oceans of The Hundred Isles.

This is an incredibly imagined and strange world that Barker has set his story in and is quite different to the ones that readers are used to. In the first part of the book, Barker gives us some major worldbuilding, describing the Hundred Isles and its culture. The world is populated with all manner of strange things, the plants, the animals and the people.

This is a harsh and menacing world and there is no place for weakness and any form of feebleness quickly perishes. However, not only is the world harsh and unforgiving, its people are of a similar nature. One of the aspects of the people that live in the Hundred Isles is that there is a high level of congenital deformity and those who are able to give birth to undeformed infants are highly prized in this culture. In addition to people of the Hundred Isles, there are the Gaunt Islanders, and we learn that the people of the Hundred Isles have been engaged in a never-ending war with them for hundreds of years.

Not all of the people in this land though are people, or more accurately humanoid. There are the Gullaime. A race of bird like people who are prized for their magical ability to control the wind. The Gullaime are treated as slaves and are blinded at birth for their ‘own protection’ and are treated as outcasts on the ships of the fleet, only used for their supernatural feats of managing the winds.

Now I have to say that I loved Barker's world, and I found it very redolent of 1970’s British SciFi / fantasy movement, in that he has used some of that experimental energy from the movement to create a world that is unforgiving and menacing, and at once quite original. As I said it is a harsh environment in every sense of the word and every aspect of it has an opaque menacing quality to it. And on top of that, it has a sense of dankness about it, and Barker constantly describes the dirt, grime and stink of it.

I really found the characters of the book to be utterly absorbing. From the first page to the end of the book, the characters are front and centre of this story. The story’s main protagonist, Joron Twiner is introduced from the very first line and this is who we follow throughout the whole of the book, we get his thoughts, his insecurities and join him on his journey from an inadequate hapless individual who has been thrust into a situation not of his making to someone who grows in his confidence and abilities. I can’t say that when I met Joron Twiner at the beginning of the story that I actually liked him. He is a man that has been sent to the Tide Child to join the crew of a Black Ship, which is essentially a place where people are sent to die. And we get the impression that Joron is indeed a man who has joined the living dead. He is an inadequate commander and when he loses his duel with Lucky Meas and she forcibly takes over the ship, we learn that not only is he hopeless, but he is the conspirator of his own inadequacies and has let the crew of the Tide Child basically govern themselves. However, as the story moves on, Joron begins to grow. Instead of killing him in the duel, which is what usually happens in this world, Meas makes him second in command and moves against tradition. We don’t know why,and neither does Joron, and whilst at the beginning of the book he hates this interloper who has taken his crown from him. He soon learns to respect and admire Meas and her harsh methods.But not only does she turn the crew from a bunch of worthless, hopeless set of miscreants, but she also turns Joron into a respected officer by giving him trust and in her own way encouragement.

Meas is an interesting character. She is a hard woman on the outside (and inside at times) but she is fair and trusting. We never really get to see her whole motivations for the decisions that she makes, but you get the impression that she is fighting for a new way, a fairer way that is inclusive of everyone.

But this book is not just made up of Joron Twiner and Lucky Meas Gilbryn, there is also the crew of the Tide Child. At first, they are a nameless and characterless bunch (and I think that they are done this way purposefully due to the fact Joron Twiner at the beginning of the book never bothered to learn their names). As we move through the tale, the crew starts to take on a more colourful character. We get to learn individuals and their names as Joron begins to learn them and they become an integral part of the story.

And we cannot forget the Gullaime, the strange bird like creatures that perform the magic of controlling the wind. At first, the Gullaime refuses to interact and when Meas fails to get the thing to do as she bids, she tasks Joron to befriend the creature. Although he hates it, he does as she commands and an unlikely friendship develops between Joron and Guillame.

The other thing that impressed me was Barker’s ability to write bone crushing action scenes, particularly the naval battles. The action scenes are written so smoothly that at times I forgot I was reading words on the page and I could see every battle in my head.

I found R. J. Barker’s book to be utterly charming in its own way. Yes, it is set in a very different fantasy world, but it is not inaccessible, although there is a steep learning curve involved. For me, I found the book to be about journeys, not just the journey of the boat, but the journey of Twiner and the crew as they all move from being unwanted and unloved to having a sense of pride and purpose. Whilst the book is filled with hard edges, there are lots of moments of tenderness peppered throughout.

Barkers ability to write engaging prose is something of a wonder. He writes so self-assuredly that he transported me from my normal comfy chair in the living room, and onto the deck of the Tide Child where I could practically feel the salty sea spray hitting my face and the brine encrusted winds coursing through my hair.