City of Lies by Sam Hawke 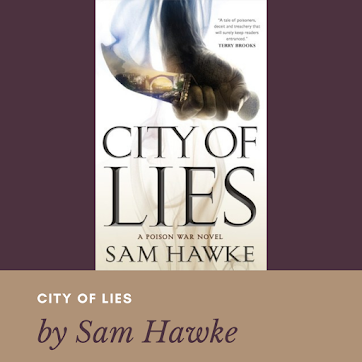 WINNER of the Ditmar Awards for Best Novel and Best New Talent, the Norma K Hemming Award, and the Aurealis Award for Best Fantasy Novel!

Sam Hawke’s debut, City of Lies was originally released in 2018. It tells the story of it’s three main characters, Jovan, Kalina and the soon to be Chancellor, Tain. The main backdrop of the story takes place in the city of Silasta. A city that lives in hubris and ignorance, and as the book unfolds you get a clear picture of how this affects the population.

As an opening line, Hawke starts with one of the most memorable first lines that I have read, ‘I was seven years old the first time my uncle poisoned me’, and from that we are introduced to the world of Jovan. One, in a long line of proofers, who maintains the safety of the leader of Silasta, the Chancellor, by having an ability to recognise the multitude of poisons that may kill a person.

What we learn from there is that this is the family business and Jovan is trained extensively by his Uncle Etan to recognise the different poisons, form an immunity and develop his ability to fashion antidotes for these deadly substances.

The drama begins innocuously enough with a series of seemingly unrelated events. However, as the plot unfolds, Jovan, Kalina and Tain are thrust into a world of intrigue, murder and secrets as both Jovan and Kalina’s Uncle Etan and Tain’s Uncle, the Chancellor, are poisoned.

Tain is thrust into the role of Chancellor, and whilst the city turns out to mourn the loss of the leading ruler of Silasta, an unknown army of invaders besieges the city. Without an army to protect them, the inhabitants of the city must band together to defend their city against an enemy that will not listen to reason or to their pleas of negotiation.

In City of Lies, Hawke presents us with an interesting take on the city under siege tale, instead of focussing on huge epic battles (there are some in there for all you battle mad readers!), she instead focuses on the small scale wars. The hunt to find the poisoner and the perpetrators of the plot against the city, who are sure to strike again. She also focuses on the reason for the siege and how and why this happened. What Jovan, Kalina and Tain learn, is that the demands of the city and its treatment of its people are the direct cause of this situation.

The story is a first person narrative, told from the POV of Joran and Kalina and we watch the events unfold through these two characters eyes and whilst they describe the events that take place, we also watch as they develop in their roles and as characters.

Interestingly, whilst Hawke bases her story in fantasy, she brings real world problems into the story. Both of her characters are affected by illness in some way. Jovan describes symptoms of OCD and anxiety, whilst Kalina is affected by an unknown condition that causes her fatigue. Hawke raises some pertinent issues in these two characters. With Jovan, his OCD is part of him and even though he has a mental health problem, he is able to function in society and perform a valuable role in addition to dealing with his difficulties, not despite his mental health issues. However, she presents us with a differing view of Kalina in that her problems are more physical, and Hawke explores how other people view disability and how they see that a person with disability should fit into that role.

Additionally, she brings in wider issues, such as climate change, the effect of disregarding tradition and also the treatment of other cultures.

Hawke’s whodunnit approach is a good read and as the plot reveals its layers, the story twists and turns leading you in one direction and then the other. She weaves character development and world building in an accomplished manner, carefully constructing the world around her characters. At no point does she give any inkling of how the story ends, but when it reaches its conclusion, you are left satisfied with how it turns out.
Labels: Book Review