Epic Fantasy at its best 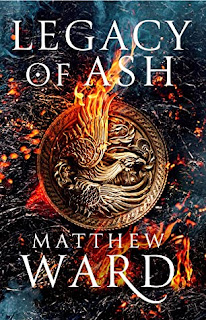 Matthew Ward’s debut novel is a grand sweeping affair that whilst being expansive, is a tightly knit story that weaves war, rebellion, magic, political intrigue and legacy into a compelling drama that is unputdownable.

The Tressian Republic stands at the centre of the world, yet it’s might is being tested. Rebellion threatens in the Southshires and Josiri Trelan, the son of the rebel Katya Trelan and now imprisoned in his own home, is gathering his forces so that he can lead the rebellion started by his mother 15 years ago and free his people from Tressia’s harsh rule.

Meanwhile, the Hadari Empire is rising, ready to overwhelm the empire and become the leading power in the world bringing war and death

However, underneath the waves of military upheaval, a dark power is stirring. Gods walk the world, choosing their champions and setting in motion their own plans.

Ward’s tale is magnificent in its scale. The scope is an entire world, and yet, he can seamlessly change his focus to the smallest aspects of his tale and concentrate on the minutest aspects of the drama, like Revekaah and Kurka’s tale in the woods during the titanic battle against the Hadari, or Calenne’s story under the battlefield as she discovers terrible secrets.

The cast of characters is impressive, although at times this can become confusing, and sometimes if I took my brain off the plot for a second, I was left wondering what was happening and had to go back a page or two to reconnect. However, the book demands your attention and concentration, and if you feed the story well with these two things, you will be richly rewarded.

The characters themselves are excellently written, with the Lady Ebigail being a standout of scheming and general maleficence. However, she never once falls into parody as she joyfully plots and weaves webs of intrigue, murdering, blackmailing and manipulating anyone who gets in her way.

The other players in this book are Viktor Akadra, the champion of the Tressian council. A knight who gains this title after he kills Josiri and Calenne’s mother, Katya. Viktor is an interesting character, portrayed as a stoical villain initially, yet as the story progresses, his character is explored more, and we learn that his character is more faceted than we originally thought, and Ward plays with these facets to great effect. An especially touching aspect, is his relationship with Calenne, who originally believing him to be the monster who killed her mother and haunts her nightmares, forms an unlikely friendship and even allies with him to save the Southshires after she learns the truth of her mother’s death. In fact, far from being the monster and killing machine that he is believed to be, Viktor is a thoughtful, socially anxious man that is afraid of his own shadow (that part will become clear!)

Calenne, is the other prominent figure of the story. At first, she is portrayed spoilt brat of a child that generally mopes around her prison, dreaming of a way out, even if it is by dying. She is afraid of the legacy that her mother, the hero of Southshires has left her, and yet when the need arises, she wears this persona to motivate others around her. Again, Calenne is a rounded individual that has flaws, and at times shows that she can be as manipulative as Lady Ebigail, in order to get what she wants.

And then there’s Josiri, an ineffectual leader who dreams of freeing his family from the past. At times, Josiri can be the strong leader that is needed. However, other times he can be impulsive and not recognise the consequences of his behaviour. But, as with Viktor, Ward brings him to life showing us that his character has more sides than a twenty - sided dice.

Additionally, the main characters are bolstered by equally memorable side characters, like Anastacia, either an angel or a demon, depending on which characters point of view. And, the gods themselves, with some memorable cameo roles by the God of Death, known as the Raven, who reminds me in some parts of Baron Samedi crossed with old Father Time, a Herne the Hunter type figure who makes an infrequent appearance in the story and the capricious, Ashana

Don’t be put off by the fact that this is a weighty book and the fact that the plot simmers for the first part of the book. When the gears are turned up, the story explodes and gallops along at full speed.

As with every other aspect of this book, Ward skilfully manoeuvres his cast of characters around the chessboard of his plot, carefully placing them where they need to be so that we reach the finale of the story. He carefully weaves plot, pace and characters, all the while building a richly complex world, magic system and mythology that will surely delight fans of epic fantasy.